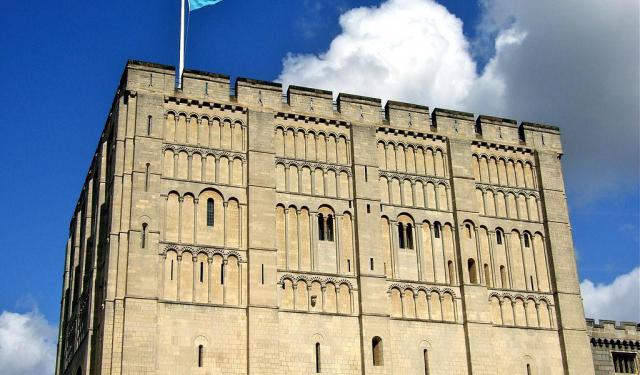 Image by Pipin81 on Wikimedia under Creative Commons License.

Norwich is a large, wonderful city in England with many fascinating points of interest. If you want to know more about English culture and history, be sure to check out the following tour of Norwich’s most impressive museums and art galleries.
How it works: Download the app "GPSmyCity: Walks in 1K+ Cities" from iTunes App Store or Google Play to your mobile phone or tablet. The app turns your mobile device into a personal tour guide and its built-in GPS navigation functions guide you from one tour stop to next. The app works offline, so no data plan is needed when traveling abroad.

Dragon Hall is a Grade 1 listed medieval merchant's trading hall located in King Street, Norfolk close to the River Wensum. The Great Hall was built between 1427 and 1430, but some parts of the site, such as the undercroft, are older. Archaeological research has shown evidence of 1,000 years of human habitation on the site.

Dragon Hall was built by a merchant called Robert Toppes as the hub of his international trading empire. The Great Hall is the centre piece of the site with its magnificent crown post roof which contains an intricately carved dragon on one of the spandrels, which gives the building its name. This was where Toppes displayed goods from home and abroad to other English and European merchants. Dragon Hall is unique because it is the only known surviving building of its type built by one man for his own use rather than by a Guild. The building operated as a showroom and warehouse for about 30 years. Dragon Hall is managed by a small team of staff and relies on the support of a large body of volunteers. It operates as a heritage museum and is also a venue for all sorts of community, cultural,and learning activities such as weddings, parties, theatre and music, markets, school visits and workshops.

Image by Mn on Wikimedia under Creative Commons License.
Sight description based on wikipedia
2

Norwich Castle is a medieval royal fortification that was founded in the aftermath of the Norman Conquest of England when William the Conqueror (1066–1087) ordered its construction because he wished to have a fortified place in the important city of Norwich. It proved to be his only castle in East Anglia. It is one of the Norwich 12 heritage sites. The castle remains a museum and art gallery today and still contains many of its first exhibits, as well as many more recent ones.

Two galleries feature the museum's decorative art collections, including costume, textiles, jewellery, glass, ceramics and silverware, and a large display of ceramic teapots. Other gallery themes include Anglo-Saxons and Vikings, Queen Boudica and the Iceni tribe, Ancient Egypt, and natural history. The fine art galleries include works from the 17th to 20th centuries, and include English watercolor paintings, Dutch landscapes and modern British paintings. G. T. Clark, a 19th-century antiquary and engineer, described Norwich's great tower as "the most highly ornamented keep in England". It was faced with Caen stone over a flint core. The keep is some 95 ft (29 m) by 90 ft (27 m) and 70 ft (21 m) high, and is of the hall-keep type, entered at first floor level through an external structure called the Bigod Tower.


Image by Philip Halling on Wikimedia under Creative Commons License.
Sight description based on wikipedia
3

Talented local artist Gena Ivanov runs and works out of the Norwich Studio Art Gallery. His popular work can be found here, as well as a host of other artists’ work. You will find oil paintings depicting Norwich life and cityscapes, portraits and much more here. Its collection includes sculptures by Cherrill Edgington and nude sketches by Matthew Kleinman. It is open Wednesday through Saturday from 10:00 am to 5:00 pm.
Image by Norwich Studio Art Gallery under Creative Commons License.
4

Erected in 1320 and one of the oldest and most fascinating buildings in the city, here guests can discover life from Tudor to Victorian times. Its wide variety of historic exhibitions are loaded with interesting information, including who the Strangers were.
Image by Flight Fantastic on Flickr under Creative Commons License.
5

Opened in 1965, Mandell’s is one of Norwich’s most significant galleries. Featuring a beautiful collection of works from English and European artists from the 19th century to today, this gallery is quite proud of its items by Jeremy Barlow and P. C. Dommerson. In addition to paintings, you will also find sculptures an photographs on display here.
Image by Jeremy Barlow on Flickr under Creative Commons License.
6

Opened in 2004, the Outpost Gallery features contemporary art by various artists and solo exhibitions by local ones, including sculptures, paintings and photographs. Offering twelve exhibitions a year, a new one on the first day of each month, this gallery also offers a variety of art-related events.
Image by See-ming Lee 李思明 SML on Flickr under Creative Commons License.
7

Overlooking the riverfront, the John Jarrold Printing Museum, established in 1980, is located in the former St. James Mill building. It contains a vast collection of printing machines, lithographic hand presses and films about the history of printing. Fascinating information about the first printed book, the Gutenberg Bible, is also found here.
Image by NYC Wanderer on Flickr under Creative Commons License.

Containing a wide assortment of churches and cathedrals, Norwich has much to be proud of when it comes to its religious heritage. Each one is beautifully decorated and has its own story to tell. Check out Norwich’s most fascinating religious edifices in the following tour.