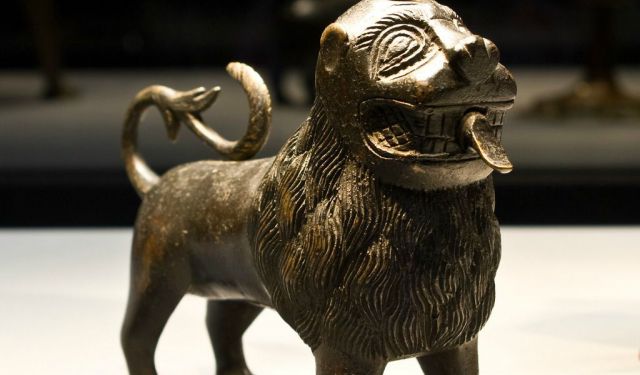 Image by Pachango on Flickr under Creative Commons License.

Utrecht is one of the top touristic destinations in Netherlands. Thousands of tourists visit it every year. The city is famous for its lovely Museums. Most of them can be found in Museum Quarter. This tour will lead you to some of the best known museums in Utrecht.
How it works: Download the app "GPSmyCity: Walks in 1K+ Cities" from iTunes App Store or Google Play to your mobile phone or tablet. The app turns your mobile device into a personal tour guide and its built-in GPS navigation functions guide you from one tour stop to next. The app works offline, so no data plan is needed when traveling abroad.

Museum Speelklok (previously Museum van Speelklok tot Pierement) has a collection of automatically playing musical instruments, most of which still work and therefore still can play their music. Among the instruments on display are music boxes, musical clocks, pianolas, barrel organs (including the typically Dutch large street organs) and a turret clock with carillon. The word speelklok means musical clock.

Over the years the museum has become popular nationwide and also internationally. The museum's restoration workshops are a leader in their field, and are known for their excellent standards.

The museum had its origins in an exhibition of mechanical organs and other musical automata in Utrecht in the summer of 1956. The great success of this led to the creation of a permanent national museum dedicated to mechanical musical instruments. In 1984 the museum's present housing in the central medieval Buurkerk (citizens' church) was officially opened by Queen

For its 50 year Jubilee in 2006 the museum held a special exhibition, "Royal Music Machines". For this event, various renowned museums, including the Hermitage Museum, the Louvre, the Metropolitan Museum of Art in New York, and the Kunsthistorisches Museum in Vienna, loaned very special instruments.


Image by celesteh on Flickr under Creative Commons License.
Sight description based on wikipedia
2

The Catharijneconvent Museum is the national museum of religious art. Located in the former Catharijneconvent, the museum was established in 1979. Its collection includes works of religious art of the Catholic Archbishopric of Utrecht, located in the convent until 1979. Its extensive amount of historical and art objects from the early Middle Ages to the present includes Protestant and Catholic art and information on their impact of on Dutch society. The collection includes bookbindings decorated with precious stones, richly-worked images, paintings, altarpieces, clothing and ecclesiastical objects in gold and silver. One of the highlights of its collection is ivory work from the early medieval Lebuinuskelk.
Image by Pachango on Flickr under Creative Commons License.
Sight description based on wikipedia
3

Universiteitsmuseum Utrecht is a stylish building designed with a beautiful glass façade that attracts many passersby. It contains many unique historical objects, some unusual like the skeleton of flying dog, various fishes and exotic birds. Also, you will be impressed by the beauty of the 18th century orangeries and botanic laboratory.
Image by Victor van Werkhooven on Wikimedia under Creative Commons License.
4

Centraal Museum’s collection, founded in 1838, was initially limited to art related to the city. In 1921 its acquisition merged with various private collections in a centralized museum located in the former medieval monastery at Nicolaaskerkhof. Currently, the collection consists of pre-1850’s art, modern art, applied art, fashion and historical objects of Utrecht, including the 1,000 year-old Utrecht Ship, which is part of the Stadsgeschiedenis collection. Another highlight are paintings by the Utrecht Caravaggians, such as Gerard van Honthorst and Hendrick ter Brugghen. Along with Joachim Wtewael, Abraham Bloemaert, Paulus Moreelse and Renaissance painter Jan van Scorel, this museum’s collection has international appeal.
Image by Japiot on Wikimedia under Creative Commons License.
Sight description based on wikipedia
5

Sonnenborgh Museum en Sterrenwacht (The Sonnenborgh Museum and Observatory), located on top of the ancient Sonnenborgh bastion since 1854, houses four large telescopes and welcomes visitors to enjoy the breathtaking view of the sky. Be sure not to miss out on this unique experience and gain memories that will last a lifetime.
Image by Japiot on Wikimedia under Creative Commons License.
6

Nederlands Spoorwegmuseum, the national railway museum, was established in 1927 and was initially located in one of the main buildings of Nederlandse Spoorwegen in Utrecht. At the time the collection consisted mostly of pictures, documents and other small objects. In the 1930s the first steps were taken to conserve old significant railway equipment. A portion of this collection was lost during World War II. The current collection is too large to be shown in full in the limited space available, but rotates on a regular basis. Most of the trams were dropped from the collection in the 1990s. Its collection contains, among other things, steam, electric and diesel locomotives, train cars, freight cars and several trams.
Image by T Houdijk on Wikimedia under Creative Commons License.
Sight description based on wikipedia
7

The Voor het Kruideniersbedrijf Museum, also known as the Grocery Museum, is located in the heart of Utrecht. Though it resembles a small shop, it houses a great variety of original tins and grocery packaging. Downstairs you’ll be met by lovely ladies dressed in traditional clothing selling sweets and tea in decorative cups. Visitors are given the advice to add sugar cubes, hot milk and licorice flavoring as it is a Dutch tradition.
Image by cocoinzenl on Flickr under Creative Commons License.
8

In the shadow of St. James the Great Church the neighborhood museum welcomes visitors to discover the history of Wijk C. It contains artifacts over a thousand years old, including paintings, tools and other objects. By way of multimedia presentations, guests can witness the development of the Wijk C neighborhood, which was once the city’s leisure center. After a period of decline and deterioration, a protest was held which led to its renovation.
Image by T Houdijk on Wikimedia under Creative Commons License.

Create Your Own Walk in Utrecht

Creating your own self-guided walk in Utrecht is easy and fun. Choose the city attractions that you want to see and a walk route map will be created just for you. You can even set your hotel as the start point of the walk.

Utrecht’s religious buildings will amaze you with their beauty, design and fascinating history. Some of them, such as Jacobikerk or Sint-Gertrudiskathedraal, are of interest for their role in the Dutch Reformation, which influenced the city’s spiritual life in many ways. Take the following tour to discover the best holy buildings Utrecht has to offer.

Among Dutch cities Utrecht has one of the richest collections of medieval buildings. A blend of Baroque and Gothic styles, Utrecht’s architectural styles have been dictated by the Reformation and the Dutch wars. Take the following tour to discover the city’s best architecture.

Utrecht, one of the largest cities in the Netherlands, is a tourist-friendly destination renowned for its numerous cultural and historic treasures. On this orientation walk you will climb 465 steps to the top of the Dom Tower, visit the best music museum in the Netherlands, as well as the legendary Oudegracht ("old canal") and other remarkable sites fit to make anyone's visit to...  view more

When it comes to great nightlife entertainment, Utrecht has a lot to offer. Downtown, namely the Oudegracht area, is where most of the city’s nightlife is located, including such places as 't Oude Pothuys, Tivoli, Café België and much more. Take the following tour to discover Utrecht’s hottest nightspots.