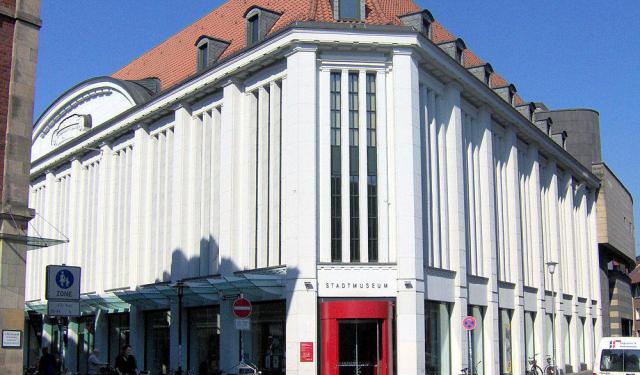 Image by Florian Adler on Wikimedia under Creative Commons License.

Münster is well-known for its long list of fascinating museums. This wonderful city can tell you much about history, archeology, geology, art, and other fields. Take this tour to get acquainted with its culture and discover the most interesting of Münster museums.
How it works: Download the app "GPSmyCity: Walks in 1K+ Cities" from iTunes App Store or Google Play to your mobile phone or tablet. The app turns your mobile device into a personal tour guide and its built-in GPS navigation functions guide you from one tour stop to next. The app works offline, so no data plan is needed when traveling abroad.

In business for more than 30 years, the Goeken art gallery has gained a reputation for showcasing true art. It exhibits all kinds or artworks, including drawings, sculptures, installations, architectural projects, and many others. Opening hours: Tuesday to Friday: 10 am – 1 pm and 3 pm – 6.30 pm; Saturday: 12 - 1 pm.
Image by sangiovese on Flickr under Creative Commons License.
2

The Archäologisches Museum Münster is part of the Department of Classical Archaeology and Early Christian Archaeology of the Münster University. The museum offers a deep insight into the fascinating world of the archeology, as well as demonstrates the research methods and tools. The exhibition mainly focuses on the ancient Greek history. The museum's foundation dates back to the 1883, when the first samples of its collection were assembled together. The greater part of this collection was made up of original ancient sculptures and some replicas from the Royal Museum in Berlin. The museum and its collection were seriously damaged during the Second World War and reopened only in 1958. The sculptures had become the basis of the exhibition, which was soon completed by other priceless works from both private and government collections. The significant part of the collection is composed of antique vases, coins, sculptures and many other curious objects of art and everyday life of the ancient Greeks.

The Geologisch-Paläontologisches Museum was established in 1824 and features the biggest collection of fossils from different geological areas in Germany. The bigger part of the exhibition consists of archaeological findings from the Westphalia region. It includes fossil remains of fish, remains of ice age mammals, a complete mammoth skeleton, as well as remains of a Iguanodon (a genus of ornithopod dinosaur), and many others. The museum also houses a marine life exhibition, that consists of Paleozoic corals, clams from the Cretaceous period, trilobites from the Cambrian period and many other interesting samples. During two centuries of activity, the museum's collection has grown from 5.500 to 31.000 objects, all of which are on public display.
Image by Rüdiger Wölk, Münster on Wikimedia under Creative Commons License.
4

Münster University's Bible Museum is located in the heart of the old city and tells the story of the Bible. The museum features original handwritten samples, as well as contemporary editions. The collection covers the main parts of the Greek New Testament, both manuscripts and printed samples, followed by exhibition of the Latin Bible, German translation of Martin Luther's works and other modern Bible translations. The museum also features biblical illustrations and full-scale replicas from the Gutenberg press. In April 2010, Bibelmuseum received Germany's largest private collection, which contained 379 bibles in Latin, 200 Greek and 16 multilingual bibles from the 16th to 18th century.
Image by Rüdiger Wölk, Münster on Wikimedia under Creative Commons License.
5

The Picasso Museum is located on Königsstrasse, one the most beautiful streets in old town, it sports several gorgeous aristocratic estates and many other architectural masterpieces. The exhibition is held within two splendid buildings, spanning across 600 square meters, it displays more than 800 of Pablo Picasso's lithographs. This museum is considered to house one of the biggest collections of Picasso's lithographic art in the world. The Picasso Museum was established in 2000 and since has noticeably expanded its collection, which now includes works of Marc Chagall, Georges Braque and Henri Matisse.

Opening hours: from Tuesday to Sunday and holidays: 10 am – 6 pm, closed on Mondays.

The Museum of Lacquer Art (Museum für Lackkunst) was established in 1993 and at the present moment features an absolutely unique collection of lacquer artwork from all across the globe. It exhibits samples from Southeast Asia, the Middle East and Europe; some of which date back to the 4th and 5th century BC. The museum demonstrates 2,000 years of lacquer art development and its route from the depths of China to the hot deserts of Persia and on to Europe. The collection consists of more than 1,000 lacquer artifacts, creating an unforgettable impression even on the most demanding visitor.

In addition to the ancient artifacts, the museum also showcases traditional and contemporary lacquer-work.

Image by Andreas Wieland on Wikimedia under Creative Commons License.
7

The Stadtmuseum was established on August 31st, 1982 and focuses on the history of Münster. This museum is one of the most popular spots in town, for example in 2005 the number of visitors reached a record mark of 100,000 and in 2011 this number noticeably increased to 113,000 visitors. Spread over two floors, its 2,500 square meters space is filled with items that tell the history of Münster's foundation and development. The museum exhibits models of the city of Münster during different stages of its history. Along with permanent collection, the museum systematically organizes special temporary exhibitions dedicated to the works of famous artists born in Münster, as well as to the various events that took place in the city. The Stadtmuseum also features an amazing photo-gallery, sampling old pictures of Münster and its inhabitants.
Image by Florian Adler on Wikimedia under Creative Commons License.
8

The Villa ten Hompel is a memorial site for offenses committed by the police and government administration during the National Socialist period in the city of Münster. It was named after its builder, the industrial merchant Rudolf ten Hompel from Münster, and was constructed around 1924. At the end of the 1990s the municipality of Münster bought the Villa in order to set up a memorial site dedicated to the research concerning the attitudes of police and public administration and the ways in which they carried out their work. Lord Mayor Berthold Tillmann inaugurated the first exhibition on the 13th of December 1999 in the presence of the Minister President of North Rhine-Westphalia, Wolfgang Clement, and the President of the Central Council of Jews in Germany, Paul Spiegel. Apart from the permanent exhibition “Im Auftrag” (“On Behalf Of”), the Villa presents exhibitions that deal with subjects such as National Socialist war crimes and police or administrative history. Besides the exhibitions, there is a library and archive specialized in these topics. The Villa works closely with the local university, with schools and with the police.
Image by STBR on Wikimedia under Creative Commons License.
Sight description based on wikipedia

West Munster offers a concentration of fascinating tourist attractions, like the Münster Zoo and Hippomax, the Botanischer Garten and an unique open-air museum. Take this two-hour tour to explore the most interesting sights in the western part of the city.

Münster is a city that will pleasantly surprise you with its green areas and numerous parks, most of which were built on top of former fortifications. Today these recreational spaces represent the pride and joy of the city of Münster. This tour gives you the chance to visit six of these wonderful parks.