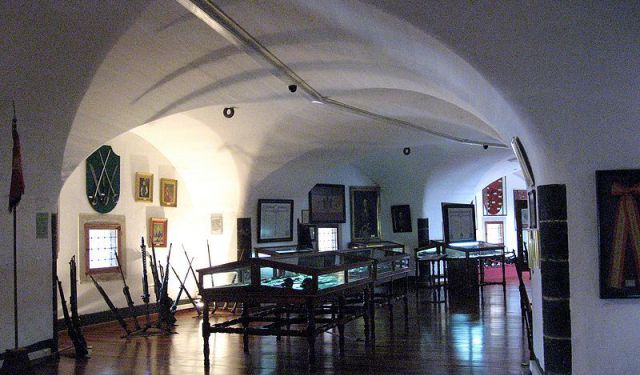 Image by Mataparda on Wikimedia under Creative Commons License.

Santa Cruz de Tenerife, the capital city, features a variety and multiplicity of museums and art establishments. These reflect the history and heritage of Tenerife Island. Museum of Nature and Man, Museo Municipal de Bellas artes, Museo Militar Regional de Canarias and TEA are world renowned. Explore the popular tourist attractions in their own right with this self-guided walk.
How it works: Download the app "GPSmyCity: Walks in 1K+ Cities" from iTunes App Store or Google Play to your mobile phone or tablet. The app turns your mobile device into a personal tour guide and its built-in GPS navigation functions guide you from one tour stop to next. The app works offline, so no data plan is needed when traveling abroad.

Museo de la Naturaleza y el Hombre is a museum based in Santa Cruz de Tenerife. It contains many significant archaeological finds and is considered the best repository of objects from the Prehispanic Canary Islands. The museum also houses significant paleontological, botanical, entomological and marine and terrestrial vertebrate collections, in an excellent state of preservation, and is considered the best Natural Library of the Canary Islands. The museum also integrates the Archaeological Museum of Tenerife, the Bioantropología's Canary Institute and the Museum of Natural Sciences of Tenerife.

The museum is located in the downtown area of Santa Cruz, in the former Civil Hospital, a building that constitutes an example of the neoclassical architecture of Canary Islands. The archaeological section was founded in 1958.The museum holds the largest collection on the culture of the Guanche and also has one of the most modern methods of presentation of mummies. It is also an internationally renowned museum and has participated in international meetings on archeology, but its fame is mainly due to its formidable collection of Guanche mummies. In 1992 the Museum of Nature and Man participated in an international research project on mummieswith a global exhibition of mummies. For this reason, the Museum of Nature and Man is a world reference in regard to preservation of mummies. It is also regarded as the most important museum of Macaronesia. The museum also exhibits a fine collection of ceramics and fossils of prehistoric animals both of Canaries and of the rest of the world, such as the giant lizard of Tenerife, the Tenerife Giant Rat and a megalodon shark tooth.

Image by Yo on Wikimedia under Creative Commons License.
Sight description based on wikipedia
2

Image by Mataparda on Wikimedia under Creative Commons License.
Sight description based on wikipedia
3

Centro de Arte La Recova (La Recova Arts Centre) is located in the former market building in the city centre. The building was designed by Manuel de Oraá in 1851. The structure features two identical symmetrical entrances in the main and back facades and a portico gallery that offers the potential of artistic expression. There is also an administration office of the City School of Graphic Arts. Started as a cultural space in 1992, La Recova is a significant arts centre providing display space for contemporary Canarien and Spanish artists’ exhibitions of all kinds. This emblematic art center in Santa Cruz holds twelve exhibitions a year, including the prestigious International Comic Exhibition. Admission is free. Gallery hours: Tuesday - Saturday: 11 am - 1 pm & 5 - 9 pm; Sunday: 11 am - 2 pm.
Image by Koppchen on Wikimedia under Creative Commons License.
4

The foundation of Museo Municipal de Bellas Artes (Museum of Fine Art) dates back to the end of the 18th century. Today it shares its location on 12 Calle JOSÉ MURPHY with the municipal library that is a repository of the Island's archives and Canarien Literature, next to Plaza del Principe. The classic style building was developed in 1929 according to the plan of architect Eladio Laredo. Its exterior features the busts of prominent people from Tenerife. Museo Municipal de Bellas Artes comprises 14 rooms that display an outstanding collection of art works from the Flemish period of the 16th century to the 20th century painting of Spanish and Canary artists. The museum fund and Prado Museum deposit are exhibited. The museum also welcomes temporary exhibitions. Admission is free. Museum hours: Mon-Fri 10:00-20:00; Sat-Sun 10 am-2 pm.
Image by Mataparda on Wikimedia under Creative Commons License.
5

Regional Military Museum is located in the historic Almeida Castle completed in 1884 occupying the Almeida quarter, in the northern part of the city. The museum was founded in 1988 and is one of the best Canarien cartography research centers, and a great depository of armaments and objects invoking the military history of the islands, with respect to the successful defence of the city. The most referred exhibit items are the El Tigre (The Tiger) artillery-type weapon and a scale replica of the flagship Theseus. There is also an exposition dedicated to the life of Admiral Nelson, a collection of flags as well as early paintings by Canarien artists. Museum hours: Tuesday - Friday: 10 am - 3 pm; Saturday - Sunday: 10 am - 2 pm.
Image by Russell Macdonald on Flickr under Creative Commons License.
6

Sala de Arte Los Lavaderos (Los Lavaderos Art Gallery) is located at the Hotel Mencey situated at the corner of Calle Pintor Jose Aguia and Calle Carlos Chevilly. This very unpretentious building of 1839 was once a washhouse of the city. The old structure remains intact and its hall makes use of the original basins and its structural features. An open-air interior courtyard is also used for exhibits. The gallery has paintings, sculptures and installations of Canarien artists. They hold about a dozen exhibitions a year. Gallery hours are Monday through Saturday from 11:00am to 1:00pm and from 6:00pm to 9:00pm.
Image by Kris Jordan on Flickr under Creative Commons License.