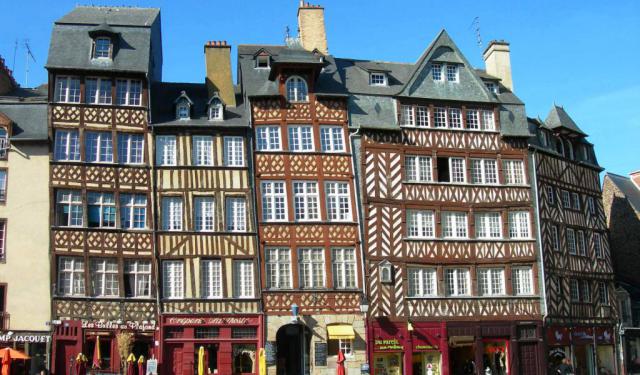 Image by The Yorck Project on Wikimedia under Creative Commons License.

In business since 1986, the Oniris gallery has become a landmark of contemporary art in Brittany. With the works of twenty artists on exhibition every three years in Rennes, Oniris represents many international artists such as: Aurelie Nemours, Vera Molnar, Norman Dilworth, Farncois Morellet, Alain Clement, and many more.

The gallery is open for you from Tuesday to Saturday, 2 pm – 7 pm.

Image by Claude Viallat on Flickr under Creative Commons License.
2

Established in 2005, Galerie Laute is located on Rue Bertrand in Rennes. Since its foundation, the gallery displays unique and original works by contemporary artists; including painters, sculptors and designers. The exhibitions change every month and the art works are selected according to quality, diversity and artistic personality.

Image by guymoll on Flickr under Creative Commons License.
3

Located on Rue Saint Guillaume, Galerie Divet is a place that has something for every one. The gallery specializes in Breton paintings, sculptures, ceramics, art from the 19th and 20th centuries, and more. Galerie Divet also buys and sells art works.

Image by webtreats on Flickr under Creative Commons License.
4

4) Museum of Fine Arts of Rennes (must see)

The Museum of Fine Arts of Rennes is a municipal museum whose collections range from ancient Egypt antiquities to the Modern art period and make the museum one of the most important in France outside Paris, notably for its paintings and drawings holdings.

The museum was established in 1794 during the French Revolution like most of the main French museums. Its first collections were the confiscated artworks of the churches and public buildings of Rennes. However the majority of the present holdings come from the private collection of Christophe-Paul de Robien, a president of the Parlement de Bretagne, which was at the time of the Revolution one of the largest of its kind in Europe. It comprised drawings, prints, paintings, antiques and sculptures. The museum's collections continued to expand during the 19th and the 20th century thanks to donations and acquisitions. The building housing the museum was built between in 1847 and 1855 but it is only since 1911 that it is entirely devoted to the museum's collections. The building and the exposition rooms have been restored and modified several times.

The painting collection include artworks created between the 14th century to the 20th century. The drawings holdings are one of the treasures of the museum as they include very valuable pieces and rare names, mainly thanks to the Robien collection.
Image by XIIIfromTOKYO on Wikimedia under Creative Commons License.
Sight description based on wikipedia
5

La Criée is a center for Contemporary Art whose main responsibilities are to support creative activity, hold temporary exhibitions and provide support to artists from both Brittany and abroad. The center has several programs, one of them is called “Art at the Centre”. It specializes in exhibitions and holds four or five exhibitions of new works each season.

6) Museum of Brittany (must see)

Located at Cours des Alliés, the Museum of Brittany is a real treasure trove for those who want to get a broader understanding of Brittany. It hosts three permanent exhibitions focused on the region, its history and its people. The first exhibition features audio-visual material about Brittany in general; the second one takes us back in time and walks us through the history of Brittany; and the last exhibition presents Captain Dreyfus, who was accused of spying for Germany. The Museum of Brittany also holds 2 temporary exhibitions.