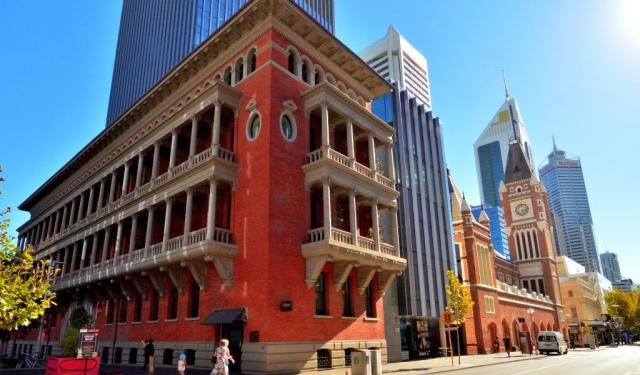 Image by Samuel Wiki on Wikimedia under Creative Commons License.

Museums and Galleries (Self Guided), Perth

Perth attracts lots of visitors because of its numerous museums and galleries, which showcase all aspects of Perth's present and past. Visiting this city's museums and exhibition areas, will bring you closer to its culture and historic heritage. Some of the most famous museums and galleries of Perth are listed below:
How it works: Download the app "GPSmyCity: Walks in 1K+ Cities" from iTunes App Store or Google Play to your mobile phone or tablet. The app turns your mobile device into a personal tour guide and its built-in GPS navigation functions guide you from one tour stop to next. The app works offline, so no data plan is needed when traveling abroad.

Gallery Central is part of the Institute of Technology, formerly known as the Central TAFE Art Gallery. Designers, artists, craftsmen, and musicians are invited to use the premises for their exhibitions. The Gallery Central expositions change constantly.

Image by Nachoman-au on Wikimedia under Creative Commons License.
2

Perth Institute of Contemporary Arts is a contemporary visual and performance arts venue housed in a heritage building at 53 James Street, Northbridge. The building, which dates from 1896, was for 40 years the Perth Boys' and Girls' School. The Perth Institute of Contemporary Arts building was designed in the Federation Free Classical style. The exterior features prominent decorative elements but, overall, displays a degree of restraint appropriate to a serious academic institution.

The physical evidence confirms that main boys' and girls' entries were given particular emphasis in their level of detailing, but that the building was clearly designed to be seen in the round. The external walls are constructed of face brick in stretcher bond, with a random stone plinth below ground floor level. On the northern side of the building the stone plinth is below the present street level. The decorative detailing is focused along the eaves and around the entry porches and window openings. The building has a corrugated iron, hipped roof with a raised section over the central gallery space. There are wide eaves with timber slats to all sides. The corrugated iron roof has been reclad and no chimneys or roof vents are visible, but the majority of the down pipes and rainwater heads appear to be original.

Image by Nachoman-au on Wikimedia under Creative Commons License.
Sight description based on wikipedia
3

Operation hours: Wednesday to Monday: 10 am - 5 pm.
Image by Nachoman-au on Wikimedia under Creative Commons License.
Sight description based on wikipedia
4

The museum focused its collecting and research interests in the areas of natural sciences, anthropology, archaeology and in Western Australia's history. Over the 1960s and 1970s it also began to work in the then emerging areas of historic shipwrecks and Aboriginal site management. Throughout the Western Australian Museum's history the prominent James Street location has remained central to the Museum's identity and where many large permanent and touring exhibitions have been housed. Most recently the international blockbuster exhibition A Day in Pompei was displayed from 25 May - 12 September which attracted more than 110,000 people.
Image by Nachoman-au on Wikimedia under Creative Commons License.
Sight description based on wikipedia
5

The Fire Safety Education Center and Museum, showcases all kinds of firefighting equipment that has been in use in for the past 150 plus years. The collection is complemented by active corps of firefighters. It is situated in the fire station which was established in 1901 and, in its time, was one of the most advanced in the country.
Image by SeanMack on Wikimedia under Creative Commons License.
6

Francis Burt Law Museum is situated inside the Old Court House, one of the oldest buildings in the city. The items showcased here are related to the history and development of law in Western Australia. Some of them dated from 1616. The museum also functions as an educational and research facility.

The Museum of Performing Arts is located downstairs, in His Majesty's Theater, and holds a collection of more than 25,000 items. It includes photos, posters, sound tapes and wonderful theatrical costumes, taken from the backstage storage area. All of them show the history of theatrical entertainment. The exhibitions are constantly changing so there's always something new to see.