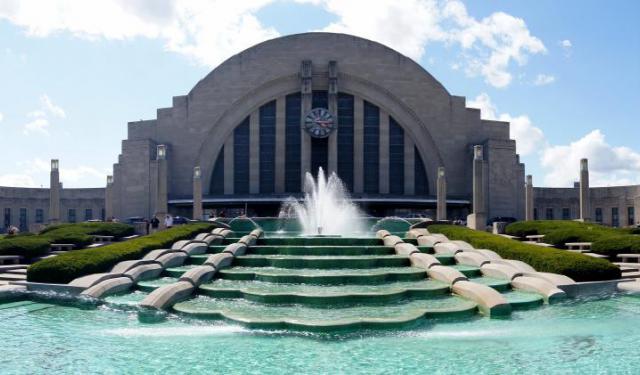 Image by wrightbrosfan on Flickr under Creative Commons License.

Museums and Galleries (Self Guided), Cincinnati

The museums of Cincinnati are among the best in the region. You can even visit four museums in one at the Cincinnati Museum Center located at Union Terminal. Take this tour to explore Cincinnati's valuable historic and modern treasures.
How it works: Download the app "GPSmyCity: Walks in 1K+ Cities" from iTunes App Store or Google Play to your mobile phone or tablet. The app turns your mobile device into a personal tour guide and its built-in GPS navigation functions guide you from one tour stop to next. The app works offline, so no data plan is needed when traveling abroad.

The Cincinnati Reds Hall of Fame and Museum is dedicated to the career of former Cincinnati Reds players, managers and front-office executives. You can learn about the history of the team from the beginning to present achievements and see unique objects, such as World Series trophies (from 1975, 1976 and 1990).
Image by Rdikeman on Wikimedia under Creative Commons License.
4

The CAC is a ground-breaking contemporary art museum. It was opened in 1939, being located in a six-story building, a fascinating artwork by itself. The center is well-known for thought-provoking and original works, and for focusing on new developments in sculpture, photography, architecture, and new media. It displays "the art of the last five minutes", promoting artists in their early careers.

ArtWorks Gallery is a non-profit gallery founded in October 2003 in downtown Cincinnati. The mission of ArtWorks is to unite artists of all ages and to give them the opportunity to exhibit their work and to develop their careers. The gallery organizes 8-10 exhibitions annually.

The Cincinnati Museum Center at Union Terminal, originally Cincinnati Union Terminal, is a passenger railroad station in the Queensgate neighborhood of Cincinnati. After the decline of railroad travel, the building was converted to serve other purposes, and it now houses museums, theaters, and a library. The principal architects of the massive building were Alfred T. Fellheimer and Steward Wagner, with architects Paul Philippe Cret and Roland Wank brought in as design consultants. Cincinnati was a major center of railroad traffic in the late 19th and early 20th centuries, especially as an interchange point between railroads serving the Northeastern and Midwestern states. The museum center opened in 1990 and houses six institutions: the Cincinnati History Museum, the Museum of Natural History & Science, the Robert D. Lindner Family Omnimax Theater, the Cincinnati Historical Society Library, the Duke Energy Children's Museum, and the Cincinnati Railroad Club.

Operation hours: Monday - Sunday: 10:00 am - 5:00 pm.
Image by Canadacow on Wikimedia under Creative Commons License.
Sight description based on wikipedia
8

The John Hauck House Museum is an Italianate mansion located on Dayton Street. The Hauck House has a striking facade of carved stone, and the spacious rooms have intricately painted ceilings, floors of parquet wood, marble mantels, and elaborate woodwork. John Hauck was a German immigrant who rose to prominence in the area as one of Cincinnati’s famous brewers. The museum was established to promote an understanding of daily life and customs in late 19th-century urban Cincinnati through the preservation and interpretation of the Hauck House. The museum is open by appointment only.
Image by dave menninger on Wikimedia under Creative Commons License.
Sight description based on wikipedia