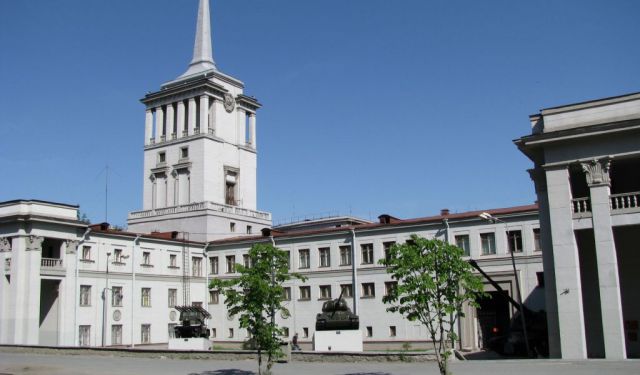 Image by Falshivomonetchik on Wikimedia under Creative Commons License.

Museums and Galleries (Self Guided), Yekaterinburg

Yekaterinburg, the capital of the Urals, is home to numerous museums that focus on a variety of subjects, including folk art, natural history, photography, military history and more. This walking tour will guide you to the most notable museums in the city where you will learn why Yekaterinburg is known as the cultural center of the Urals.
How it works: Download the app "GPSmyCity: Walks in 1K+ Cities" from iTunes App Store or Google Play to your mobile phone or tablet. The app turns your mobile device into a personal tour guide and its built-in GPS navigation functions guide you from one tour stop to next. The app works offline, so no data plan is needed when traveling abroad.

The Sverdlovsk Art Gallery was founded in 1936 and was later renamed the Sverdlovsk Fine Arts Museum. In 1992, when the city returned to its historic name, it was renamed the Yekaterinburg Fine Arts Museum. The Ural Society of Naturalists provided the core of the museum's collection, and items were later added from the State Hermitage, the Tretyakov Gallery and the Pushkin Museum. The museum is known for its unique collection of Kashlinski art moldings and the world famous Kashlinski Iron-cast Pavilion, which received the Grand Prix award at the Paris Expo in 1900. Over the years the museum has grown into a major cultural center in Yekaterinburg.

Image by const_st on Wikimedia under Creative Commons License.
2

The Natural History Museum has approximately 60,000 items in its collection. The most famous pieces in the paleontology collection are the skeleton of a giant deer (found in 1886 in the Kamyshlovskoye district), the skeleton of a mammoth (found in 1897 in the Talitskii region) and the fossil of a Helicoprion shark's spiral tooth (found in 1900 in the Krasnoufimsk district). The museum's displays include dioramas made by Saratov artists. In May 2008, the museum added a new section that features unusual paintings by Franz Frantsevich Schillinger, a native of Austria.

Image by Prokudin-Gorsky on Wikimedia under Creative Commons License.
3

Gamayun, Yekaterinburg's Museum of Folk Art, was founded on March 25, 1994. The museum features a selection of pieces made by amateur artists, whose work is becoming increasingly popular worldwide. Many of the pieces on display are made from wood or ceramic, and every piece reflects the unique perspective of its Russian creator.

Ural-Poster opened in 1997 and features the work of Yekaterinburg artists. Many of the pieces in the gallery were created by established artists. Here you can find paintings from the poetic realism period of the late 19th and the early 20th centuries, as well as work from the Soviet period. Although a commercial enterprise, the gallery also serves as a significant cultural center for the community. Here you can express your ideas and listen to the opinions of famous artists, as well as purchase some fine art to take home.

The State Stone Cutting and Jewelers Art History Museum was founded in 1992. It is located in the city center on the former site of the Mining Drugstore, which is now preserved elsewhere as an important example of national architecture. The museum was designed by renowned Ural architect Michel Malakhov in 1821. The incredible mineralogical riches of the Urals have attracted the attention of local stone cutters for centuries. The earliest stone cutting tools in the museum date back to the 18th century. Multiple halls showcase the modern art of stone cutting, which continues to preserve the traditions of the past.

The Yekaterinburg History Museum was founded in 1992 through the reorganization of the House of Sverdlov, which has been around since 1940. The museum is located in a structure that was built in 1820 by Postmaster G. Layvashevsky. In 1837 an additional wing was added by mining engineer A. G. Kachka. Over the years it has served as a hotel, a nobleman's mansion and an apartment house. In the late 19th and early 20th centuries, the building housed the famous private library of S. A. Tichotsky. From 2004 to 2005, the building was renovated and greatly expanded. In an interactive exhibit at the museum, you can stroll through the streets of old Yekaterinburg, view the city from outer space, and descend underground to discover the wealth of mineral resources hidden there.

Metenkov's House is the former home of photographer Benjamin Leont'evich Metenkov, which was transformed into a museum in 1998. This beautiful, historic mansion now hosts a variety of exhibitions that focus on the work of Russian photographers. The house is managed by the History Museum of Yekaterinburg.

The United Museum of Ural Writers is one of the largest literary museums in Russia. It opened in 1980, and in 1993 the museum acquired the status of municipal cultural institution. The main function of the museum is the collection, preservation and study of literature related to the Urals. In 2005 the museum began to publish its own periodical named the “Literary Quarter”, which now appears in magazine format.

The Military History Museum was founded in 1959 in the heart of Yekaterinburg. Originally, it was a civic museum run by the Officer's House. Today the museum's exhibits depict the tragedy and heroism of the Great Patriotic War period (1941 – 1945). Their main theme is the contribution of the Ural region to victory in the war. The most notable piece at the museum is a copy of the sculpture dedicated to the soldiers of the Ural 10th Guard, the Lviv voluntary tank corps. A new exhibit that showcases part of a military commander's room is particularly interesting. Another notable exhibit, which attracts tourists, locals and foreign delegations visiting the city, is a relic of the Cold War era, an American spy plane. This Lockheed U-2, piloted by the American Francis Gary Powers, was shot down by the Soviet Union military on May 1, 1960.

The B. U. Kashkin Museum opened on December 19, 2008, and is located on the ground floor of Ural State University. It was built through the joint efforts of students, staff and faculty members in order to promote cultural and artistic projects, as well as interdisciplinary research. The museum's collection includes rare artifacts and archival material related to B. U. Kashkin, a creative eccentric from Siberia.

Operation hours: Wednesday: 12 pm - 6 pm. Other days only by appointment
Image by Vladimir Holostyh on Wikimedia under Creative Commons License.
11

The Yekaterinburg Gallery of Modern Art is a unique museum and exhibition complex located in the historic center of Yekaterinburg. The gallery was established in 2003 with the purpose of preserving some of the best work by Urals artists. To date, the collection boasts over 850 paintings, drawings and sculptures. Its pieces chart the evolution of the Urals school of art from the 19th century until today. The permanent exhibition galleries are updated on a regular basis. Since opening in November 2004, the gallery has organized and curated over 70 exhibitions of work by Russian and international artists working in a variety of media.

The Exhibition Hall of Ekaterinburg Creative Union of Artists was founded on December 12, 1999, by internationally-known artists Misha Brusilovsky, Vitaly Volovich and Andrew Volovich. Soon after opening, the first exhibition was held featuring avant-garde classics by local artists. Almost all the pieces on display have been created by established artists, although occasionally art students are asked to exhibit some of their work. Typically, the exhibits are updated once a month.