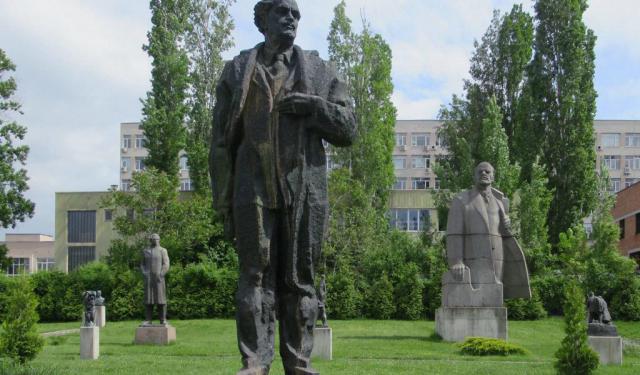 Image by JLCA on Wikimedia under Creative Commons License.

Sofia boasts a number of great museums that reflect Bulgaria's history, its cultural heritage and the way of life in the country. Take this walking tour to get a keen insight into Bulgarian history.
How it works: Download the app "GPSmyCity: Walks in 1K+ Cities" from iTunes App Store or Google Play to your mobile phone or tablet. The app turns your mobile device into a personal tour guide and its built-in GPS navigation functions guide you from one tour stop to next. The app works offline, so no data plan is needed when traveling abroad.

Rafaela Gallery has a large collection of Bulgarian Orthodox and foreign icons. The gallery was opened in 1996. The gallery is situated in downtown Sofia near the National Opera house.
Image by cod_gabriel on Flickr under Creative Commons License.
2

2) The Alexander Nevsky Crypt (must see)

The Alexander Nevsky Crypt is located inside the Alexander Nevsky Cathedral. It is said that this fascinating museum contains the largest collection of Orthodox icons in all of Europe.
Image by www.vacacionesbulgaria.com on Wikimedia under Creative Commons License.
3

Initially opened in 1892 as a section of the National Museum, the Ethnographic Museum became a separate museum in its own right in 1906. The museum is currently housed in the luxurious surroundings of the city's Royal Palace.
Image by J L C A on Wikimedia under Creative Commons License.
4

Image by Nenko Lazarov on Wikimedia under Creative Commons License.
Sight description based on wikipedia
5

The National Archaeological Museum is an archaeological museum in the centre of Sofia. It occupies the building of the largest and oldest former Ottoman mosque in the city, Büyük camii ("Grand Mosque"), built from stone around 1474 under Mehmed II. The museum was established as a separate entity in 1893 as the National Museum directed by the Czech Václav Dobruský with its headquarters in the former mosque that previously housed the National Library between 1880 and 1893.

The museum was officially opened and inaugurated in 1905, as by then all archaeological exhibits previously kept all over the city were moved there, in the presence of Knyaz Ferdinand of Bulgaria and Minister of Enlightenment Ivan Shishmanov.

Several additional halls and administrative buildings of the museum were constructed in the following years, which continues to use the historic stone building of the old mosque despite the often unfavourable conditions, notably the humidity in the summer. The museum has five exhibition halls: Central Hall, Prehistory, Middle Ages, Treasure, and a special temporary exhibition. It is managed by the Bulgarian Academy of Sciences.
Image by Ann Wuyts on Wikimedia under Creative Commons License.
Sight description based on wikipedia
6

Minerva gallery houses the works of over 50 Bulgarian artists. In this gallery you can admire paintings, works of culture and graphics. Situated inside a hotel, the gallery is open 24 hours a day seven days a week.
Image by unforth on Flickr under Creative Commons License.
7

This museum is situated in the former home of not one but two great Bulgarian writers, Petko and Pencho Slaveykov. In this house Petko created beautiful poems and folklore writings along with his son, who went on to become one of Bulgaria's most renowned poets. Pencho Slaveykov later became famous not only in his mother country but also internationally as well.
Image by Bin im Garten on Wikimedia under Creative Commons License.
8

Paris Art Gallery is a small and comfortable gallery located in the heart of Bulgarian capital near The National Opera. It was established in 2003 and displays pieces created by the young Bulgarian artists.
Hours: Mon-Fri: 11:30-18:30; Sat: 11:30-15:00.
Image by See-ming Lee 李思明 SML on Flickr under Creative Commons License.