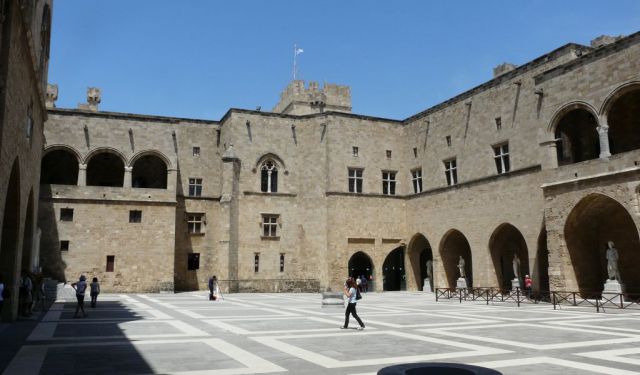 There are many interesting museums located in Rhodes. The Archaeological Museum, the Palace of the Grand Master of the Knights and the Museum of Modern Greek Arts are the most famous and are a must visit while in Rhodes. Also be sure to take note of the impressive historical buildings that house the city's museums. Take this tour to spend a few hours discovering the museums and galleries of Rhodes.
How it works: Download the app "GPSmyCity: Walks in 1K+ Cities" from iTunes App Store or Google Play to your mobile phone or tablet. The app turns your mobile device into a personal tour guide and its built-in GPS navigation functions guide you from one tour stop to next. The app works offline, so no data plan is needed when traveling abroad.

In addition to the opulent textiles that you find adorning the walls of the museum, there are fascinating ceramics, documents, coins, sculptures, crosses and jewelry inlaid with precious gems on display. The museum is open between 9am and 5pm Tuesday to Sunday. Exploring the Byzantine Museum is an excellent way to learn more about this fascinating era and its artworks not only on Rhodes, but within the region in general.

Image by Radu Barla on Wikimedia under Creative Commons License.
2

2) Archaeological Museum of Rhodes (must see)

The Archaeological Museum of Rhodes is located within the Old City in one of the buildings formerly occupied by the Knights Hospitaller. The building dates from 1440, when it was constructed by the Grand Master D’Aubusson. Rhodes has a long and fascinating history that stretches all the way back to classical times when the Colossus of Rhodes greeted visitors to the city. Here at the Archaeological Museum of Rhodes you will find many of the ancient artifacts that have been uncovered during excavations on the island.

One of the best known items from the museum’s collection is an amphora of Fikellura style dating from the 6th century B.C and featuring depictions of animals below the handles. An attic amphora shows the departure of a warrior, which reflects the constant conflicts of the period around the 6th century B.C. A grave stele of Krito and Timarista that has been dated to between 420 and 410 B.C shows two female figures wearing traditional clothing and embracing. A stone head of the god Helios, provides interesting information about Rhodes’ Hellenistic period. There are several rooms in the museum that are dedicated to specific sites on the island and feature fine statues and mosaics.

Image by Jorge Láscar on Wikimedia under Creative Commons License.
3

The Palace of the Grand Master of the Knights of Rhodes is a palace that was built in the 14th century by the Knights of Rhodes, who occupied Rhodes from 1309 to 1522. After the island was captured by the Ottoman Empire, the palace was used as a fortress. The original palace was largely destroyed by an ammunition explosion in 1856. When the Kingdom of Italy occupied Rhodes in 1912, the Italians rebuilt the palace in a grandiose pseudo-medieval style as a holiday residence for Victor Emmanuel III of Italy and later for Benito Mussolini, whose name can still be seen on a large plaque near the entrance. On February 10, 1947, the Treaty of Peace with Italy, one of the Paris Peace Treaties, determined that the recently-established Italian Republic would transfer the Dodecanese to the Kingdom of Greece. In 1948, Rhodes and the rest of the Dodecanese were transferred as previously agreed. The Greeks converted the palace to a museum.
Image by Adam Carr on Wikimedia under Creative Commons License.
Sight description based on wikipedia
4

The Center of Modern Art is located on Socratous Street and is a part of Museum of Modern Greek Art. The center's mission is to organize art exhibitions, mostly of work by young artists from all over Greece. It showcases a variety of pieces, including paintings, sculptures, digital art, photography and more.
Image by Ioannis Altamouras on Wikimedia under Creative Commons License.
5

5) Jewish Museum of Rhodes (must see)

The Jewish Museum is adjacent to the Kahal Shalom Synagogue in Rhodes. It was opened by Aron Hasson in 1997. It displays various items such as costumes and family photos that help paint a picture of Jewish history and culture in Rhodes. The museum's archives contain such unique artifacts as a silver “Kucharera,” a “talit” bag, a 1925 medal of honor and more.