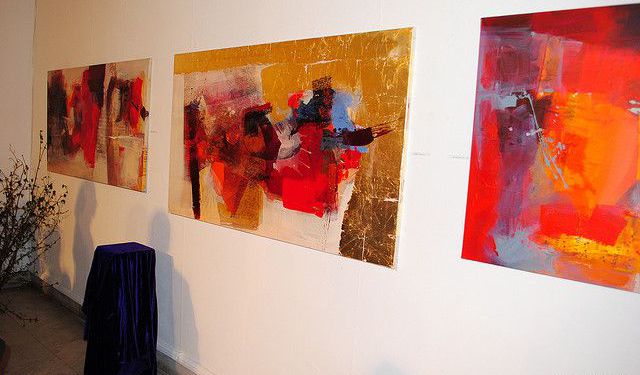 Image by ataraxis on Flickr under Creative Commons License.

Home to amazing museums and galleries, Timisoara is the largest city in western Romania. Its greatness comes as a result of cultural interaction, which influenced the country in the past. It comprises local and foreign paintings, archaeological findings, war items and documentation, which left a painful mark on the lives of the survivors. Take this tour and live the emotions which culminated during the World Wars and the Revolution as of 1989.
How it works: Download the app "GPSmyCity: Walks in 1K+ Cities" from iTunes App Store or Google Play to your mobile phone or tablet. The app turns your mobile device into a personal tour guide and its built-in GPS navigation functions guide you from one tour stop to next. The app works offline, so no data plan is needed when traveling abroad.

1) Memorial Museum of the 1989 Revolution

Memorial Museum of the 1989 Revolution is dedicated to the event, which represented the fall of the communist system. Military and militia uniforms from those times are exhibited in special rooms, as well as testimonies of those who witnessed the Revolution, personal and official documents and collections of newspapers; all of these offer a full insight into the Revolution in Timisoara. The entrance is free, but there is an honesty box, so one can leave a donation.

Image by CristianChirita on Wikimedia under Creative Commons License.
2

If you are interested in religious art, the city of Timisoara has a great offer for you. The Serbian Bishops' Collection, which is located in Piata Unirii, displays a collection of portraits and outstanding icons dating back to the eighteenth century.
Image by Voytek S on Wikimedia under Creative Commons License.
3

The history of the art collection begins with the Banat Museum’s establishment in 1872. To the humble beginnings of the actual section of art, dating back to 1879 when the first painting was registered, is added an important donation from Ormòs Zsigmond’s collection, who was one of the museum’s founders, in the period between 1888 and 1895. His donation, which included Italian, Dutch, German, Austrian, Hungarian and Romanian paintings, formed the nucleus of the Timisorean museum. In 1979, the Art Section of the Museum had a collection of 7000 pieces, which from 1987 continued to evolve under a new roof in the west wing of the Baroc Palace, located in Piata Unirii. Since 2006, the Art Section is an independent museum.

Image by uzo19 on Wikimedia under Creative Commons License.
4

The Military Museum operates in the historic monument building, the Military Casino, and it is organized in six sections: “Decebal”, “Early Middle Ages”, “Middle Ages”, “Mihai Viteazul”, “The Union of the Romanian Principalities and the World Wars” and the section called “Weapons and military uniforms Chamber”. The Museum’s patrimony represents a collection of over 2000 pieces: maps, documents and models of historical monuments and photographs.
Image by gabriella szekely on Flickr under Creative Commons License.
5

The Contemporary Art Center, Calina Gallery was inaugurated in February, 2007. The Gallery aims to exhibit local contemporary artists as well as foreign ones and to encourage young talents. The exhibitions are filled with catalogs, movies, flyers and postcards about the artists and their work.
Image by Calina Gallery under Creative Commons License.
6

The Museum of Banat is a museum headquartered in Hunyad Castle. It was founded in 1872 under the name "Societatea de Istorie și Arheologie" (The Society for History and Archaeology). It hosts the largest collection of archaeological objects Banat. The ground floor houses the Neolithic sanctuary from Parța, a unique monument in Europe.

The museum includes departments for history, archaeology, ethnography and natural sciences. It also has a laboratory for conservation and preservation of objects of cultural heritage and history.

The museum is located in a historic monument building. The permanent exhibition presents archaeological material on the Neolithic, Daco-Roman periods and the Middle Ages. The museum owns goods listed in the National Cultural Heritage Treasure.

Image by Radufan on Wikimedia under Creative Commons License.
Sight description based on wikipedia
7

If one is looking for contemporary art in Timisoara, there are numerous galleries to be checked. Helios Gallery is not just an art gallery, but also an exhibition salon; special events on an international level are held here. One can visit the gallery from Monday until Friday and on Saturdays too.