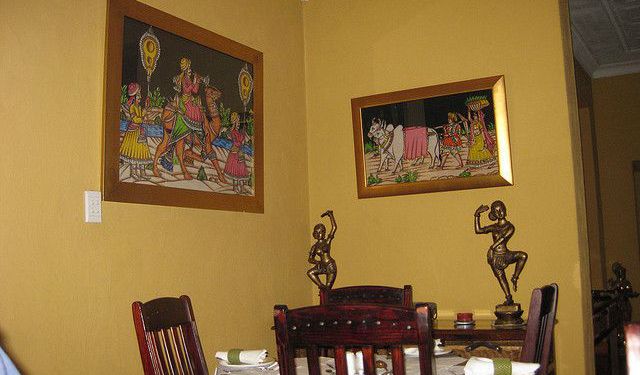 Image by Jeppestown on Flickr under Creative Commons License.

Johannesburg is known as an important and rich South African city. There are a lot of museums and mines providing information on the methods of gathering gold and other precious metals. It is also an important cultural city with museums and galleries presenting the history of Johannesburg’s formation. Take the following tour to discover its best known and most beautiful galleries.
How it works: Download the app "GPSmyCity: Walks in 1K+ Cities" from iTunes App Store or Google Play to your mobile phone or tablet. The app turns your mobile device into a personal tour guide and its built-in GPS navigation functions guide you from one tour stop to next. The app works offline, so no data plan is needed when traveling abroad.

Everard Read Gallery is another famous gallery that houses exhibitions of modern local and foreign artists. Their exhibitions contain paintings and sculptures of well-known artists such as Lewis, Sebidi and Serfontain. Operation Hours: Monday - Friday: 9am - 6pm; Saturday: 9am - 1pm.
Image by Joe Haupt on Flickr under Creative Commons License.
3

Goodman Gallery displays established and contemporary African and international art that is Africa-themed. Exhibitions are held once a month and worth checking out. Operation Hours: Tuesday - Friday: 9.30 - 17.30; Saturday: 9.30 - 16.00.
Image by Peter Rivera on Flickr under Creative Commons License.
4

Why You Should Visit:
Loads of vintage airplanes, cannons, guns, swords, tanks – any boy's idea of a great day out.
This is a place that allows you to touch and see up close – even stick your head in to check what's inside!

Tip:
Take your own refreshments and snacks to sit on the grass area, or see if the café is open.

Opening Hours:
Daily: 9am-4:30pm (excluding Good Friday, Christmas Day and the first Sunday in September when the Jazz on the Lake concert is held at Zoo Lake)


Image by NJR ZA on Wikimedia under Creative Commons License.
Sight description based on wikipedia
5

Adler Museum of Medicine exhibits the history of medicine in Johannesburg. There is a collection of pictures, instruments and books relating its entire history, including information on traditional and non-traditional methods. Operation Hours: Monday - Friday: 09:00 - 16:00; Saturdays on request.
Image by Laura Bernhardt on Flickr under Creative Commons License.