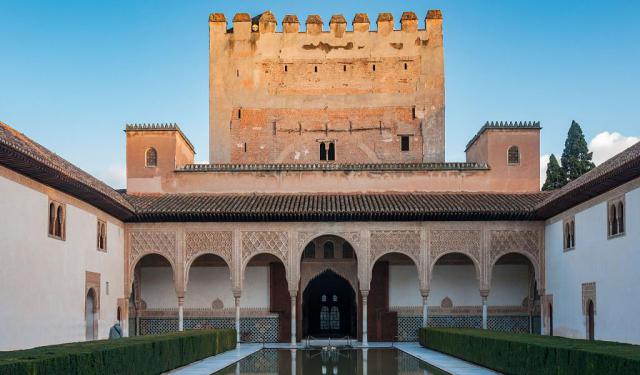 Image by Uwe Aranas on Wikimedia under Creative Commons License.

If you want to get to know Granada, this is the tour you have to take. It gives you the chance to learn about the city's culture and history -- from the Nasrid Empire to the Christian conquest; much as to be delighted by its architectural wonders. At the end of the tour, you can enjoy the city panorama from one of its Miradores.
How it works: Download the app "GPSmyCity: Walks in 1K+ Cities" from iTunes App Store or Google Play to your mobile phone or tablet. The app turns your mobile device into a personal tour guide and its built-in GPS navigation functions guide you from one tour stop to next. The app works offline, so no data plan is needed when traveling abroad.

Editor's note: The museum is temporarily closed for renovation.

The Archaeological Museum is housed in the House of Castril, a villa built by heirs of the Catholic Kings in 1539. Its elegant façade was designed by Sebastian de Alcantara. In 1917, the House of Castril was acquired by Leopoldo Eguilaz y Yanguas. A keen Orientalist, Yanguas turned the palace into a museum of archaeology for the city, to better preserve Granada’s long history, and the Eastern influences that shaped it. The house has two floors, with a colonnaded courtyard at the centre, all of which is occupied by the museum. There are seven galleries in total covering a number of different archaeological eras. Visitors first pass through a gallery on the Palaeolithic period, with many exhibits on the evolution of prehistoric man. The second and third galleries demonstrate the progress of man up to the Bronze Age.

The museum’s second section, comprised of four galleries, present artefacts from different ages of the modern colonial era, including many exhibits from Roman and Arabic culture. Items on display include weapons, vases, urns and pottery. The later sections demonstrate the many different cultures which have lived in Granada throughout the city’s long history. The museum generally focuses on local archaeological finds, though exhibits from around the world are included. Admission is free to EU citizens, and costs 1.50 Euros for others. It is worth noting that the museum stays open through the afternoon, when many churches and museums in the city close for the traditional siesta period.

Image by a rancid amoeba on Flickr under Creative Commons License.
2

2) The House of the Pisas

The House of the Pisas was once the home of the Pisa family, a wealthy local dynasty who built this grand residential villa. It is now a museum, known as ‘Museo de los Pisa Granada’. Its main theme is the revival of Christianity in the city, which led to the construction of many spectacular churches, monasteries and other places of worship. There is an impressive collection of religious art work and iconography that demonstrates the elaborate Spanish style.

The museum also focuses on the life and work of Juan Duarte, known throughout the city as San Juan de Dios. An impoverished monk who arrived in Granada to help the poor and needy, he has a church and hospital named after him in the city, and is one of the great local folk heroes. The Pisa family, amongst many wealthy local groups, freely donated money to his cause. Juan Duarte even lived at the property for some years, and the house became a place of pilgrimage after he was canonized.

There is a chapel contained within the house where San Juan de Dios is believed to have died. A serene, historic attraction, the house and chapel give a great insight into the religious history of the city.

Casa de los Tiros is an ancient fortress built by the Christian conquerors of Granada, and was in use in the sixteenth century, forming the heart of a neighbourhood of alms houses. As peace descending on this often volatile region, it fell out of use and is now owned by the government. For many years, it has served as the town’s main library. The exterior is notable for its tower topped with battlements. The tower still contains muskets and shots, which give the house its name – ‘tiros’ is Spanish for shots.

Inside the building, the main attraction is the Cuadra Dorada, a room with swords carved into the ceiling beams. Beneath the beams stand columns, and between each set of columns you can see a bust of a Spanish king or hero, complete with details of their historic achievements. The library also contains a museum that celebrates the traditional arts and crafts of Granada, from Moorish wood craft to religious artworks. The library and museum are free for EU citizens, but cost 1.50 Euros for visitors from outside the EU.

The Fundación Rodriguez Acosta is housed in a medieval building on Callejon Nino del Royo. It houses a collection belonging to the charity of the same name. The foundation was set up in tribute to Jose Maria Rodriguez Acosta. Acosta was a local painter, born in 1878, who achieved worldwide success for his art works, most notably still life paintings. The museum is both a tribute to his work, and an impressive collection of artworks and artefacts from around the world. Some of the items contained in the museum include Palomino frescoes, religious carvings and paintings from Bocanegra.

The Foundation continues to work to improve the current collection, and to offer support and funding to local artists. It was because of funding and family support that Acosta was able to devote his life to painting, and the Foundation aims to offer the same opportunities to the citizens of a creative city. The museum is well connected, just 100 metres from the Carmen of the Martyrs minibus stop.

Manuel de Falla was a Spanish musician and composer, one of many celebrated figures to have lived and worked in Granada. He lived at his house in the city, at Carmen del Ave Maria, close to the Alhambra, for twenty years, having been born and raised in nearby Cadiz. The house is now a museum dedicated to de Falla, which still houses many of his personal effects, and has been preserved in the condition that the great composer left it.

De Falla is believed to have composed many of his masterpieces in the house. He was said to be inspired by the landscape and historical feel of Granada. The house was left with many belongings when the musician set sail for Argentina, a South American former Spanish colony, in 1946. It is believed that the continuing civil war and strife between autonomous regions had led him to seek a more tranquil life abroad. The number of belongings left behind suggests that he was planning to return, however he passed away in Argentina less than a year later.

Guided tours of the artist’s rooms, flower garden and vegetable garden are available. Admission for adults is 3 Euros. Seniors and students can visit for 2 Euros.

The Museum of Fine Arts is housed within the Palace of Charles V, a colossal Mannerist style palace built for the Emperor who ruled the city, following the Conquest of Granada. The prominent art museum in the city of Granada, it is believed to house around 2000 paintings and sculptures. In addition, the museum’s library offers a number of texts on Renaissance and Baroque art history. These eras dominate the museum’s extensive collection, with many exceptional paintings from the 16th century on display, including works by Alonso Cano and Machuca.

The highlight of the museum collection is a sculpture depicting the Burial of Christ, by Jacopo Florentino, an artist renowned for his religious artworks, which can be seen in many of Granada’s churches. It forms the centre piece of an impressive collection of religious art, relics and artefacts – fitting for a city with such a wealth of ecclesiastical art and architecture. Admission costs 1.5 Euros, unless you are a student, senior or EU citizen.

The Alhambra is a UNESCO world heritage building, and perhaps the best preserved building for the Moorish era, when Muslim Emirs ruled large swathes of Southern Spain. Formally known as ‘Calat Alhambra’, meaning red fortress, the complex houses a palace, a mosque, gardens and streams, contained within a fortified outer wall. The palace was built in the 14th century, as the Reconquest took hold of Andalucía. The Alhambra was one of the last Moorish buildings to be constructed, before the Emirate of Granada was captured by Christian soldiers in 1492.

Seen from the Mirador of San Nicolas in Granada’s city center, the Alhambra to the south east has been said to resemble a ‘pearl in a sea of emeralds’. Formed from dusky pink stone, it rises out of a wood that was planted in the 18th century. The grounds around the building had previously contained parkland, waterfalls and fruit trees. The Emirs of the Nasrid dynasty, who built the palace and grounds, wanted to create a walled paradise.

Much of the original architecture inside the palace was damaged during raids and later redevelopment. The palace lay derelict for many years before being rediscovered and restored. Now returned to its appearance during the last days of Moorish rule, the Alhambra demonstrates a unique architectural style, where Arabic and Byzantine art mixes with European artistic traditions. This style, known as Mudejar, is also seen in many of the Catholic Churches built following the Conquest of Granada.
Image by jan zeschky on Wikimedia under Creative Commons License.