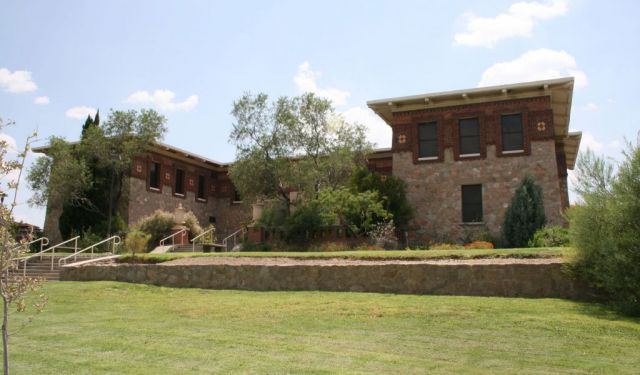 Image by old_grimm_guy on Flickr under Creative Commons License.

El Paso, the sixth largest city in Texas, is proud to present its treasures: the rich and entertaining museums, most of which are located in downtown. Quite a number of these museums focus on revealing information about the past of the Mexican and Southwest regions. You will find their exhibits fascinating, entertaining and even educational. Take the following walking tour and find out more about El Paso, its traditions and history.
How it works: Download the app "GPSmyCity: Walks in 1K+ Cities" from iTunes App Store or Google Play to your mobile phone or tablet. The app turns your mobile device into a personal tour guide and its built-in GPS navigation functions guide you from one tour stop to next. The app works offline, so no data plan is needed when traveling abroad.

Magoffin Home is located in El Paso. It was placed on the National Register of Historic Places in 1971. The surrounding area was declared the Magoffin Historic District on February 19, 1985. The home is now known as the Magoffin Home State Historic Site. The Magoffin Home, built in 1875, is a combination of the local adobe style combined with Greek revival details and is an example of the Territorial style. The thick adobe walls keep the house cool in the summer heat and warm in the winter. The house consists of three wings, each built at a different time, the last being built in the 1880s as the center that connected the two previous wings. There are 19 rooms, 8 fireplaces, and 14-foot (4.3 m) ceilings. Members of the family lived in it for 110 years, and many of the original furnishings are still displayed, including a 13-foot-tall (4.0 m) half-canopy bed.

Built by pioneer Joseph Magoffin, he lived there with his wife, Octavia (MacGreal) until their deaths. Their daughter, Josephine, who had married William Jefferson Glasgow, a future Brigadier General in an extravaganza newspapers hailed as the 'wedding of the century', inherited the house. The last member of the family to live in the home was Octavia Magoffin Glasgow, Josephine's daughter, who died in 1986. Shy but friendly spirits reportedly still inhabit the home.

Image by Larry D. Moore on Wikimedia under Creative Commons License.
Sight description based on wikipedia
2

Approximately 100,000 visitors come to contemplate exquisite masterpieces displayed at the El Paso Museum of Art every year. The museum is especially renowned for its Samuel H. Kress collection, which comprises 57 pieces by famous European artists such as Vittore Crivelli, Martino di Bartolomeo and Nicolò da Voltri. There are also contemporary works on display by Mexican and Southwestern talents, colonial art, and American art from the 19th and 20th centuries. Museum hours vary. On Thursdays you can visit from 9 am to 9 pm; on Sundays from 12 pm to 5 pm; on Mondays it is closed and the rest of the week it is open from 9 am to 5 pm.
Image by Wmpearl on Wikimedia under Creative Commons License.
3

Not many cities can boast a museum exhibiting actual trains. El Paso is one of the lucky cities: it houses an impressive Railroad & Transportation Museum. Here, you will get to see the one and only Classic American steam engine, known to be the oldest in the West, dating back to the year 1857. Other exhibits that may interest you are the ones about railroads during the war time, and the ones about train stations. The museum has the following operating hours: from 11 am to 5 pm, Tuesday through Saturday, and from 1 pm to 5 pm on Sundays.
Image by _mafiozo on Flickr under Creative Commons License.
4

El Paso Museum of History opened to the public in 1974, under the title of the Cavalry Museum. It was soon given a greater scope and achieved the status of history museum. Today, the museum displays collections of shawls, fans, typewriters, among other items, with some of the items dating from the arrival of the Spanish. Within the 13,000 sq ft space, besides the many exhibit rooms, there is also a lecture area. The museum welcomes visitors from Tuesday to Saturday, from 9 am to 5:00 pm; Thursday 9 am- 9pm and on Sunday 12 pm- 5 pm. Admission is free.
Image by Zereshk on Wikimedia under Creative Commons License.
5

The El Paso Holocaust Museum and Study Center is located at 715 N. Oregon in the city and county of El Paso. The museum was founded in 1994 by Nazi Holocaust survivor Henry Kellen. It was established to educate the public about the Third Reich, the concentration camps and resistance movements during World War II. Funding for the museum is provided through donations and grants.

The museum is open from Tuesday to Friday, from 9 am to 5 pm and on Saturdays and Sundays from 1 pm to 5 pm; admission is free.

Image by Donath, Herbert on Wikimedia under Creative Commons License.
Sight description based on wikipedia
6

The Centennial Museum, which is located within the campus of the University of Texas at El Paso, is an important venue, featuring grand collections representing Mexican and Southwestern natural and cultural histories. Since the year it was established (in 1936) the museum strives to present, through its exhibits, the life of ancestors, their daily activities, plants used in cuisine and for medical reasons, every aspect of this cultural evolution in time. The museum is open from Monday to Saturday, between 10 am and 4:30 pm. Admission is free. You can also visit the Chihuahuan Desert Gardens, where are grown over 600 species of plants from the desert’s region.
Image by Henry Delgado on Flickr under Creative Commons License.

Create Your Own Walk in El Paso

Creating your own self-guided walk in El Paso is easy and fun. Choose the city attractions that you want to see and a walk route map will be created just for you. You can even set your hotel as the start point of the walk.

Every city in the world has its unique characteristics, and El Paso is no exception! It is a prosperous city with extremely beautiful architectural monuments of historical importance, fiberglass statues of ferocious alligators and brave cowboys and many other characters. You can see a different side of the city by taking the following tour to guide you through its streets.

In the warm, arid city of El Paso there is no day that will pass without some fun or excitement. The regions near the city’s downtown will show you the best places to visit that are off the beaten tourist track. Check out the following self-guided tour and take a stroll through the streets of El Paso.

In the city of El Paso, which possesses a rich Mexican cultural heritage, there are several interesting cultural venues you ought to visit. Wander through the entertaining exhibits at Lynx, visit the Mexican world of books, admire the exquisite pieces of art and enjoy the theatrical opera performances while being in El Paso. Take this self-guided tour and let your soul be filled with a piece of El...  view more

There are many places of worship in El Paso which are worthy ones visit. The churches in the city belong to various denominations and this results in different architectural styles. You will be thrilled at the sight of these gorgeous structures. Take the following self-guided tour and visit the most outstanding religious venues of El Paso.