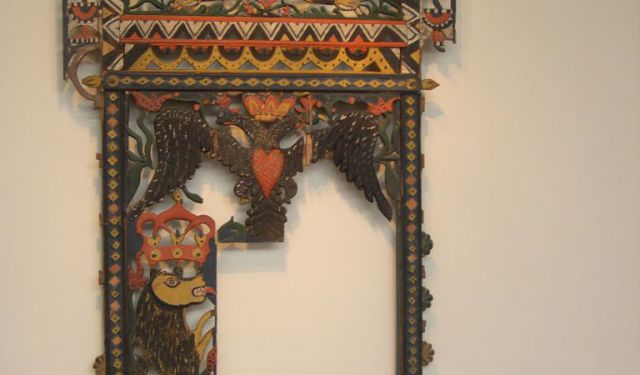 Image by upyernoz on Flickr under Creative Commons License.

Museums of Vilnius (Self Guided), Vilnius

Vilnius is recognized as a city of culture. The city offers a large number of museums that house interesting and original exhibitions. A couple of museums were set up in the palaces of former nobility. Visitors will have an opportunity to visit national exhibitions as well as appreciate works of international artists, all of which are represented in the museums throughout the city.
How it works: Download the app "GPSmyCity: Walks in 1K+ Cities" from iTunes App Store or Google Play to your mobile phone or tablet. The app turns your mobile device into a personal tour guide and its built-in GPS navigation functions guide you from one tour stop to next. The app works offline, so no data plan is needed when traveling abroad.

1) Museum of Genocide Victims (must see)

The Museum of Genocide Victims in Vilnius, Lithuania was established in 1992 by order of the Lithuanian Ministry of Culture and the President of the Union of Political Prisoners and Deportees. The museum is dedicated to collecting and exhibiting documents relating to the 50-year occupation of Lithuania by the Soviet Union, the Lithuanian resistance, and the victims of the arrests, deportations, and executions that took place during this period. The non-violent aspect of the resistance is represented by various books, underground publications, documents, and photographs. The collection pertaining to the Forest Brothers' armed resistance includes documents and photographs of the partisans. A section devoted to the victims of deportations, arrests, and executions holds photographs, documents, and personal belongings; this collection is continually expanded by donations from the public, seeing the museum as the best means of preserving the materials.

Image by Kristian Frisk on Wikimedia under Creative Commons License.
Sight description based on wikipedia
2

The Vilnius Holocaust Museum was established in 1992 by order of the Lithuanian Ministry of Culture and the President of the Lithuanian. Vilnius Holocaust Museum (also known as the Green House) attracts tourists with a modern design and multi-media presentation. The six rooms of the building are crammed with hundreds of years of Jewish history and hundreds of thousands of Jewish lives. The Holocaust Museum is a must-see attraction if you have any interest in a significant time in history. The museum is dedicated to collecting and exhibiting documents relating to the 50-year occupation of Lithuania by the Soviet Union, the Lithuanian resistance, and the victims of the arrests, deportations, and executions that took place during this period. The non-violent aspect of the resistance is represented by various books, underground publications, documents, and photographs.

Image by joannerosenthal on Flickr under Creative Commons License.
Sight description based on wikipedia
3

The Radvilos Palace was built in 17th century dedicated to Jonusas Radvila the ex voevode of Vilnius. This building was set up by the famous architect Jonas Ulrichas and was one of the most beautiful palaces in Vilnius in the 18th century. Inside, you can find a display devoted to the former owners of the palace - Radvilos family, which had a big role in city’s history. The exhibition displays 165 portraits of the noble members of the family painted by Master Hirsz Leybowicz.
Image by Juliux on Wikimedia under Creative Commons License.
4

Lithuanian Theater, Music, and Film Museum was established in 1926. In 1936, the exhibit moved to the State Theater. From 1964 to 1992, the museum was a branch of the Lithuanian Art Museum. Today, the museum is divided into several departments such as theater, music, cinema, art, and library.
Opening hours: Tuesday - Saturday: 11.00 am-6.00 pm; Sunday 10.00 am-4.00 pm.
Image by Alma Pater on Wikimedia under Creative Commons License.
5

House of M. K. Ciurlionis is a museum in Vilnius, dedicated to composer and painter Mikalojus Konstantinas Ciurlionis. The museum opened in 1995. Visitors may view the memorial room of Konstantinas who occupied the home from 1907 to 1908. Tourists may also view reproductions of his paintings.
Opening hours: Mon. – Fri. 9 am to 5 pm
Image by Alma Pater on Wikimedia under Creative Commons License.
6

The Lithuanian Art Museum was initially established in Vilnius in 1933 as the Vilnius City Museum. It houses Lithuania's largest art collection. The collections at the museum include about 2,500 paintings dated from the 16th to the 19th Century; these consist mostly of portraits of nobility and clergy of the Lithuanian Grand Duchy from the 16th to the 18th centuries, and religious works from Lithuanian churches and cloisters. Over 8,000 drawings by Italian, German, French, Flemish, Dutch, Polish, English, and Japanese artists from the 15th to the 20th century are represented. The first half of the 20th century has an extensive presence, with over 12,000 works. The collection from the second half of the 20th century features more than 21,000 exhibits. Sculpture collections span the 14th through 20th centuries, with works from a number of European countries. Other notable collections include works done in watercolor and pastel, and photography.
Image by Alma Pater on Wikimedia under Creative Commons License.
Sight description based on wikipedia
7

Vilnius Picture Gallery is located on Didzioji street in Vilnius. It's a splendid museum, which is undoubtedly worth a visit. Inside the museum, one can admire fine portraits of noblemen of the Commonwealth of Poland and Lithuania. Visitors will also find interesting sculpture and a couple of rooms stuffed with exemplary furniture. Temporary exhibitions are also displayed at the Vilinius Picture Gallery.
Opening hours: Tuesday to Saturday 11 am–6 pm; Sunday 12 am–5 pm.
Image by Alma Pater on Wikimedia under Creative Commons License.