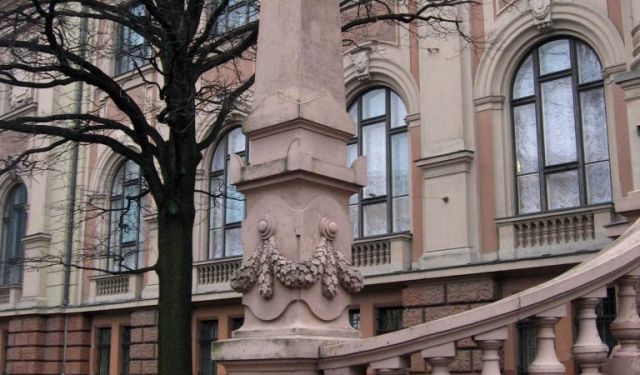 Image by Dezidor on Wikimedia under Creative Commons License.

Often the historic area of Riga gets all the attention, as some of the city's most beautiful museums and buildings are located here. This tour, however, will take you not only to Riga's well-known museums but to some of the city's more obscure, yet fascinating museums. Take this self-guided tour to fully explore Riga's fabulous array of museums.
How it works: Download the app "GPSmyCity: Walks in 1K+ Cities" from iTunes App Store or Google Play to your mobile phone or tablet. The app turns your mobile device into a personal tour guide and its built-in GPS navigation functions guide you from one tour stop to next. The app works offline, so no data plan is needed when traveling abroad.

The Museum of Fire-fighting in Riga was opened in 1978, in a former fire station. The splendid Art Nouveau building, located at Hanzas iela no 5, was designed by architect Reinhold Georg Schmeling and finished in 1911.

The museum documents the history of fire fighting in Latvia, starting from the second half of the 19th century to the present day. Spread over two levels, the museum features fire fighting equipment, vehicles, uniforms and different tools, as well as awards, distinctions for bravery and documents related to fire fighting history. The first floor is dedicated to the period from the 19th century till 1940, showing uniforms, mechanical pumps and other equipment used for putting out fires in those days. The gem of the first floor collection is the Chevrolet Six fire engine. The second floor displays uniforms, documents, awards, and pictures of fire fighters who lost their lives in the line of duty, as well as pieces of fire-fighting machinery, flags and photographs spanning from 1940 onwards. Temporary exhibits are held in the museum on a regular basis.

Apart from viewing the displays, visitors to the museum can also take part in quizzes and attend courses on fire prevention and fire fighting. Educational materials for children are available.

Image by Dainis Matisons on Flickr under Creative Commons License.
2

The Museum of Janis Rozentals and Rudolfs Blaumanis is set on the 5th floor of a beautiful, Art Nouveau-style building at 12 Alberta Street. The house was built in 1903 to a design by architects K. Pēkšēns and E. Laube. The top floor was specially conceived for Rozentals' family and contained a painting workshop where the famous artist could put his ideas on canvas. The Art Nouveau interiors perfectly accord with the epoch and many of the rooms are decorated with the items once belonged to J. Rozentals and his family. Among the displayed objects are Rozentals' paintings, portraits of his friends and relatives, as well as painting tools and household items.

The guest room in his apartment was reserved for Rudolfs Blaumanis, a Latvian poet and good friend of Rozentals', who lodged there for two years, from 1906 to 1908. The memorial room contains manuscripts and the bear skin gifted by Rozentals to Blaumanis to keep him warm during cold winter months.

The museum was opened in 1973 and on October 1st, 2009 received affiliation with the Association of Memorial Museums of Latvia.
Image by Fearless Fred on Flickr under Creative Commons License.
3

3) Pauls Stradins Museum for the History of Medicine

Pauls Stradins Museum of the History of Medicine is one of the top three medical museums in the world. It was founded in 1957 by Pauls Stradins, one of Latvia’s leading physicians, and hence bears his name. The museum is currently housed in a 19th century building, designed by Heinrich Scheel, and located at 1, Antonijas iela. The exhibits are arranged chronologically, so as to allow visitors to explore the history of the world medicine from its early days. The exposition starts in the basement, with the so-called folk medicine, featuring herbal remedies, sorcery, magic, ancient bandages and trauma treatments. Further upstairs it proceeds to the Middle Ages. This part was put together by Pauls Stradins himself and reveals medical instruments of the medieval period and curing practice in much detail. The 18th-19th century section is by far one of the most dramatic in the museum. It tells about smallpox vaccine, X-ray discovery, tuberculosis treatment, as well as the first surgeries performed in Latvia. The final section is dedicated to the country's modern medicine, highlighting the variety of medical experiments undertaken in Latvia, famous local spas, and contains the consulting room of Professor Pauls Stradins. Among the most peculiar items on display are a dog with two heads, a body of a female infected with smallpox, an extensive collection of pharmacy containers, a dog cosmonaut, and several exhibits related to spatial medicine.

The Museum of Romans Suta and Aleksandra Belcova is a small memorial museum which tells the story of Latvia's famous artistic couple. Located in the apartment no.26 at 57 Elizabetes iela, that was once occupied by the artists, the museum highlights their professional achievements, social activities and family life.

Romans Suta (1896-1944) was an artist of multilateral talent, which fully revealed itself in visual arts as well as essay writing. The museum features film sets, costumes, book illustrations and paintings by Suta, as well as some of the essays he wrote.

Aleksandra Belcova (Suta’s wife) was an elegant and modern woman, and with a great deal of artistic talent herself. Her paintings, influenced by Cubism and Constructivism, as well as sketches, adorn the museum’s walls. Photographs, letters, documents and household items are also on display, along with the original furniture that belonged to the couple and recreates the original home atmosphere.

A special place in the museum is devoted to the Baltars porcelain painting workshop, founded by Romans Suta. Presented here are pieces of china, hand-painted by Suta and Belcova, pleasing the eye with their vibrant colours and masterly execution.

Krisjanis Barons (1835-1923) was a well-known Latvian folklorist, who pioneered collecting and publishing dainas, - traditional four-verse folk poems, - and whose image is currently featured on a 100 Latu (local currency) note. In the course of his life, Barons had gathered over one million dainas, travelling from house to house across the nation. Each poem he had found was written on a piece of paper and then placed in a separate drawer. Afterwards, the poems were published in voluminous editions in an attempt to popularize them nationwide and, thus, pass on to the future generations.

The museum is located on eponymous Barona iela (Barons street) in Riga, in the apartment previously occupied by Barons himself. The premise conveys the turn of the century atmosphere courtesy of the original furniture, old photographs, manuscripts and household items carefully preserved and displayed in the museum, virtually transporting visitors back to the 1920s. Captured on the pictures, hanging on the walls, are friends, family and places associated with Barons. Exhibit descriptions are available in Latvian and English.

The Museum of Nature in Riga boasts the oldest and most voluminous collection of natural exhibits in the Baltic region. The museum was founded as a private entity in 1845 by the Riga Naturalists Society, which was a German society aimed at preserving and displaying its natural collection to the people for the purpose of educating and involving them in environmental issues. This goal has stayed unchanged throughout the museum’s history and its new exhibits, added over the years, pursue the same objective.

The museum collections are spread over four levels, featuring a multitude of fossils, stuffed animals and plants. Those seeking zoological and geographical information about the region will find it here in abundance. The 175,000 exhibits are grouped into 6 categories, namely: Geology, Botany, Zoology & Entomology, Palaeontology & People, Anthropology, and Environment. Temporary exhibits are also periodically displayed in the museum.

Apart from the exhibition space, the museum embraces departments for Collection Management, Exhibition and Information, taxidermy and photographic laboratories and a library.