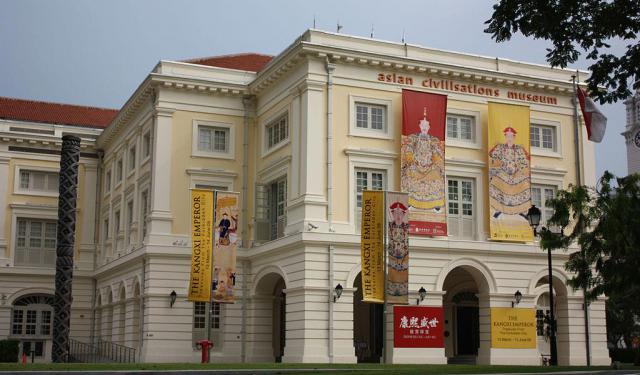 Image by Wolfgang Holzem on Wikimedia under Creative Commons License.

Singapore's crazy population mix means that there are museums dedicated to the culture of each community that makes up the multi-ethnic, multi-cultural nature of this island state. This self-guided tour will take you through museums that display the Asian way of life, art and religion.
How it works: Download the app "GPSmyCity: Walks in 1K+ Cities" from iTunes App Store or Google Play to your mobile phone or tablet. The app turns your mobile device into a personal tour guide and its built-in GPS navigation functions guide you from one tour stop to next. The app works offline, so no data plan is needed when traveling abroad.


Image by Ryan Custodio on Flickr under Creative Commons License.
2

Located within three beautifully-restored shophouses on Pagoda Street, the Chinatown Heritage Centre tells the stories of Singapore’s past.

The center really gives you an insight into the life of the Straits Chinese who came to Singapore, living in the shophouses and carry on their trade in a single room shared with all their family members. The recreations of the various trades plied by this hardworking community - tailor, shoemaker, dressmaker, doctor etc. - together with the communal kitchen and toilet areas is a real eye opener into their living conditions in the 1950s.

The audio guide explains who lived behind the shop front and house, and how the tailor, apprentices and his family worked and lived together as well as the coolies and Samsui women in the floors above.

In addition to its exhibits, the Chinatown Heritage Centre holds various workshops and story-telling sessions for visitors who want to learn about the Chinatown history. Those looking to bring home a memento can find a range of books, postcards and prints by local artists.
Image by Sengkang on Wikimedia under Creative Commons License.
3

The robust former Empress Place Building, located at the mouth of the Singapore River, is one of the city's architectural treasures – elegantly proportioned and symmetrically laid out, adorned with many decorative features, such as exquisite plaster mouldings, architraves, and cornices. Completed in 1867 and named after Queen Victoria, it still wears the original Neoclassical Palladian exterior, despite having undergone a series of renovations and extensions, featuring same Roman Doric facade for the principal storey with pitched clay tile roofs, arcaded verandahs and timber-louvered French windows that used to keep the interior cool and well ventilated in Singapore’s tropical climate before air-conditioners were installed and which caught the attention of many migrants sailing into Singapore harbor over the years.

Today, this white two-storey edifice houses the Asian Civilisations Museum that ambitiously tries to pull together the various threads of Asian civilizations, from the Middle East to China, thus helping to better understand and appreciate all the different cultures that went into making Singaporeans what they are – a cosmopolitan nation.

Informative and well-presented, with special exhibits not often seen in public, this museum has a few highlights worth mentioning, starting with the Hindu-Buddhist gallery and its beautifully-lit displays featuring a stunning 18th-century Burmese Buddha head and a large bronze drum. The Chinese influences are also well represented, from tomb remains to ceramics over a thousand years old that have been recovered from a shipwreck found in 1998. All in all, the recovered cargo comprises more than 60,000 well-preserved pieces, including gold and silver items produced in China during the Tang dynasty. In the small Malay World section, look out for a spectacular Kelantan Makara, a huge goggle-eyed mongrel creature once used in rituals, while elsewhere you will find exquisite examples of porcelain, textiles, lacquerware, costumes and traditional huge procession statues.

The museum also has a restaurant, called “Empress”, serving traditional Chinese cuisine in a contemporary waterfront setting, plus a cafe, called “Privé ACM”, where you can relax at the alfresco area, enjoying view of the Singapore River and the city's business district skyline. The museum shop carries souvenirs and a wide range of books on Asian art.

Tip:
You can take one of the free English tours which are very worthwhile, usually beginning in June and running at 11:30am, 1:30pm, and 3pm most days; and if you plan to go to more than one museum, consider getting a multi-museum pass while you're here.

Editor's Note: The museum is closed for redevelopment until 1st of December 2020.

The Singapore Philatelic Museum deals with post offices in Singapore and with stamps. It is for those interested in rare stamps. It gives some information about Singapore's history and its philatelic heritage. There are permanent and temporary exhibitions. Also there is a shop where you can buy stamps.

Editor's Note: The museum is temporarily closed for revamp.

Peranakan Museum in Singapore is the first museum dedicated to Peranakans in the world. Peranakans are descendants of Chinese immigrants of the late 15th and early 16th centuries who moved to Nusantara, Malaya, Java and some other places. There are ten permanent galleries that display Peranakan culture, their way of life and their traditions. Do not miss the Peranakan Wedding Bed. Mrs. Quah Hong Chiam of Penang delivered the first seven of her 11 babies on this very bed.
Image by Jnzl's Photos on Flickr under Creative Commons License.
Sight description based on wikipedia
6

6) National Museum of Singapore (must see)

The National Museum of Singapore is the oldest museum in the city. It displays collections related to the history of the city and the archaeological values of Singapore and Asia. The museum's building is designed in the Neo-Palladian and Renaissance styles. There is a glass rotunda.

Its most precious artefacts are the Singapore Stone, the Gold Ornaments of the Sacred Hill from East Java, Daguerreotype of Singapore Town which was one of the earliest photographs of Singapore, the will of Munshi Abdullah, the portrait of Frank Athelstane Swettenham, the hearse of Tan Jiak Kim, a Peranakan coffin cover, the mace of the City of Singapore commemorating King George VI's raising of the island's status to a city in 1951, the Xin Sai Le puppet stage, William Farquhar's drawings of flora and fauna and the portrait of Shenton Thomas, who was the former governor of Singapore.

Why You Should Visit:
A good place to understand Singapore's national pride and collective identity.
The building itself is flashy, with a very modern addition and interesting details all around.

Tip:
Be sure to take one of the complimentary guided tours. They last an hour and the guides are knowledgeable and entertaining.
The 3rd level of the museum has an exit to Fort Canning Park. From there you can explore the park and visit the Battlebox, a museum/tour of a military bunker located inside the hill.