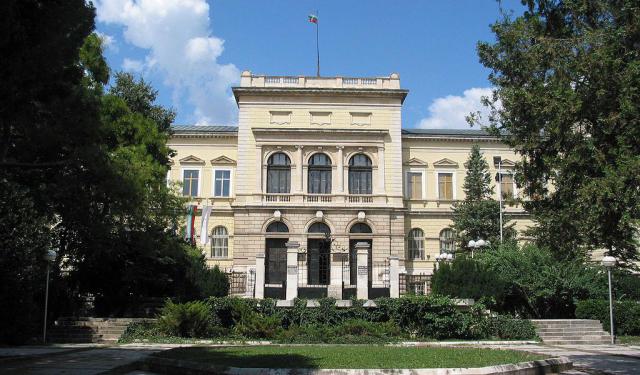 Image by Extrawurst on Wikimedia under Creative Commons License.

As well as being the largest seaside holiday spot in Northern Bulgaria, Varna is a home to many museums. There you can learn about the nature, wildlife, art and history of Bulgaria. Take our tour to see the collections that Varna museums proudly display.
How it works: Download the app "GPSmyCity: Walks in 1K+ Cities" from iTunes App Store or Google Play to your mobile phone or tablet. The app turns your mobile device into a personal tour guide and its built-in GPS navigation functions guide you from one tour stop to next. The app works offline, so no data plan is needed when traveling abroad.

Dedicated to Bulgarian artist Georgy Velchev, this house museum opened in 1961. Both the building and the paintings therein underwent serious restoration in recent years. Inside you'll find 240 works of art, including 50 pieces on permanent exhibition. There are also regular exhibitions of classic and contemporary Bulgarian art, plus some great cultural programs set to help the art reach the community at large.
Image by Jennifer R on Wikimedia under Creative Commons License.
2

Founded in 1888, the Varna Archaeological Museum is housed in a historic building designed in a neo-renaissance style by noted architect Petko Momchilov. Originally built as a girl's school, in 1945 it became state property. Since 1993 the museum has had exclusive use of the whole building -- until then partially occupied since 1895. One of the largest museums in Bulgaria, it has an exhibition area of more than 2,000 square meters with artifacts from the prehistoric, Thracian, Ancient Greek and Ancient Roman periods. There are also exhibits from the times of the medieval Bulgarian and Byzantine Empires, the Ottoman rule and the Bulgarian National Revival.
Image by Extrawurst on Wikimedia under Creative Commons License.
Sight description based on wikipedia
3

This Puppet Museum is one of the few of its kind in the country, and the smallest in Europe. Founded in 1985, it exhibits 130 different dolls -- all intricately designed and made by hand. This tiny museum is really worth seeing just to see how creativity can be channeled into a small yet beautiful piece of work.
Image by Richard Schofield on Wikimedia under Creative Commons License.
4

The museum is dedicated to the cultural and social life of Bulgarians during the National Revival. It's located on the site previously occupied by a school, then a church and a library complex. Established in 1959, the museum features an interesting exhibit of a restored school classroom that has a sand box children learned to write in and a blackboard bearing letters of the Bulgarian alphabet. There's also a fascinating exhibition at the museum recounting the history of the city and the surrounding region. It includes manuscripts, early printed editions of books and antique weapons from the 18th and 19th centuries.
Image by Ioaniki on Wikimedia under Creative Commons License.
5

5) Museum of Ethnography (must see)

The Museum of Ethnography is dedicated to preserving the old customs and traditions of Bulgaria. Here you can find out a lot about the life in Varna over the last two centuries, with traditional costumes, gowns, jewelry and arts and crafts on display. Founded in 1974, the museum itself is housed in a typically Bulgarian home with traditional decor.
Image by Ilonamay on Wikimedia under Creative Commons License.
6

Established in 1969, this history museum is housed in a building that has had several lives. Originally the Belgian consulate, the same building was later a hotel and then a prison before the museum opened on the site. Three exhibitions are spread across the three floors with a total display space of 600 square meters. Here you can learn all about Varna's economic, industrial, cultural, educational and touristic development from 1878 to 1939.
Image by Powerfox on Wikimedia under Creative Commons License.
7

Established in 1885, the Naval museum is located in the Sea Garden not far from the railway station. This large museum has more than 350 square meters of exhibition space, featuring fortifications on the Black Sea and the Danube coast dating back to medieval period, the Russian-Turkish wars of the 17th-19th centuries, and the Emancipation War of 1877/78. Outside the museum you can find a Drazki ship, the most renowned vessel of the national navy.
Image by Nikola Gruev on Wikimedia under Creative Commons License.