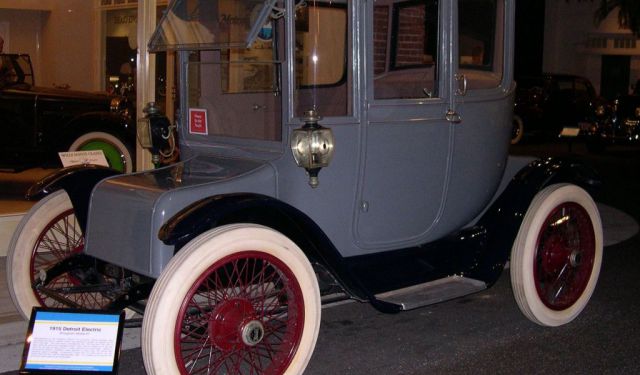 Image by Sfoskett on Wikimedia under Creative Commons License.

You will find many interesting museums in Detroit that specialize in art, history, science and more. The most popular museum in the city is the Motor Sports Museum. Detroit historically has had close ties to the auto industry, and this strong relationship continues to this day. Take this self-guided tour to visit Detroit's best museums.
How it works: Download the app "GPSmyCity: Walks in 1K+ Cities" from iTunes App Store or Google Play to your mobile phone or tablet. The app turns your mobile device into a personal tour guide and its built-in GPS navigation functions guide you from one tour stop to next. The app works offline, so no data plan is needed when traveling abroad.

1) Museum of Contemporary Art (must see)

MOCAD is housed in a 22,000-square-foot (2,000 m2) building, a converted former auto dealership designed by architect Andrew Zago. The architecture is intentionally raw and unfinished.

Image by diametrik on Flickr under Creative Commons License.
Sight description based on wikipedia
2

You will find Wsu Anthropology Museum in Wayne State University's historic Old Main building on the first floor. The museum exhibits archaeological and ethnographic items that tell the history of the first French immigrants to Detroit and their interaction with the locals. There is also a contemporary collection that speaks to the city as it is today. The museum is open on Thursday- Saturday from 12:00 pm to 4:00 pm and Friday 6:00 pm- 9:00 pm.
Image by Del arte on Wikimedia under Creative Commons License.
3

The Charles H. Wright Museum of African American History is located in the Cultural Center of the U.S. city of Detroit. Founded in 1965, it holds the world's largest permanent exhibit on African American culture. In 1997, it moved into a 120,000 square foot (11,000 m²) facility on Warren Avenue. The Wright Museum has dual missions, serving as both a museum of artifacts and a place of cultural retention and growth.

The Museum owns more than 30,000 artifacts and archival materials. Some of the major collections it is home to include the Blanche Coggin Underground Railroad Collection, the Harriet Tubman Museum Collection, a Coleman A. Young Collection and a collection of documents about the labor movement in Detroit called the Sheffield Collection. Also in the museum is an interactive exhibit called And Still We Rise: Our Journey through African American History and Culture, seven exhibition areas devoted to African Americans and their lives, the Louise Lovett Wright Research Library, and the General Motors Theater, which is a 317 seat facility for film, live performances, lectures, and presentations. A terrazzo tile creation titled Genealogy is in the Ford Freedom Rotunda Floor and the museum is topped by a 100 feet (30 m) by 55 feet (17 m) glass dome. The museum store sells authentic African art and books, as well as other merchandise.

Image by Madden on Wikimedia under Creative Commons License.
Sight description based on wikipedia
4

The Motor Sports Museum & Hall is housed in the Detroit Science Center. This museum displays a variety of historic and modern cars. There are classical cars, race cars, snow vehicles, motorcycles and more. You can view portraits of famous manufacturers and motor sports racers. You can also try a simulated driving machine and watch videos of famous races here.
Image by betsyweber on Flickr under Creative Commons License.
5

The Detroit Historical Museum is located at 5401 Woodward Avenue in the city's Cultural Center Historic District in Midtown Detroit. It chronicles the history of the Detroit area from cobblestone streets, 19th century stores, the auto assembly line, toy trains, fur trading from the 18th century, and much more.

Attorney and historian Clarence M. Burton donated his collections to the Detroit Public Library in 1914 leading to the development of the Detroit Historical Museum. In December 1921, Burton brought together 19 prominent local historians to found the Detroit Historical Society, an organization dedicated to the preservation of the city’s history. In 1927, membership offices were leased and Society treasurer J. Bell Moran was appointed to set up a museum. A curator was hired and on November 19, 1928, the “highest museum in the world” opened in a one-room suite on the 23rd floor of the Barlum Tower, now the Cadillac Tower.

In 1949, the Detroit Historical Museum acquired one of the last commercial sailing vessels on the Great Lakes, the J. T. Wing. It operated the ship as a museum until 1956 when it shuttered because of its deteriorating condition. On July 24, 1961, it was replaced by the Dossin Great Lakes Museum which opened on Belle Isle Park as a branch of the Historical Museum devoted to maritime history.

The Detroit Children's Museum is the oldest children's museum in the U.S. Although it was built with kids in mind, it also can be very interesting and fun for adults. It offers a way for kids to learn about the world and themselves in an enjoyable way. There is a Planetarium where you can catch a "Night Sky" show. The museum displays many artifacts related to important events in the U.S. history, such as WWII.
Image by Andrew Jameson on Wikimedia under Creative Commons License.