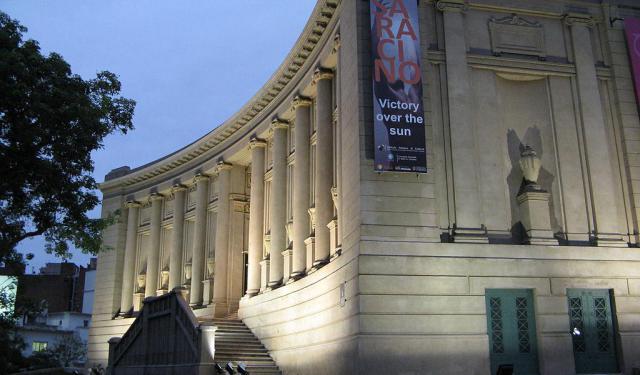 Image by Christian Córdova on Wikimedia under Creative Commons License.

Cordoba boasts a number of outstanding museums that are a must-see for each visitor to the city. There are museums about technology and science, fine arts museums and anthropology museums, all of them preserving and exhibiting the country and city's heritage. Take this walking tour to visit some of the most popular museums in Cordoba.
How it works: Download the app "GPSmyCity: Walks in 1K+ Cities" from iTunes App Store or Google Play to your mobile phone or tablet. The app turns your mobile device into a personal tour guide and its built-in GPS navigation functions guide you from one tour stop to next. The app works offline, so no data plan is needed when traveling abroad.

Museo de Ciencias Naturales is located in the former building of the Democracy Forum. The building has an interesting modern architecture, shaped as a snail. It features three circular platforms with exhibition areas. The museum displays a collection of mammals that date from 3 million years ago. Among them are Megatherium, Glyptodonts, and Macrauquenia. It has interactive exhibits and displays world paleontology, geology and megafauna. The museum is open from Monday to Friday 8:00 am- 8:00 pm, closed on Saturday and Sunday.
Image by Alicia Nijdam on Flickr under Creative Commons License.
2

Aside from those of its namesake, the museum maintains paintings and sculptures by other renowned local artists such as Juan Carlos Castagnino, Pablo Curatella Manes, Fernando Fader, Emilio Pettoruti, Lino Enea Spilimbergo, as well as lithographs by Pablo Picasso and paintings by Tsuguharu Foujita and Francisco Goya. The museum also hosts temporary exhibits and includes the provincial art archive and restoration workshop, as well as a library and educational facilities.

Image by tercerojista on Wikimedia under Creative Commons License.
Sight description based on wikipedia
3

The museum maintains 12 exhibit halls, a sculpture garden, library, and an auditorium for 120. Its collection of over 500 works includes those by Emilio Caraffa, Juan Carlos Castagnino, Gustave Courbet, Pablo Picasso, Joaquín Sorolla, Lino Enea Spilimbergo and Ricardo Supisiche, among others. The museum hosts ongoing temporary exhibits, as well.

Image by Leandro A. Martínez on Wikimedia under Creative Commons License.
Sight description based on wikipedia
4

Museo de Antropologia is an institution of scientific education. Its aim is to collect, preserve and exhibit the culture of humanity and society, ancient and contemporary. The museum is located at the National University of Cordoba, Faculty of Philosophy and Sciences. The museum encourages respect of other cultures and lifestyles in order to enhance and develop cultural heritage.
Image by Éclusette on Wikimedia under Creative Commons License.
5

Museo Municipal de Bellas Artes Dr Genaro Pérez was established in 1943. The design of the building in which the museum is housed was crated by Lanusse and Harry in 1905 in the French style. The museum's permanent collection consists of paintings from the 19th and 20th centuries. There are exhibited works by the greatest Argentinian artists such as Emilio Caraffa, Lucio Fontana and Antonio Berni. The museum is open daily, Tuesday to Sunday from 10:00 a.m. to 8:00 p.m.
Image by obvio171 on Flickr under Creative Commons License.