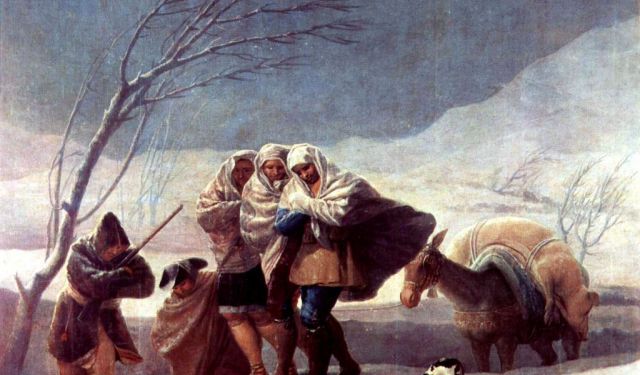 Image by Escarlati on Wikimedia under Creative Commons License.

As you take a short walk around Bordeaux you'll notice that several places here express real English influence, and that is because Bordeaux was managed by Englishmen for quite a long time. For a better understanding of the history and culture of this town you may visit some of its most popular and informative museums which are listed in the following guide.
How it works: Download the app "GPSmyCity: Walks in 1K+ Cities" from iTunes App Store or Google Play to your mobile phone or tablet. The app turns your mobile device into a personal tour guide and its built-in GPS navigation functions guide you from one tour stop to next. The app works offline, so no data plan is needed when traveling abroad.

The city of Bordeaux is one of France’s largest and most historic, yet it is undoubtedly most well known for one thing – WINE. The Bordeaux region produces an astonishing 960 million bottles of it each year. The area has been producing wine since Roman times but flourished when the city came under British rule in the 12th century. It has been one of the world’s leading wine regions for centuries, largely due to the local geography. Limestone beneath the soil makes it fertile and calcium rich, whilst the flat, well-irrigated land and cool Atlantic climate are perfect grape growing conditions.

The city of Bordeaux’s global success is celebrated by the Bordeaux Museum of Wine. The museum is found on rue Borie, a side street close to the left bank of the Garonne river, which flows through the city. Visitors can learn about the extensive history of the local wine trade, and how the wines made in Bordeaux became so globally renowned. The museum also features a functioning wine cellar and several historic documents from the region.

Why You Should Visit:
Unfortunately the videos are only in French but otherwise, these cellars are worth the visit.
You can move around at your own pace and look at the items. There is a good English translation.
There's also a cool smelling game you can play at the end, as well as a small guided tasting.

Tip:
Don't forget to buy some of the wine-soaked chocolate-covered raisins, a treat not to be missed!


Image by LimoWreck on Wikimedia under Creative Commons License.
2

The Museum of Contemporary Art is based on Rue Ferrere, close to the left bank of the Garonne in Bordeaux’s city centre. One of the most popular modern art galleries in France, the Museum of Contemporary Art is known locally by the acronym CAPC. It houses works of art dating from the 1960s to the present day. The museum is contained within a shipping warehouse that dates to the 19th century. Bordeaux had a reputation as a global maritime trade centre in that era, and the building once held produce shipped to the city from the Americas, India and Africa.

The Museum of Contemporary Art first opened its doors in 1974, becoming a permanent fixture in the city ten years later. The gallery hosts a range of seasonal exhibitions, as well as an extensive permanent collection. There is a wide range of modern works from French artists, particularly those from the Bordeaux area, and internationally acclaimed pieces. The museum offers guided tours, as well as annual membership, which can be purchased at the ticket office at the gallery entrance. Day admission tickets cost 5 Euros for adults, and 2.50 for students and the unemployed. The CAPC is open throughout the year, closing only on French public holidays.
Image by unusualimage on Flickr under Creative Commons License.
3

Muséum de Bordeaux (formerly Muséum d'histoire naturelle de Bordeaux) was one of the earliest dedicated natural history museums in France. Founded in 1791, it has been housed in its current location for over 150 years. The Hotel Lisleferme, constructed by French architect R.F. Bonfin, accommodated the museum in 1862.

The museum is well known for its extensive collection of artifacts relating to the natural world. Visitors can see preserved fossils and skeletons discovered all over the world. There are on-site libraries and coffee shops for academics and visitors who want to spend the day here. As well as a number of global exhibits, the building houses an impressive collection of locally sourced fossils and other archaeological finds. The museum plays a role in local ecological conservation, with a number of exhibits on ecosystems and endangered species. The renovation works are also being carried out with a view to making the museum one of the most ecologically friendly attractions in the country.
Image by unforth on Flickr under Creative Commons License.
4

The Musée National des Douanes (National Customs Museum) in Bordeaux houses over 5,000 historical objects relating to the French Customs Service, including paintings, weapons and uniforms. It is located in the city’s picturesque Place de la Bourse, at the heart of Bordeaux’s historic city center. Bordeaux is one of France’s oldest and largest port cities, with its heritage reflected in UNESCO’s name for the protected city center area – the ‘Port of the Moon’. The city has had trading links with other nations since the 12th century when it began sending goods to other British cities when ruled by King Henry II of England. It is a natural home for the Customs Service’s national museum.

The museum traces the history of customs in France, from medieval times up to the present day. As the Customs Service is the oldest public institution in France, the museum emphasizes its historical importance, showing the challenges that events like the French Revolution and the boom in trans-Atlantic trade caused for Customs officials.

Why You Should Visit:
Housed in a nice old structure by the waterfront, with a surprisingly large number of exhibits despite its limited size.
Informative because it shows the functioning & evolution of Customs, mixing History, Economics, and Culture all in one.
Fun because it brings together many items that have been seized by customs officers, which you'll be a tad surprised to see.

Tip:
A multilingual audio-guide is worth the extra €2.

The Museum of Decorative Arts is located on rue Bouffard, within the historic ‘Port de la Lune’ district of Bordeaux. It houses a stunning array of French decorative items, including paintings, engravings and sculpture. The museum also displays craft items from ceramics to jewellery. The pieces on display are drawn from across France and occasionally further afield, although there are many items that were made in Bordeaux itself.

Originally opening as a guide to arts and crafts in the 18th and early 19th centuries, the museum has recently been expanded, and now incorporates new exhibition areas dedicated to the 19th and 20th centuries. In particular, the new permanent exhibitions focus on the movements of Art Deco and Art Nouveau – French modernist styles which became popular in art and architecture across the world. Artists like Galle, Majorelle and Jean Bupas are all represented here. In addition, the former stables houses 150 pieces from the last 30 years, bringing the collection up to date.

The Museum of Decorative Arts is housed in the elegant Hotel de Lalande, which was built in 1779. It is open from Wednesday to Monday, 11 am to 6 pm, and admission is free. The museum is closed on public holidays.
Image by unforth on Flickr under Creative Commons License.
6

The Centre Jean Moulin is housed in an elegant 19th century former bank, on rue Vital-Carles. The Centre is in effect a World War 2 museum, charting the war in France through three separate exhibitions – the Resistance movement in France, the Deportation of Jews, and the Free French Forces. The museum was opened in 1967 by Jacques Chaban-Delmas, a member of the Resistance who later became Mayor of Bordeaux. It is named after Jean Moulin, the first president of the National Resistance Council. The museum hosts a huge amount of paraphernalia relating to the Resistance, including clandestine printing presses and magazines used by this undercover army.

The centre also hosts a permanent exhibition on the Free French Forces, an army comprised of soldiers that had escaped from occupied France. Led by General de Gaulle, they joined the Allied Forces in fighting Nazi oppression. The third area of the museum is dedicated to documenting the mass deportation of Jews, as well as Resistance members and others who fought Nazi invasion. In addition to the artefacts and documents on display, the centre also houses an extensive document library. The Centre Jean Moulin is open to the public from 2pm to 6pm Tuesday to Sunday, and offers guided tours to group visits.
Image by Credit: Benoît Prieur (Agamitsudo) - CC-BY-SA on Wikimedia under Creative Commons License.
7

The Museum of Aquitaine is housed in an elegant Neoclassical building on Cours Pasteur, close to rue Victor Hugo. Starting out as a gemstone museum in the 18th century, it now houses an impressively large collection of historical and archaeological exhibits relating to the region. Bordeaux is the capital of Aquitaine, a region stretching along the Atlantic coast that has been part of both the Roman and British Empires through its history.

The museum has four levels, offering 5000 square meters of space for permanent collections, as well as extra room for temporary exhibitions. The permanent exhibits chart the region’s history, from the prehistoric era to the modern day, via the Gallo-Roman era and the Middle Ages. There are also a number of interesting finds from around the world, particularly former French colonies in Africa and the South Pacific. The museum hosts temporary exhibitions at least once a year – recent subjects have included wine and African art.

The Museum of Aquitaine has recently undergone a major renovation, and added a new exhibition of Bordeaux’s Atlantic trade history. The museum is open all year round. Admission is 5.50 Euros for adults, with concessions available. Admission is free on the museum’s open day, on the first Sunday of each month. There is a dedicated tram stop adjacent to the main building.
Image by Tiraden on Wikimedia under Creative Commons License.
Sight description based on wikipedia

Bordeaux is classified as a "City of Art and History". The city has been included in UNESCO World Heritage List as "a great urban and architectural ensemble". Bordeaux is one of Europe's largest and most original 18th century architectural center. Don't miss the opportunity to tour the most famous architecture in Bordeaux.

Bordeaux, the port city on the Garonne River in the Southwest of France, is world-known primarily for its high-quality wines. Also, for the splendor of its Gothic cathedrals and 18th century mansions, Bordeaux is often referred to as the “City of Art and History”. The following orientation walk takes you to some of the most popular sights of Bordeaux.

As a cultural center, Bordeaux plays an important role not only in France alone. The city abounds in history, culture and traditions. Everyone who comes to Bordeaux has lots of new things to see and discover. If you’re an art lover and want to see the most important cultural places in the city, you may use the tour below, which will help you find them easier.

You can find a good concentration of various religious buildings in Bordeaux: churches, cathedrals and temples. Do not hesitate to take a tour through the famous Christian places of worship in town. The guide below may help you have this enriching experience.

There are many places in Bordeaux where you can spend a good time in a comfortable and friendly atmosphere. Originated in France and best performed here, the cabarets and comedy clubs are important night spots in the city today. In order to learn more about these entertaining venues you just have to follow the tour suggested below.