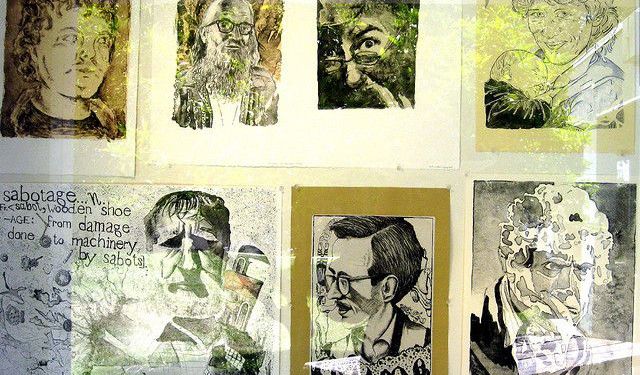 Image by Egan Snow on Flickr under Creative Commons License.

Before you set out on your trip to Santa Cruz, the following are top museums worth visiting. These museums tell their stories through photographs, history, art, surfboards and other related items. Take this tour to discover the natural history and best museums in this city.
How it works: Download the app "GPSmyCity: Walks in 1K+ Cities" from iTunes App Store or Google Play to your mobile phone or tablet. The app turns your mobile device into a personal tour guide and its built-in GPS navigation functions guide you from one tour stop to next. The app works offline, so no data plan is needed when traveling abroad.

Santa Cruz Mission State Historic Park was built in 1791 and is one of the mission’s buildings that still operates. This little museum in downtown Santa Cruz focuses on historical visual culture and carries a permanent collection of historical artifacts that exemplify the history of Santa Cruz. The museum offers many interesting activities and their program also includes tours of the Evergreen Cemetery, Octagon building and the Davenport Jail Museum. This building is the best venue for tourists interested in the unique history of this town.
Image by WCCasey on Wikimedia under Creative Commons License.
2

Founded in 1976, Artisans Gallery started as an artists' cooperative displaying different fine ceramics, beautiful paintings, interior supplies, jewelry and unique candles. The gallery gives preference to local artists as well as artists from around the world, as it displays their artwork and great talent. The artwork and Artisans' crafts inspire everyone, are fun to look at and deserve to be appreciated and used. Artisans try to achieve their motto “Dedicated to the Creative Spirit" by facilitating the making of American crafts with emphasis on the local artists that Santa Cruz and the other communities have to offer.

Image by GollyGforce on Flickr under Creative Commons License.
4

Founded in 1919, the Santa Cruz Art League is a membership organization free to the public. Until 1951, the Art League had its unique exhibitions at other venues, always in front of visitors' eyes. Being an art gallery, specialty shop, theater and classroom, the gallery encourages a large, select group of professional artists in an amiable environment, which makes the art open to the community. The gallery holds pproximately 12 art shows every year, some for artists, some for the community and some on an invitation basis. They hold classes, monthly workshops, as well as theater productions and book readings. Check out this gallery and experience the eccentricity of its exhibitions.

The Santa Cruz City Museum of Natural History, also known affectionately by locals as the "whale museum", is one of the earliest museums in the state of California. Founded from the Laura Hecox collection in 1905, the museum's collections grew extensively throughout the years, acquiring many Native American and archaeological artifacts, as well as natural history specimens of the past. Currently, the museum is housed in a Carnegie Library, named after the Carnegie philanthropic foundation that funded the construction of the library in 1915.

The Museum traces its beginnings to the late 19th century and the collection of naturalist Laura Hecox. Mss Hecox was born in Santa Cruz in 1854 and from childhood had a keen interest in the natural sciences. In 1904 Laura Hecox deeded her collection to the City of Santa Cruz for the establishment of its first public museum.The following year, the Hecox Museum opened in the basement of the new Carnegie Library. The museum opened August 21, 1905. There were displays of dried sea stars and crustaceans, Indian baskets and mortars, Eskimo artifacts, minerals, agates, gems, petrified woods, coral, bird nests and eggs, turtle and tortoise carapaces, and several cases of shells, including two hundred local species. The Hecox collection remained at the library until about 1917 when it was moved to the new Santa Cruz High School.

In 1984 the museum built outdoor exhibit kiosks on the Santa Cruz Wharf featuring marine life, fishing, and the wharf's history. In 1986 the Santa Cruz Surfing Museum was established as a satellite facility at the Mark Abbott Memorial Lighthouse. The displays of old surfboards and historical photographs attract 70,000 visitors each year.

Located in the county of Santa Cruz, the McNaught Fine Art offers fine European and American paintings to all their customers. They provide art services including conservation, framing, sales and restoration. It is associated with some industries like Schools and Educational Services as well as Museums And Art Galleries. For over twenty-five years, the gallery has researched every work of art before it was up for sale, which is why the acquisition of fine art is always a great pleasure for its customers.
Image by H G M on Flickr under Creative Commons License.