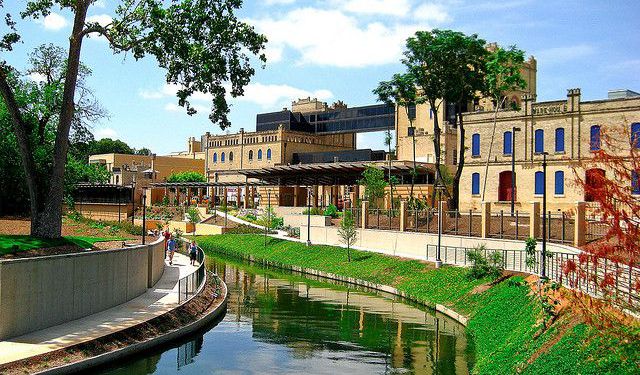 San Antonio is a rare cultural discovery. It has a great variety of museums, from historic heritage to contemporary art, Latino and American combined in such a marvelous cultural mix; it ibrings true satisfaction to all art and history lovers. You can see attractions like Edward Steves Homestead, Institute of Texan Culture or Louis Tussaud’s Waxworks museum. Take this tour to discover San Antonio's greatest museums.
Image Courtesy of Flickr and AndYaDontStop.
How it works: Download the app "GPSmyCity: Walks in 1K+ Cities" from iTunes App Store or Google Play to your mobile phone or tablet. The app turns your mobile device into a personal tour guide and its built-in GPS navigation functions guide you from one tour stop to next. The app works offline, so no data plan is needed when traveling abroad.

The Buckhorn Saloon & Museum is a privately run enterprise that has became a tourist attraction for its unique collections. Teddy Roosevelt and his Rough Riders were reputed to frequent this establishment.

Housed in 1956 in the Old Lone Star Brewery, his collection passed on to Friedrich's heirs who had then moved it to the current location at 300 E. Houston Street. Mary Friedrich Rogers, granddaughter of Albert Friedrich, and her husband Albert Rogers, acquired the collection in 1997. The Hall of Texas History Wax Museum portion of the Buckhorn depicts historic events in Texas. In addition to the horn collection, a visitor will also find rattlesnake art, and memorabilia of both Native Americans and the cowboy culture. Among the exhibits here are The Carnival of Curiosities and The American Sideshow.

The Texas Ranger Museum features authentic Texas Ranger Division artifacts, including automatic handguns, shotguns, badges, photographs and more. The museum also features Ranger Town, a recreation of San Antonio at the turn of the century, featuring a replica Buckhorn Saloon, jail cell, blacksmith shop and a replica of the 1934 Ford V8 Deluxe — the famous Bonnie & Clyde getaway car. The Texas Ranger Museum is not affiliated with the official Texas Ranger Hall of Fame and Museum in Waco.

The Museum opens at 10 am everyday. Closing times vary.


Image Courtesy of Wikimedia and Billy Hathorn.
Sight description based on Wikipedia.
2

Louis Tussaud conceived a wax museum, which is similar to Madame Tussaud's wax museum, but doesn't have much to do with it. Louis Tussaud's Wax Museum is part of the same company that owns Ripley's Believe it or Not! and they are featured at the same location. It is located near Alamo downtown, and is very attractive to visitors due to the remarkable wax figures, such as Jesus Christ, Jack Nicholson, Harrison Ford and many other beloved characters, found within.
Image Courtesy of Flickr and Shawn Perez.
3

3) Institute of Texan Culture (must see)

Institute of Texan Cultures is a museum and library located in HemisFair Park in downtown San Antonio. It serves as the state's primary center for multicultural education with exhibits, programs and events like the Texas Folklife Festival, an annual celebration of the many ethnicities that make up the population of Texas. The Folklife Festival has been held yearly since 1972. The facility, established by the Texas Legislature on May 27, 1965, originally served as the Texas Pavilion at HemisFair '68 before being turned over to the University of Texas System. It is now part of the HemisFair Park Campus of the University of Texas in San Antonio.
Image Courtesy of Wikimedia and Michael Barera.
Sight description based on Wikipedia.
4

The San Antonio Art League & Museum (SAALM) is the oldest arts institution in San Antonio. The League's location changed many times until, after a long struggle and some moving around, it was finally given the opportunity to settle in a venerable building in the heart of the historic King William District.

Visitors to the SAALM often ask about its building, and are often surprised to find out that, although it was built in 1896, it has a very non-Victorian "pedigree". The intimate house-turned-museum and gallery today houses over 600 works in its permanent collection, and is mainly focused on local and regional art, featuring works in all media - including paintings, drawings, prints and photographs, furniture, ceramics and sculpture - available for public viewing. The heart of the collection are the paintings from the Edgar B. Davis Texas Wildflower Competitive Exhibitions dating back to the 1920s.

The Edward Steves Homestead is the showcase of an immense wealth that was amassed by lumber baron Edward Steves, founder of the Steves Lumber Company, who immigrated to Texas from Germany in 1849. The homestead incorporates an elegant three-story mansion with a concave mansard roof decorated in iron cresting, which is characteristic of the French Second Empire and the Italian Villa styles, plus some out buildings. Made of ashlar limestone (which means “precisely cut and finished”, also known to masons as “peck work”), the Steves mansion was built in 1876, possibly to the design by Alfred Giles, the prominent San Antonio architect.

As for the homestead's out buildings, they include The River House, a one-story brick structure at the rear of the Homestead property, which held one of the earliest natatoriums, or indoor swimming pools, in San Antonio. This brick-lined bit of luxury used to be filled with water from the artesian well located on the property. Mrs. Steves is said to have swam there every day, at two o’clock, regardless of the weather.

To hold storage during the homestead construction, the two-story frame and stone Carriage House was built in 1875, a year before the mansion itself. Thoroughly restored in 1976-1977, the Carriage House still provides storage for the Edward Steves Homestead today.

Once the mansion was complete, servants’ quarters were necessary to house the full-time gardener and a “stable boy” who worked for the Steves family. This was built around 1877. The Servants Quarters was restored in 1983-84 and currently serves as a Visitors Center, where tickets are sold and tours originate.

Listed on the National Register of Historic Places, the homestead remained a family residence until 1952 when Steves’ descendants donated it to the San Antonio Conservation Society who then turned it into a museum in 1954. Visiting this museum today makes one feel back in time at least hundred years.