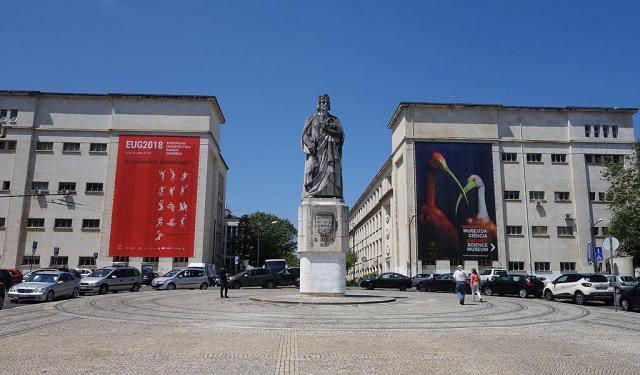 Image by FlyingCrimsonPig on Wikimedia under Creative Commons License.

Coimbra is a very old city with a rich past and history. The oldest university in Europe was established here and that is why there are several museums in the city that are related to science. The scientific museums are of great importance there and display rare collections. Take this self-guided tour to visit the most popular museums in Coimbra.
How it works: Download the app "GPSmyCity: Walks in 1K+ Cities" from iTunes App Store or Google Play to your mobile phone or tablet. The app turns your mobile device into a personal tour guide and its built-in GPS navigation functions guide you from one tour stop to next. The app works offline, so no data plan is needed when traveling abroad.

1) Museum of Science (must see)

Formerly there were several museums in the university, including a museum of physics, a museum of zoology, a museum of natural history, and a museum of mineralogy and geology, which were managed by different university departments. They merged together in 2006/2007 to form the Science Museum of the University of Coimbra. Most of these collections date back to the reform of the University promoted by the Marquis of Pombal in 1772, where the teaching of the sciences took major importance, and are lodged in the contemporary buildings of the 18th century. This constitutes the most important science collection in Portugal and one of the most important ones in Europe.

Image by Anabela Smões on Flickr under Creative Commons License.
Sight description based on wikipedia
2

The Municipal Museum of Coimbra is situated in the centre of the city, in its pedestrianized area. You can see the amazing collection of musical instruments. These instruments were collected by Doctor Louzã Henriques; they are mainly stringed instruments. You can also see an art collection that includes Portuguese paintings and sculptures. There is furniture, ceramics, silver and decorative art items on display at the Municipal Museum.
Image by # 2_Portuguese_guitars.jpg: TenIslands on Wikimedia under Creative Commons License.
4

The Academic Museum represents the spirit of this Portuguese 'Oxford' city. It is housed in the building of the ancient college of St. Jerome. It was created by professors of the Academic Association. There are famous Coimbra fado music instruments on display. Fado is a type of traditional music that originated in Coimbra. You can see also records, photographs and other documents relating to studies in Coimbra. There are plaster figurines caricaturing some famous local persons. There are hand painted old pieces of china and works made by students based on academic traditions, among other things.
Image by Gene Markey on Wikimedia under Creative Commons License.
5

Casa Museu Bissaya Barreto is a fascinating little museum located near the Botanical Garden. It offers a unique and really interesting experience as there are some different things to see. Bissaya Barreto was a surgeon from Coimbra, as well as a scholar and a man passionate about fine arts. His wonderful 19th-century mansion was transformed into a museum. His house is full of Portuguese sculptures and paintings, Chinese porcelain and other fine art objects.
Image by Domingos António de Sequeira on Wikimedia under Creative Commons License.