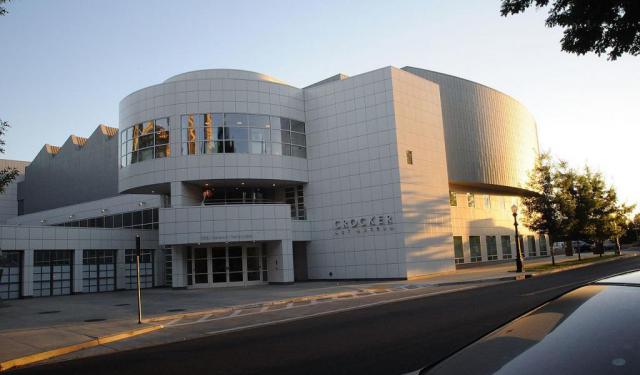 Image by Coolcaesar on Wikimedia under Creative Commons License.

Sacramento is the city where you can visit numerous amazing museums. You can discover here different things that belong to the culture and history of the city. We encourage you to find out about some of the most well-known and impressive museums in the U.S.A.
How it works: Download the app "GPSmyCity: Walks in 1K+ Cities" from iTunes App Store or Google Play to your mobile phone or tablet. The app turns your mobile device into a personal tour guide and its built-in GPS navigation functions guide you from one tour stop to next. The app works offline, so no data plan is needed when traveling abroad.

The California State Railroad Museum is a museum in the state park system of California, interpreting the role of the "iron horse" in connecting California to the rest of the nation.The museum features 21 restored locomotives and railroad cars, some dating back to 1862. Other exhibits show how the influence of railroads changed American society, influencing travel, commerce and daily life, as well as the lives of railroaders and the diversity of people who work on railroads. Changing exhibits featuring photography, ephemera, and artifacts from the museum's collection. Adjacent to the main museum building is reconstruction of the 1870s-era Central Pacific Railroad passenger station and freight depot on Front Street, which houses historic and contemporary railroad equipment.
The museum has its origins in 1937, when a group of railroad enthusiasts in the San Francisco Bay Area formed the Pacific Coast Chapter of the Railway & Locomotive Historical Society. This organization worked for years to promote the idea of a railroad museum, donating 30 historic locomotives and cars to the California Department of Parks and Recreation to be the nucleus of a State-operated museum in Sacramento.
Opening hours: Monday - Sunday: 10 am - 5 pm

Image by Swampyank on Wikimedia under Creative Commons License.
Sight description based on wikipedia
2

Wells Fargo Center is a 129 m office building in downtown Sacramento California. Construction on the skyscraper began in 1990 with completion in 1992, and yet stands as the tallest building in the city. The building occupies a 2.3-acre city block, and features a five-story granite and marble walled interior within a clear glass atrium. The project was developed by William Wilson & Associates in partnership with Crocker Properties. The architect was Hellmuth, Obata and Kassabaum (HOK).

Image by Marcin Wichary on Flickr under Creative Commons License.
Sight description based on wikipedia
3

The California State Capitol is home to the government of California. The building houses the bicameral state legislature and the office of the governor. Located in Sacramento, the Neoclassical structure was completed between 1861 and 1874 at the west end of Capitol Park.

The building is based on the U.S. Capitol building in Washington D.C. The west facade ends in projecting bays, and a portico projects from the center of the building. At the base of the portico, seven granite archways brace and support the porch above. Eight fluted Corinthian columns line the portico. A cornice supports the pediment above depicting Minerva surrounded by Education, Justice, and Mining. The dome is 64 m high, matching that of the U.S. Capitol, and supports a lantern with a smaller dome capped with a gold-leafed orbed finial.
The California Senate chamber seats its forty members in a large chamber room decorated in red, which is a reference to the British House of Lords, also the upper house of a bicameral legislature. The chamber is entered through a second floor corridor
Opening hours: Weekdays 8 am - 5 pm; Weekends 9 am - 5 pm;
Image by Coolcaesar on Wikimedia under Creative Commons License.
Sight description based on wikipedia
4

4) The California Museum for History, Women and the Arts

The California Museum, formerly The California Museum for History, Women and the Arts is housed in the State Archives Building in Sacramento, one block from the State Capitol. The building has more than 20,000 square feet of exhibit space, and facilities for lectures, performances, receptions and events.

Originally called the Golden State Museum, The California Museum opened in June 1998 as a unique public/private partnership. In May 2004, former First Lady Maria Shriver, working with the Secretary of State and California State Parks, presented an exhibit titled “California’s Remarkable Women.” This trailblazing exhibit honors the legacy and celebrates the accomplishments of California’s remarkable women of yesterday and today. The exhibit’s success set in motion the idea for The California Museum for History, Women and the Arts—a Museum that tells the story of California and for the first time the stories of California’s women.

Towering six stories over the Museum’s courtyard, the public art piece “RIGHTS” inspires thought and comment. Sculpted into the massive wall are words taken from California’s Constitution and chosen for their enduring meaning. Depending on the angle of the light, different words leap forward. In the early morning or late afternoon, the giant word “RIGHTS,” the underlying theme of the piece, stands out, while at midday other “rights,” indicated by words such as “redress” and “assemble,” are more apparent. The artists’ grouping of the words adds another layer of meaning, punctuated by colors drawn from California’s own palette of forest, ocean, and desert hues.

Leland Stanford Mansion State Historic Park is a state and federally protected area in Sacramento. It features the Leland Stanford House, a mansion once owned by Leland Stanford, Governor of California from 1862 to 1863, U.S. Senator from 1885 to 1893, railroad tycoon, member of the Big Four and founder of Stanford University. The house was designated a National Historic Landmark in 1987.The original owner and builder of the home was Sacramento merchant Shelton C. Fogus, a wealthy Sacramento building merchant.

The Renaissance Revival architecture of the original home is attributed to Seth Babson.Between 1871 to 1872, the Stanford family embarked on an ambitious remodeling of the residence. As Stanford had to attend his gubernatorial inauguration by rowboat in 1862, the home was raised twelve feet in response to frequent flooding from the Sacramento River.The home was also expanded from 4,000 square feet to 19,000, and redesigned to reflect the French Second Empire architecture popular of the period. In 1978, the government of California acquired the property for use as a state park. The Sisters of Social Services would remain on the grounds until 1987, when California State Parks designated the mansion and the immediate surrounding land as a state historic park.

Beginning in 1991, with the help of Sacramento businessman and former Stanford University professor Peter McCuen, the Stanford Mansion underwent a 14-year renovation at the cost $22 million dollars. The repairs and restoration were completed in 2005, when the mansion opened to the public. California State Parks offers guided tours through the fully refurbished home.

The Crocker Art Museum is one of the leading arts institutions in California, and the longest continuously operating art museum in the West. Located in Sacramento, the Crocker has been an art innovator since 1885. The Museum boasts one of the state’s premier collections of Californian art dating from the Gold Rush to the present day, a world-renowned collection of master drawings, European paintings, one of the largest and most comprehensive international ceramics collections in the U.S. and collections of Asian, African, and Oceanic art. In addition to its impressive collections, the Crocker offers a wide variety of public programs.
The expanded Museum includes a new education center with four studio art classrooms, an art education resource room for teachers and docents, an expanded library, and student and community exhibition galleries, as well as an auditorium and public gathering places.
Opening hours: Tuesday – Sunday: 10 am - 5 pm; Thursday: 10 am - 9 pm
Image by Amadscientist on Wikimedia under Creative Commons License.
Sight description based on wikipedia
7

California Automobile Museum, formerly the Towe Auto Museum, is an automobile museum located in Sacramento. It has a collection of over 160 classic cars, race cars, muscle cars, hot rods and early models displayed throughout 72,000 square feet (6,700 m2) of museum space. The mission of the California Automobile Museum is to educate and entertain while preserving and promoting the automobile and its influence on our lives.

The California Automobile Museum was the first automobile museum in the west to be established in perpetuity. Founded in 1983 as the California Vehicle Foundation, the museum opened to the public in 1987 as the Towe Ford Museum, proudly displaying the largest collection of Fords in the world, courtesy of Edward Towe, a Montana banker. In 1997, the museum was renamed the Towe Auto Museum, as they began displaying vehicles of all makes and models. In 2009, the Board of Directors officially changed the name of the museum to the California Automobile Museum, reflecting the expanded mission it has grown into over the last 25 years. Most of the vehicles currently on display are on loan from private exhibitors. Only approximately 25% of the vehicles are owned by the California Vehicle Foundation. Some of the cars are on loan for a month and some for five years, so the display is a constantly changing exhibit of rolling stock to better tell the story of the development of the automobile and its effect on our lives.