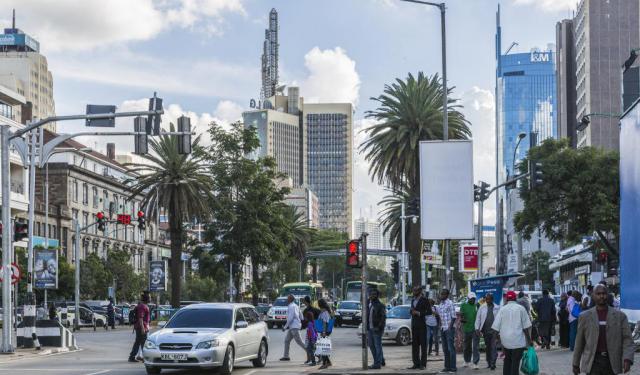 Nairobi is Kenya’s capital, the largest of the country and the fastest developing city on the continent. The life of Nairobi is mostly concentrated in the Central Business District. Here are situated the highest skyscrapers of the country with hundreds of offices. This is a busy place; nonetheless you can find many spots where you can unwind and relax. Here are some very beautiful parks. Check out the most popular attractions in Nairobi’s Center.
Image Courtesy of Flickr and Ninara.
How it works: Download the app "GPSmyCity: Walks in 1K+ Cities" from iTunes App Store or Google Play to your mobile phone or tablet. The app turns your mobile device into a personal tour guide and its built-in GPS navigation functions guide you from one tour stop to next. The app works offline, so no data plan is needed when traveling abroad.

As well as being specially designed and built to withstand earthquakes, the building was also developed to measure seismic activity in the region and collect scientific data. The innovative architectural design has its foundations forming two deep basements that rest on a concrete raft to protect it from seismic shifts in the earth. The tower is open every day, except public holidays; however, around the 20th of each month it is quite congested with Kenyans filing their taxes.

Image Courtesy of Wikimedia and Dexxe.
Sight description based on Wikipedia.
2

The Railway Museum is just next to the Nairobi Rail Station and showcases the golden age of rail travel from the now defunct East African Railways. There are plenty of displays of steam and diesel locomotives that all date from the late 19th century to before World War II. The various passenger cars, trucks and rolling stock make for fascinating viewing as they take you back into the past, when travel was a true adventure. At the museum you can also learn about the laying of the railway, as laborers had to overcome extreme conditions and people-eating lions that attacked the camps and put a stop to construction. The museum was opened in 1971 and is today maintained by Kenya Railways. A miniature railway has recently been added to the Railway Museum.

The museum is still connected to the railways and there are often restored locomotives that head out on sightseeing excursions. The current curator of the museum has plans to substantially increase this side of the museum’s operations to bring the locomotive past to life for visitors. The pride of the museum is the Class EB3 2409 locomotive, which has been fully restored to its former splendor and is now fully functional. The Railway Museum is open seven days a week, including most public holidays.

Image Courtesy of Flickr and Ninara.
Sight description based on Wikipedia.
3

Parliament is a very attractive building both for local people and for tourists. There is a clock tower adjoining it. It was built in the 1940s, when Kenya was still a British colony. Here you can learn about Kenya’s political life. You can take a tour of its archives and look through the official documents, agreements and orders. If you want to see how Parliament works, you can be present during one of its open sessions and watch from the visitors' gallery. But bear in mind that applause is forbidden.
Image Courtesy of Flickr and Jorge Láscar.
4

Mzee Jomo Kenyatta was the first president of Kenya. He died in August 22, 1978, of a heart attack and the Mausoleum is the place where his body lies. The mausoleum is situated near the Parliament building. It is guarded night and day and photography is forbidden.
Image Courtesy of Flickr and Richard Portsmouth.
5

This amazing building is situated near the main city market. This area is very busy, but that does not prevent you from admiring its grandeur. The beautifully decorated minarets contrast with the Mosque’s interior which is rather plain without any bright decorations or luxurious details.
Image Courtesy of Flickr and zskdan.
6

This small charming park was named after its founder. A.M. Jevanjee, a member of the Indian Community in Kenya and a successful businessman. Today it is very popular among preachers who preach there during lunchtime. The park has many trees and is a favorite rendezvous point for clerks who work in the offices surrounding the park.
Image Courtesy of Flickr and chema.foces.
7

The National Theater in Nairobi forms part of the Kenya Cultural center and was established to showcase local and international productions, as well as to provide rehearsal space to encourage cultural endeavors. It is run as a semi-autonomous government agency under the Ministry of State for National Heritage and Culture in Kenya. From post-modern plays to traditional dance and even the odd beauty pageant, there is always plenty happening at the theater. The national Conservatorium of Music is also located within the Kenya National Theater complex. Visitors can enjoy a show or even take part in workshops that are regularly presented within the theater space.

As well as providing dedicated cultural space, there is an excellent bar and restaurant on the first floor. Wasanii offers a range of international and local dishes for guests to enjoy and is just as well known for its interior decor as its food and drinks. The restaurant regularly holds art exhibitions, book launches and other small scale, but interesting cultural events. Following a recent facelift, there is a renewed energy to the center and the theater directors are ensuring there is a year round offering of eclectic artistic events available to both locals and visitors.

Image Courtesy of Flickr and US Army Africa.
Sight description based on Wikipedia.
8

All Saints Cathedral is one of the largest and oldest churches in Nairobi and is listed for its historical significance by the Ministry of National Heritage. It was founded in 1917 by the Anglican Church and was formerly consecrated as a cathedral in 1952. The cathedral was designed in the British Gothic style and was built from Kenyan stone, which has resulted in a seamless blending of the two cultures. The interior of the church features ribbed ceilings and impressive arches. Behind the altar there are stunning round stained glass windows. The façade of the cathedral features two immense stone towers that evoke medieval England.

All Saints Cathedral has a large congregation of around 4,500 every Sunday and they are very active in the community running HIV/AIDS awareness and support campaigns, mothers and children’s services and a primary school was built as part of the cathedral in 1988. Regular services are held throughout the week in both English and Kiswahili; on Sundays there are 13 services held throughout the day. Its location close to Uhuru Park makes it an important location for important dates on the Kenyan calendar. You can organize for a tour through the cathedral or take part in volunteering by contacting the cathedral Anglican diocese.
Image Courtesy of Flickr and antmoose.
9

Uhuru Park, also known as the Freedom Park, is one of the city’s chief meeting places for locals to relax, filled with well-tended gardens and shady trees forming a green lung within a walking distance of the city center. There is an artificial lake in the park where many visitors like to take boat rides or walk over the foot bridges to the island. Wandering through the park you are likely to see many people enjoying picnics, outdoor sports and even dance groups rehearsing.

From the park you are able to take in a vista of the city and there are a number of monuments to visit. Uhuru Park is also well known as being a location for political protests and gatherings. Indeed, protests, held by Wangari Maathai to save the park from demolition by President Moi, led to her being awarded the Nobel Peace Prize and there is a monument erected in the park to honor her. The independence monument is important to the Kenyan people as it was the site upon which their independence was declared at midnight December 12th, 1963. The monument depicts a group of freedom fighters at the base and a column rising to 24 meters, upon which is a dove of peace.
Image Courtesy of Wikimedia and Bobokine.
10

Central Park is a very large space were you can walk and relax if you are tired of the daily routine. It is well-groomed and has been renovated to be more attractive and impressive than ever. There is the famous Nyayo Monument which is a pyramidal monument that was built in honor of Kenya’s second president, Daniel Toroitich arap Moi. Nyayo means "footsteps".
Image Courtesy of Wikimedia and Rotsee2.