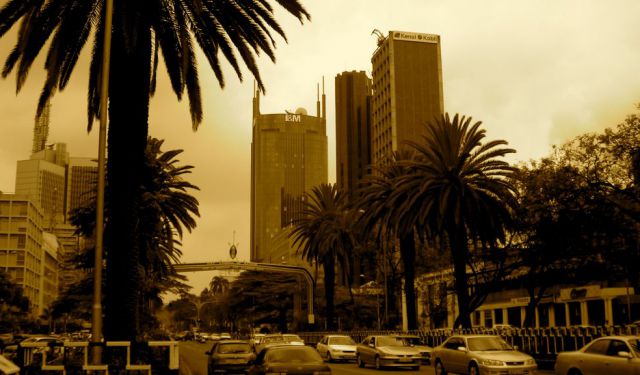 Image by nd.strupler on Flickr under Creative Commons License.

Nairobi is quite a new and developing city and it has a lot of places of interest. One thing that is worth seeing is the Nairobi skyline with its skyscrapers. These high glass glittering buildings are really fascinating. Most of them are located in the Central Business District of the city which is where you can find the highest buildings in eastern and central Africa. Check out the highest buildings of Kenya in the next tour.
How it works: Download the app "GPSmyCity: Walks in 1K+ Cities" from iTunes App Store or Google Play to your mobile phone or tablet. The app turns your mobile device into a personal tour guide and its built-in GPS navigation functions guide you from one tour stop to next. The app works offline, so no data plan is needed when traveling abroad.

Park View Towers is a commercial building, situated in the northwest of the central district, which has a lot of offices. It was built in the 1990s. This glittering building is located next to the Central Park where local people and tourists as well like to rest and, occasionally, have a picnic.
Image by Rotsee2 on Wikimedia under Creative Commons License.
2

The name of the building comes from the political philosophy of Daniel arap Moi, Kenya's second President, who declared the country would grow step by step, such as repose, devotion and unity. The building is the headquarters of the Nairobi Government and other official agencies. But the history of this building is terrifying. Just a few decades ago there were torture chambers. Many people were broken in flesh and spirit within its sinister walls, accused of being political dissidents. Today there is a national monument.
Image by Rotsee2 on Wikimedia under Creative Commons License.
3

I&M Bank Tower is the main building of the bank located right in the center of the city, on Kenyatta Avenue. It was finished in 2001. The tower is an 18 story building, 99 meters tall. This commercial building is also the headquarters for some mass media companies.
Image by Mkimemia on Wikimedia under Creative Commons License.
4

Lonrho House is one of the most impressive constructions of the city. Glittering in the sun its glass facade reflects the surrounding buildings. Built in 1990 it was the flagship of a prominent eastern African hotel chain. Lonrho House is 88 meters tall and consists of 22 floors. You can also visit Gallery Watatu that is located on the first floor.
Image by Rotsee2 on Wikimedia under Creative Commons License.
5

The Kenyatta International Conference center is one of Nairobi’s tallest buildings and its 30 stories look out over the central business district. The building was designed to reflect Kenya’s tribal past, while also looking towards the future, and it is the only building in the city with a helipad. It is one of the city’s favored venues for exhibitions, seminars, conferences and events, thanks to its excellent facilities and proximity to high quality hotels. The conference center was built between 1966 and 1973 and was funded by the Kenyan Government it was passed into the hands of the KANU political party, the only legal political party at the time, in 1989, but was returned to the Kenyan people when they were voted out of office in 2003.

There are several venues within the center, the largest being The Plenary, which has a capacity of 5000 people. The Plenary is the largest conference space of its kind in East Africa and it is used for large conferences and balls and features high ceilings and high quality sound equipment, including wireless simultaneous interpretation equipment. The Auditorium has seating for 800 guests over three balconies. The Courtyard features a statue of Jomo Kenyatta along with fountains and a large paved space for relaxation or to host outdoor stalls.

Image by Jorge Láscar on Flickr under Creative Commons License.
Sight description based on wikipedia
6

As well as being specially designed and built to withstand earthquakes, the building was also developed to measure seismic activity in the region and collect scientific data. The innovative architectural design has its foundations forming two deep basements that rest on a concrete raft to protect it from seismic shifts in the earth. The tower is open every day, except public holidays; however, around the 20th of each month it is quite congested with Kenyans filing their taxes.

Image by Dexxe on Wikimedia under Creative Commons License.
Sight description based on wikipedia