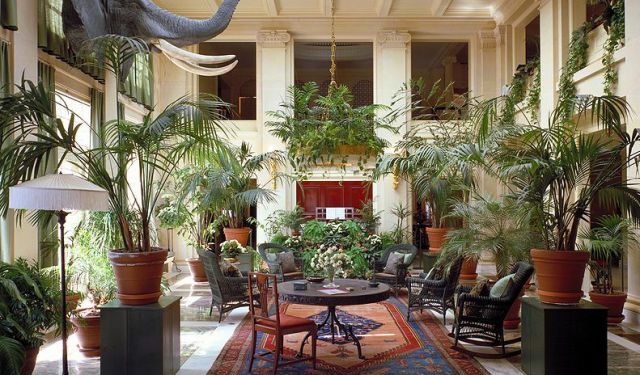 Neighbourhood of The Arts Tour in Rochester (Self Guided), Rochester

One of the most interesting and worthwhile visiting areas of Rochester is The Neighbourhood of the Arts, a place vibrating with creativity and talent. It includes valuable museums, galleries, artist studios and other cultural institutions that can be discovered by taking this self-guided tour.
How it works: Download the app "GPSmyCity: Walks in 1K+ Cities" from iTunes App Store or Google Play to your mobile phone or tablet. The app turns your mobile device into a personal tour guide and its built-in GPS navigation functions guide you from one tour stop to next. The app works offline, so no data plan is needed when traveling abroad.

A premier venue providing arts, performing and entertainment is Rochester Broadway Theatre League. Since 1957 when it was founded, the theatre league's purpose has been to promote and show off plays of all kinds, from Broadway musicals to comedies, from classic drama to newer ones and also to inspire artists and educate those who want to become professionals. Through its effort and talented people, the league managed to become famous and guarantee its audience the best plays and the best mood.
Image by Alina Sofia on Flickr under Creative Commons License.
2

An indispensable place of the Neighbourhood of the Arts is Village Gate, an amazing place that perfectly combines interesting shops, art studios and entertainment. In the shops, one can purchase exquisite things such as vintage clothes, antiques and collectibles or jewellery, each of them resembling a piece of artwork. Village Gate is a great place to explore, so don't hesitate to do it when you are in the neighbourhood.
Image by rotovator1969 on Flickr under Creative Commons License.
3

Memorial Art Gallery provides an amazing retrospective of about 5000 years of history and culture, presenting vestige of the past, as well as contemporary pieces of art. Its huge collection is considered to be one of the best in the state. During the year a lot of temporary exhibitions, presentations and family activities are hosted by MAG. The art gallery is open Wednesday through Sunday between 11 am and 5 pm and Thursdays from 11 am to 9 pm.
Image by DanielPenfield on Wikimedia under Creative Commons License.
4

Image City Photography Gallery is a unique space, where there is a large number of interesting photographs by many talented artists. It offers space for everyone to present their works and to admire the works of others. One will be impressed by the diversity of topics approached and the quality of every work. The gallery works Tuesday - Saturday noon - 6pm and Sunday noon - 4pm.
Image by Image City Photography Gallery under Creative Commons License.
5

Baobab Cultural Center offers its visitors the unique experience of discovering a little part of Africa's history and culture. Presenting theme exhibitions, documentaries and films, reading and discussions, the centre brings Africa closer and is trying to clear away the prejudices and racial ideas.
Image by Baobab Cultural Center under Creative Commons License.
6

The George Eastman House is the world's oldest museum dedicated to photography and one of the world's oldest film archives, opened to the public in 1949 in Rochester. World-renowned for its photograph and motion picture archives, the museum is also a leader in film preservation and photograph conservation, educating archivists and conservators from around the world. Home to the Dryden Theatre the museum is located in and around the house built by George Eastman, the founder of Eastman Kodak Company. The house was designated a National Historic Landmark in 1966.

The George Eastman House Museum of Photography was chartered in 1947. Today, the museum's full name is the George Eastman House International Museum of Photography and Film. From the outset, the museum's mission has been to collect, preserve, and present the history of photography and film. The museum opened its doors on November 9, 1949, displaying its core collections in the former public rooms of Eastman's house.

With an increasing number of materials to store, additional space became critical. A new facility opened to the public in January 1989.In 1996, the museum opened the Louis B. Mayer Conservation Center, one of only four film conservation centers in the United States. The facility houses the museum's rare 35 mm prints made on cellulose nitrate. The museum's permanent collection comprises more than 400,000 photographs and negatives dating from the invention of photography to the present day.

Image by Dmadeo on Wikimedia under Creative Commons License.
Sight description based on wikipedia
7

The Museum had its start as the Rochester Municipal Museum. The museum fell on hard times during the Great Depression; local physician John Ralston Williams spearheaded an effort to keep the museum afloat, and he would go on to serve as chairman of the museum's governing commission for 28 years. It was during Williams' tenure that the Bausch & Lomb chairman, Edward Bausch, bequeathed land on East Avenue for the museum's use.

Overlooking Lake Ontario from the American side, Rochester, NY is one of the "most livable" cities in the U.S. Apart from the Genesee River’s High Falls, downtown Rochester abounds in many other, man-made attractions: cultural spots, historic and architectural landmarks. Among them the Kodak Tower, the National Museum of Play, the Memorial Art Gallery and more.

Brown's Race area is one of the most valuable districts in the city, illustrating the inceptions of many important brands and inventions. The area comprises historic buildings, which houses valuable factories, and gives you the opportunity to get familiar with Rochester's industrial history. Take this tour and discover the wonders of Brown's Race district.

The city of Rochester's community is diverse and thus many religions are observed within its borders. The spiritual attitude is reflected by the historic churches, their congregations and architectural elements. Take this tour and discover the most interesting and beautiful religious venues.

The city of Rochester can boast many interesting and worthwhile places that reflect beauty, history, culture and nature, each of them able to impress and teach something new. Take this guide in order to discover entertaining offers within the city.