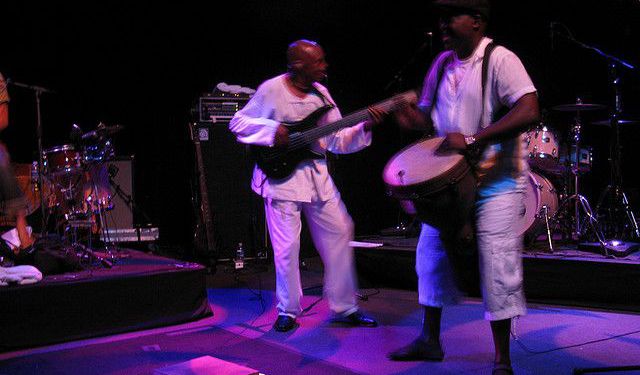 Image by thisisbossi on Flickr under Creative Commons License.

Washington D.C. offers a great nightlife. You can dance all night long in any of the clubs from its liveliest neighborhoods, playing rock, hip hop, punk, jazz, country, gospel or alternative music. Make sure not to miss such an exciting opportunity by checking out the tour below with the suggested music and dance clubs.
How it works: Download the app "GPSmyCity: Walks in 1K+ Cities" from iTunes App Store or Google Play to your mobile phone or tablet. The app turns your mobile device into a personal tour guide and its built-in GPS navigation functions guide you from one tour stop to next. The app works offline, so no data plan is needed when traveling abroad.

A former 19th century lumber warehouse, Avenue has become a trendy, stylish and hip dance club. The music includes hip hop, '80s classics, reggae and jazz. It is a four level lounge and its exposed brick walls, candle-lit nooks and plush decor blend to create an exclusive ambiance for a chic night of lounging and dancing.
Image by AgnosticPreachersKid on Wikimedia under Creative Commons License.
2

This is a modern Indian cuisine restaurant that conveys the sense of an older, more regal India. Its artwork brightens the place, which is divided into several dining areas and a central modern bar-lounge. The menu includes Sigri (open Barbeque), Tawa (Griddle), Tandoori and regional dishes.
Image by Joe Barcelo on Flickr under Creative Commons License.
3

This top-notch two-story lounge club is so exclusive that it neither advertises nor dispalys its name on the door. Among its patrons are big-time politicians, celebrity locals and with-it visitants who uphold the high-brow tradition set by the former Prez. Known as ESL, bouncers keep vigil outside, making sure no jeans/trainers-clad folk get inside and disturb the ambiance with glamorous females clad in Prada, Dolce and Versace lying back on the couches and enjoying their negronis, whilst rakish men in Armani puff imported cigars over bourbon on the rocks. Music "cocktails" masterly mixed by in-house DJs fill up the atmosphere with powerful and seductive energy, carried by hot urban tunes and boogie, inciting some of the guests to take to the dance floor.

Image by dollop on Flickr under Creative Commons License.
4

Dine on New American cuisine in a charming restaurant, located in one of D.C.'s oldest Victorian style hotels. The menu reflects global influences with a regional twist, using the highest quality ingredients. You will be pleasantly surprised by the engaging appetizers, aromatic sauces and the great quality of seafood, meat and poultry entrees.
Image by Mack Male on Flickr under Creative Commons License.
5

Black Cat is a venue for live independent and alternative music, featuring local, national and international artists. You can experience indie rock, metal, punk and electronic music, as well as DJ/dance nights. On the first floor you will find the bar/lounge called the Red Room, and the Food For Thought cafe. It serves mainly vegetarian food, along with some meat and vegan dishes.
Image by Alex Barth on Flickr under Creative Commons License.
6

Founded in 1958 by Ben Ali, it became a landmark restaurant in the city. It is famous locally for its French fries, chili dogs, half-smokes, and milkshakes. It also serves some healthier options like vegetarian chili and veggie burgers. The restaurant is the favorite eating place in DC for Bill Cosby and Chris Tucker.
Image by Ben Schumin on Wikimedia under Creative Commons License.
7

Nightclub 9:30 (originally known and still commonly referred to as the 9:30 Club) is a nightclub and concert venue in Washington, D.C. Originally located at 930 F Street, NW, Washington, D.C., in the 1970s it was called the "Atlantis Club", and hosted primarily rock, New Wave, and punk bands. After the Atlantis closed, in 1980 the venue reopened as the 9:30 Club, the name reflecting its address. Co-owned by Rich Heinecke and Seth Hurwitz, it later moved to its current location at 815 V Street in Northwest Washington. The 9:30 Club is served by the U Street/African-American Civil War Memorial/Cardozo station of the Washington Metro. The club has a capacity of 1200 people and is a standing-only venue. It won the Top Club award at the 2007 and 2009 Billboard Touring Awards.
Image by thisisbossi on Flickr under Creative Commons License.
Sight description based on wikipedia

If you are looking for getaway spots from the hustle and bustle of politics and city life, this walking tour in Washington D.C. offers plenty of opportunities for that. There are many large parks and gorgeous gardens where you can admire beautiful flowers, landscape and even learn various historical facts.