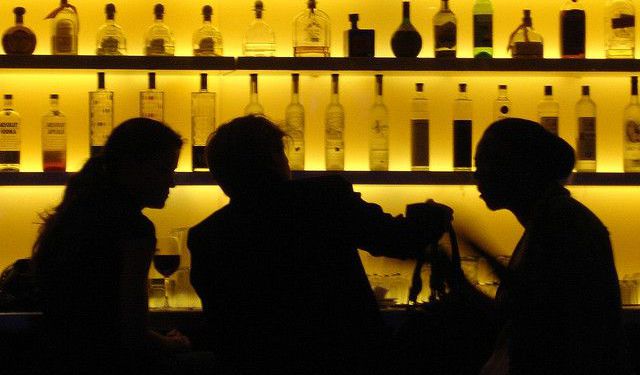 Image by glennharper on Flickr under Creative Commons License.

Night life in Pasadena is rich and diverse. If you are a sports fan, you can watch a match with your friends and have some cold beer in a pub. There are places where you can dance all night long. Or you can choose a quiet location to go for a date. Follow this colorful night trip and you will discover places where you could spend unforgettable moments.
How it works: Download the app "GPSmyCity: Walks in 1K+ Cities" from iTunes App Store or Google Play to your mobile phone or tablet. The app turns your mobile device into a personal tour guide and its built-in GPS navigation functions guide you from one tour stop to next. The app works offline, so no data plan is needed when traveling abroad.

Old Towne Pub LLC is a dive bar situated in downtown Pasadena. This is a place to go with your friends. There is always a live band playing in the background, mostly cover songs of the famous bands. The bar in this location offers good yet inexpensive drinks. In the back of the building you can get some fresh air and enjoy the architecture of the Old Town.
Image by brightmillion on Flickr under Creative Commons License.
2

35er is a sports bar situated on the historic US Route 66 in Old Town Pasadena. Since 1963 it gathers many sports fans. This is a place where you relax from a hard day of work. The location also has pool tables, jukeboxes, a full bar and big screen TVs where you can watch your favorite sporting events.
Image by claimsmantoo on Flickr under Creative Commons License.
3

Vertical Wine Bistro is a lounge where you can come late at night with your friends and enjoy the flavor of your favorite wine. The building inside has a modern arrangement, painted in neutral blue and gray colors. The lounge area has comfortable couches. All these factors create a cozy atmosphere. The location is famous for its fantastic wines and endless selections.
Image by oktobergirl on Flickr under Creative Commons License.
4

Bodega Wine Bar is a great place to come for a date or with your friends. Inside the building, it is a little bit dark and there is great-sounding, relaxing music, which creates a cool atmosphere. The location has a collection of good wines and beer and serves delicious food.
Image by pravin.premkumar on Flickr under Creative Commons License.
5

The Ice House Comedy Club is located at 24 Mentor Avenue in Pasadena, California. It opened in 1960 when folk music was in its prime. The Ice House was one of America's top folk clubs with acts coming from all around the country. In the 1970s, the club's emphasis switched to comedy, providing an intimate setting where all seats are within seven rows of the stage. Among those who have recorded some of the more than 75 live albums at the club are the Smothers Brothers, Gallagher, Lily Tomlin, Pat Paulsen and George Lopez. Other comedians who have performed at the club include: Bob Newhart, George Carlin, Robin Williams, David Letterman, Jim Carrey, Jay Leno, Dennis Miller and others.
Image by Fran and Rowena on Flickr under Creative Commons License.
Sight description based on wikipedia

Pasadena has many interesting places for a sweet childhood. The city has a lot of desert specialized shops, rich kids’ cloth boutiques and last but not least, groovy parks and playgrounds. This fascinating guide will take you and your children into an exciting wonderland.

Places of Worship Tour in Pasadena

Pasadena can be called the city of churches. The buildings are designed in various styles and thus give a distinctive characteristic feature to the city. Here you can find almost any type of religion, confession and sanctuary. Follow this guide and visit these sacred places and you will be delighted and excited by their beauty.

Pasadena is a city rich in cultural venues, monuments, museums and churches. The downtown is a green area with many great places of national and international importance. Don't hesitate to spend a few hours touring this part of the city.

Museum and Galleries Tour in Pasadena

Like many other cities in the United States and in the world, Pasadena has a variety of architectural styles and building designs. Well known architects and designers created a paramount work which we can enjoy today. Spend a few hours touring the amazing masterpieces this beautiful city is ready to show you.