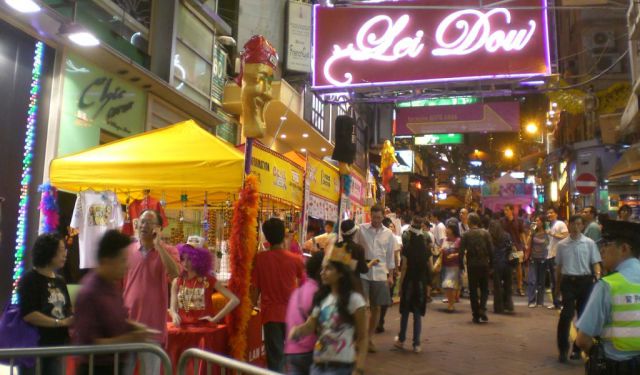 Image by GoT2008 on Wikimedia under Creative Commons License.

Being a global metropolis, a financial and cultural center, Hong Kong also offers a bewilderingly varied nightlife to its visitors. It has posh nightclubs, soft lounges, bars, pubs and cafes, all of them ready to be tried out. The next self-guided tour proposes that you take in some of the nightlife spots in the Central district of Hong Kong, featuring discos and bars and the well known bunch of clubs in the Lan Kwai Fong square.
How it works: Download the app "GPSmyCity: Walks in 1K+ Cities" from iTunes App Store or Google Play to your mobile phone or tablet. The app turns your mobile device into a personal tour guide and its built-in GPS navigation functions guide you from one tour stop to next. The app works offline, so no data plan is needed when traveling abroad.

Lan Kwai Fong is located in the Central district of Hong Kong Island. This is a small square of streets which is a popular tourist area in Hong Kong for dining, drinking and clubbing. Originally this area had been dedicated to hawkers before World War II but during the mid-1980s, it underwent a renaissance. The street is L-shaped, and its 2 ends join D'Aguilar Street.

During the early days, Lan Kwai Fong square had housed many mui yan or marriage arrangers. This was a role that was exclusively held by women. This is the reason it was called Mui Yan Hong or Hong Leung Hong (medium person lane).

During the 1970s Allan Zeman moved to Hong Kong. He was a German-Canadian businessman, and he felt that the area needed a more western style restaurant. This is why in 1983 he opened “California” in Lan Kwai Fong. After the success of his restaurant, Allan Zeman invested 32 million Dollars (HK Dollars) to purchase an entire block in the area and made many entertainment destinations for tourists as well as expatriates. The street became so well known after this that he is actually referred to as “The Father of Lan Kwai Fong”.

Why You Should Visit:
One of the best places in the world for bar hopping, club hopping all night, every day. Hongkongers and tourists flock here for the nightlife, and bouncers will be inviting you into their bar.

Tip:
Go early (before 9 pm) and you can enjoy food & drinks at very reasonable prices.


Image by ** rosa ** on Flickr under Creative Commons License.
Sight description based on wikipedia
2

Volar Nightclub is recognized as one of the most chic and sophisticated new clubs of the Lan Kwai Fong area. It has a futuristic design and is always full of stylish young people. The Club has actually two different spaces, one with a bar and nightclub, the other being a lounge room.
Image by Dana Beveridge on Flickr under Creative Commons License.
3

Solas Bar and Lounge is famous for having really friendly owners, spacious interiors and a stylized lighting. It is a newly opened club, known for its stylish interior and its wide line of cocktails.
Image by ambernambrose on Flickr under Creative Commons License.
4

PLAY Club is to be found within California Tower on D'Aguilar Street. The club has futuristic theme interiors, with a mix of purple and dark colors. It offers a wide line of cocktails and there is also a large dancing space. Thursdays and Saturdays are hip hop days.
Image by mountainhiker on Flickr under Creative Commons License.
5

A bar restaurant with gorgeous interiors, great lighting and relaxing atmosphere, MO Bar is the place anyone would like to check out (dressed properly, of course). Located within the Landmark Mandarin Oriental Hotel, it plays host to a stylish clientèle, and offers snacks, drinks and international cuisine.
Image by Salim Virji on Flickr under Creative Commons License.