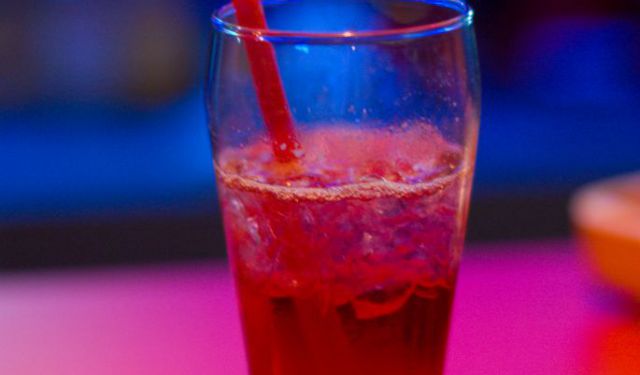 Image by misterhonk_de on Flickr under Creative Commons License.

As a student's city, New Haven combines all types of nightly entertainment, from cozy and stylish lounges to great live music venues and clubs that contribute to the history of music. Discos, great cocktails, fresh beer, pool tables and everything else you need await you in the following tour.
How it works: Download the app "GPSmyCity: Walks in 1K+ Cities" from iTunes App Store or Google Play to your mobile phone or tablet. The app turns your mobile device into a personal tour guide and its built-in GPS navigation functions guide you from one tour stop to next. The app works offline, so no data plan is needed when traveling abroad.

Cafe Nine is a live music venue, offering live music concerts and a variety of drinks every evening. The music genre varies from acoustic to garage, jazz or folk. The place is considered New Haven's home, as the majority of live concerts take place here. It is also famous as a tiny supporter of the New Haven local scene. The shows at Cafe Nine usually start at 8 or 9 PM.
Image by Christopher Zurcher, Zurcher Communications on Flickr under Creative Commons License.
2

Firehouse 12 is an original club with live music and a bar. The bar serves classic cocktails, selected wines and New Haven's finest specialty beers. Firehouse 12 is also the perfect place to watch a live performance, as it hosts a variety of instrumental performances and not only concerts. Firehouse 12 is one of the finest places in New Haven to watch a great show and enjoy it. The bar's operating hours are: Tuesdays to Thursdays - 4 pm- 12 am, Fridays 4 pm-2 am; Saturdays 6 pm- 2 am and Sundays 6 pm- 12 am.
Image by Kyle Bradley under Creative Commons License.
3

116 Crown is a cozy bar in New Haven with a unique design, creating a comfortable atmosphere where friends gather. The bar has a great menu offering a variety of drinks and food. 116 Crown is one of the finest and most stylish places in New Haven to meet your friends. The place is open Tuesdays-Thursdays from 4:30 pm to 12 am; Fridays-Saturdays from 4:30 pm to 1 am and Sundays 4:30 pm- 11 pm.
Image by Dennis Mojado on Wikimedia under Creative Commons License.
4

The BAR is a place that opened in New Haven in 1991. The bar looks more like a tavern than a disco bar. Originally it had three rooms, each having its own specific atmosphere. The bar features pool tables and wide-screen TVs. The BAR is famous for offering freshly micro-brewed beer and a variety of pizzas, all of them served in a great atmosphere. It is open Mon, Tue: 4 pm-1 am; Wed, Thu: 11:30 am- 2:30 pm/ 4 pm- 1 am; Fri, Sat: 11:30 am- 2 am and Sun til 1 am.
Image by llimllib on Flickr under Creative Commons License.
5

Toad's Place is a concert venue and nightclub in New Haven, with two other short lived locations in Waterbury, CT and Richmond, VA. The building, located on York Street down the street from Ashley's_Ice_Cream and Blue State Coffee and across an alley from Mory's Temple Bar, was the original location of the Yale Co-op.

During the 1960s, it was a popular restaurant called Hungry Charlie's and then the location of Caleb's Tavern. In 1974, Michael Spoerndle, formerly a student at the Culinary Institute of America, rented the building for a French and Italian restaurant, which opened in March 1975. He named it Toad's Place, after a childhood joke. He said, "When my parents were going out to dinner, they would tell me they were going to such-and-such, and I thought it would be funny if they said, 'We're going to Toad's Place.' Plus, people who didn't go out and stayed at home, we'd call them 'toads.' It was the equivalent of a couch potato." In 1976, Spoerndle turned the restaurant into a live music venue, working with a local musician named Peter Menta to bring in bands. Willie Dixon, Muddy Waters, John Lee Hooker and Koko Taylor were some of the first performers. In 1976, Brian Phelps joined as manager and eventually co-owner. Phelps took control in 1995, after Spoerndle's numerous problems with alcohol and drug addiction.