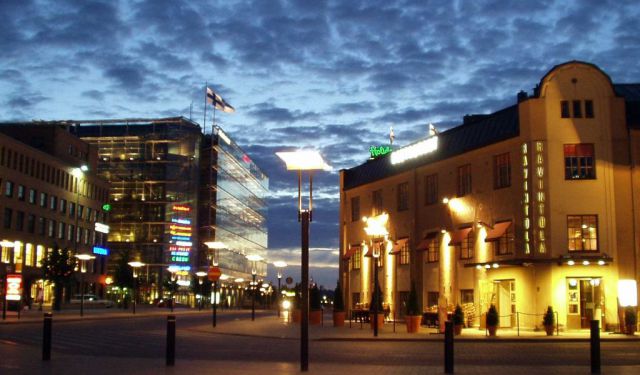 Image by Marcela on Wikimedia under Creative Commons License.

Most of Helsinki's nightlife is concentrated in the center of the city around the main train station. Almost all the establishments are a mix of bar, disco and concert venue. Finnish people are great lovers of live performances. No matter what band or artist is playing, they always enjoy the show. So, take this tour to experience the vibrant nightlife of Helsinki.
How it works: Download the app "GPSmyCity: Walks in 1K+ Cities" from iTunes App Store or Google Play to your mobile phone or tablet. The app turns your mobile device into a personal tour guide and its built-in GPS navigation functions guide you from one tour stop to next. The app works offline, so no data plan is needed when traveling abroad.

The Tavastia Club is a popular rock music club in Helsinki. The club was built in 1931. From early on, it was actively rented for entertainment purposes, including plays and dances. By the 1980s the club had achieved a legendary status in the Finnish rock music scene. The 1990s saw a number of popular new domestic acts rise to fame from the stages of the club. These include Don Huonot, Kingston Wall and The 69 Eyes. In 1994 a "little brother" club named Semifinal was opened in the basement of Tavastia to serve and as venue for "rising star" bands and other smaller acts. For example, HIM first played at Tavastia's Semifinal club when Ville Valo, the lead-singer to be, was still playing bass. Valo is said to have told Tavastia's manager Juhani Merimaa that he would one day play a sold-out gig in the upstairs club – a promise that he did indeed keep.
Image by JIP on Wikimedia under Creative Commons License.
Sight description based on wikipedia
2

On the Rocks is a rock club in downtown Helsinki next to the main railway station. The club has cave-theme-based decorations and a big stage where live rock concerts are held 5-7 times a week. Every evening the DJs play classics and the best new rock. Rock parties continue every night until 4 in the morning. Outside there is a street bar where you can enjoy a drink while resting from the party inside.
Image by mandrl on Flickr under Creative Commons License.
3

Molly Malone's Irish Pub is listed as one of the top 50 Irish pubs in Europe. Molly Malone's has two floors, three bars and a skilled staff that will make your visit unforgettable. Kitty, Molly and June are the names of the three bars and are usually called "The Wild Girls” by locals. Here you can listen to high-quality live Irish music seven days a week and enjoy a pint of real Irish beer.
Image by Näystin on Flickr under Creative Commons License.
4

Kaarle XII, also called "Kalle," has been one of the biggest and most popular nightclubs in Helsinki since 1976. The venue features six bars, three bars on each floor. All six bars serve delicious dishes and a wide variety of drinks. Downstairs the music is mainly Finnish pop, and upstairs you can dance to top international hits. There is a lot of seating space, as well as dance areas. Their professional bartenders mix even the most demanding drinks and cocktails. They also have very large selections of beer, cider, cognac, whiskey and quality cigars.
Image by Mahlum on Wikimedia under Creative Commons License.
5

DTM was one of Finland's first gay clubs. Today it is considered to be the biggest in Scandinavia and has the hottest dance floors in town. DTM organizes a variety of performances, drag shows and bubbling foam parties. The club is open Wednesday through Sunday from 10 pm to 5 am. The upstairs disco is open every weekend and during special events.
Image by wili_hybrid on Flickr under Creative Commons License.
6

Opened in 1998, Mann's Street is a cozy downtown meeting place for gay men, where you can drop by in the afternoon or evening and spend the whole night singing until the sun rises. Sunday to Thursday are the most popular karaoke nights. One night per week is organized as a dancing night, which means you have to get involved in the so-called “Mann's Street barn dances.”
Image by kwc909 on Flickr under Creative Commons License.
7

Nosturi (Finnish for crane) is a culture and music hall, as well as a nightclub, located in the Punavuori district of Helsinki. It is owned by the Association of Live Music (Elävän musiikin yhdistys, ELMU). The hall is located at the seaside in Hietalahti next to the Helsinki New Shipyard in an old cargo terminal building. It gets its name from the old crane (Hietalahti crane number 6) located right next to it. Many popular live music festivals are held at Nosturi throughout the year. The ELMU has had its premises in Nosturi since 1999. Before that it operated in the legendary Lepakko nearby.
Image by Ppntori on Wikimedia under Creative Commons License.
Sight description based on wikipedia

As the capital of Finland and one of the major cities of Scandinavia, Helsinki has a great and interesting history. The city is full of sculptures and monuments dedicated to some of the most important people and events in its history. This self-guided tour will help you visit some of Helsinki's greatest landmarks.