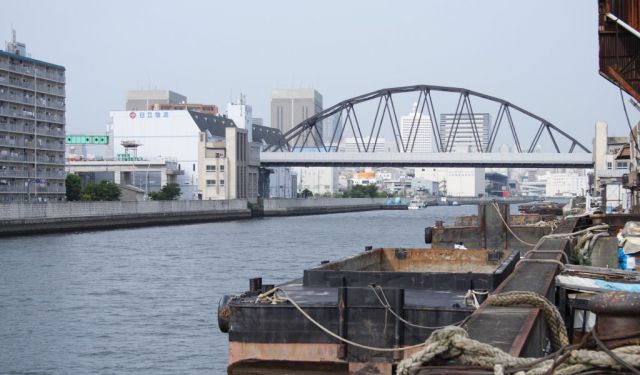 Image by ignis on Wikimedia under Creative Commons License.

Located in west central Osaka, Nishi-ku is one of the 24 wards of the city. It is home to a number of interesting tourist attractions, including museums, temples and shrines. Take our Nishi-ku walk to see the beautiful sights of the district.
How it works: Download the app "GPSmyCity: Walks in 1K+ Cities" from iTunes App Store or Google Play to your mobile phone or tablet. The app turns your mobile device into a personal tour guide and its built-in GPS navigation functions guide you from one tour stop to next. The app works offline, so no data plan is needed when traveling abroad.

The Tamatsukuri Inari Shrine is a Shinto shrine in Osaka dedicated to the deity or Kami, Inari. It is an ancient place of worship and celebrated the 2000th anniversary of its foundation in 1989.

The Tamatsukuri Inari Shrine is said to have been founded in 12 B.C. by Emperor Suinin. At the time the hill near the shrine were called the Tamatsukuri-oka or Hill of gem making where a group of artisans who made comma shaped gems resided. It is from the hill that the shrine gets its name. In the 1580s, Hideyoshi Toyotomi enshrined the deity Inari here to protect Osaka Castle. The Toyotomi family held tea ceremonies here and they were served by the eminent tea ceremony expert, Sen-no-Rikyu. The original shrine was destroyed by fire and battles and was completely destroyed by the bombardment during World War II. The present building was constructed in 1954 funded by contributions of worshippers.

The main deity enshrined in the Tamatsukuri Inari Shrine is Ukanomitama-no-ôkami. He is the God of abundant harvest and food. Of the ancient shrine, a gate constructed by the Toyotomi family survives to this day. There is also a monument commemorating Sen-no-rikyu and the Naniwa Tamatsukuri Gem Museum with displays dedicated to the art of gem making and gem processing is located within the temple complex.

Image by nnh on Wikimedia under Creative Commons License.
2

2) Grand Cathedral of the Virgin Mary of Osaka

The Grand Cathedral of the Virgin Mary is the seat of the Catholic Archbishop of Osaka. At present there are 1300 Japanese parishioners and 300 international parishioners.

St. Francis Xavier, a well known Jesuit missionary arrived in Japan in the year 1549 and spread the Christian religion across Japan. In 1894 the cathedral of St. Agnes was built in Tamatsukuri, Osaka. In 1945, it was razed to the ground by the bombardments of World War II. In 1949, the Cathedral of Saint Francis Xavier was built on the site to commemorate the 400th anniversary of the arrival of the Jesuits in Japan. The present Cathedral of the Virgin Mary dates back to 1963 and covers an area of 2,450 square meters.

The Cathedral of the Virgin Mary has a distinctive blue tiled façade and a white stone statue of the Holy Virgin. On the Northwest of the cathedral is a well called the Ecchu-I that was once the site of a palace belonging to the Warlord, Hosokawa Ecchu-no-kami Tadaoki. A wooden post nearby contains a farewell poem written by him in honor of his Christian wife, Lady Gracia ( Garashia ) Hosokawa. Her statue is located on the right in front of the church. The other statue on the left is of the Samurai Ukon Takayama who was banished to the Philippines for his Christian beliefs. The interiors are covered with religious paintings illuminated by light filtering through beautiful stained glass windows.

The Hokoku Shrine is located in the Osaka Castle Park to the south of the Castle Keep or Hommaru. Three members of the Toyotomi family are enshrined here and worshipped as the Deities of success and good luck.

After the defeat of the Tokugawa Shogunate, the Meiji Emperor commissioned the erection of two shrines in honor of Toyotomi Hideyoshi who was responsible for the unification of Japan. The main Hokoku Shrine was built in Kyoto and a branch was constructed in Nakanoshima Azayamazaki-no-Hana in Osaka. It was moved to its present location in 1961 and the Osaka central Public Hall was built on its former site.

The Hokoku Shrine is dedicated to Hideyoshi, Hideyori and Hidenga Toyotomi. A large statue of Hideyoshi is located here. The garden laid in 1972 has an ocean theme because locals believe that the reason for the prosperity of Osaka was seafaring and maritime trade. It has the shape of a horse that was the emblem of Hideyoshi with large stones to represent an Ishiyama or Stone Mountain. Worshippers come here to obtain an amulet called Sennari-hyotan which is said to give them success and luck because the enshrined deity Hideyoshi, who started off as a low ranking soldier, later became one of Japan’s most successful leaders.
Image by KENPEI on Wikimedia under Creative Commons License.
4

The Entrepreneurial Museum is dedicated to 107 entrepreneurs whose innovative ideas and management skills gave job opportunities to people in the city and helped Osaka remain prosperous after World War II. It was founded to commemorate the 102nd anniversary of the Osaka Chamber of Commerce and Industry.

The Entrepreneurial Museum is located in the basement of the Business Innovation Center by the Osaka Chamber of Commerce and Industry in 2006. The purpose was to teach future generations the importance of entrepreneurship and channelizing human resources through memorabilia and personal items belonging to these enterprising men. Among industrialists featured are the founders of the Matsushita Industrial Electrical Co that manufacture Panasonic electronic products and Nisshin Shokuhin Co ltd that manufactured the first instant noodles.

The Entrepreneurial Museum is divided into chronologically arranged sections dedicated to each period of industrial advancement in Osaka and introduces the entrepreneurs who played an important role at the time. The birth of Modern Osaka, the formation of a consumer society in the city and the creation of an abundant society from postwar reconstruction to prosperity are the main sections of the museum. Visitors can learn of the challenges posed to these entrepreneurs and the steps they took to overcome them to help the people of Osaka enjoy their present day affluent lifestyle through video presentations and panel displays.
Image by 本屋 on Wikimedia under Creative Commons License.
5

The Shinshu-otani-ha Namba Betsuin also called the Minami-mido was the main temple of the Shinshu Otani branch of Zen Buddhism until the construction of Higashi Hoganji temple was constructed in Kyoto. Its location is Chuo-ku in Osaka City.

The Minami-mido temple was established in Watanabe in 1595 by the 12th Kyonyo Shonin. It was relocated to its present site in 1598. When the Tokugawa Shogun Leyasu gave the Shinsu Otani sect a large piece of land in Kyoto to build a temple, the Higashi Hoganji temple was constructed in 1602 and the Minami-mido ceased to be the principal temple of the sect. The temple was completely destroyed by the bombardments during World War II in 1945 and rebuilt in 1961.

The present Minami-mido Temple is a recent construction. The only surviving objects from the original building are the statue of the main God, the Amida Buddha and a granite statue of Shinran, the founder of the sect. A new temple gate and main hall where the main Deity was reinstalled were completed in 1961. There is also a small monument in the grounds inscribed with the last poem of the well known Haiku poet, Basho Matsuo. The temple stays open every day between 9.00 am to 2.30 pm.
Image by Jurema Oliveira on Wikimedia under Creative Commons License.
6

The Mittera Temple is a Buddhist temple dedicated to the Bodhisattva Kannon. It was built by a local Buddhist Monk called Gyoki.

The Mittera Temple was commissioned by the Emperor Shomu and constructed by Gyoki in the year 744. Gyoki was said to have been born in the Mittera or Namba area of Osaka. The original Kannon statue was carved by him using wood from an ancient camphor tree that grew nearby. It is located on a busy avenue of the city called the Midosuji Avenue. The first Osaka Prefectural Assembly was held in the main hall of the temple in 1879.

The Mittera temple is one of the few temples that escaped being destroyed by the 1945 World War II bombardments. The present temple is not the original one built by Gyoki but a structure that was constructed in 1808. It now enshrines a statue of Kannon with eleven heads carved from a camphor tree that grew on the temple grounds. The tree was cut down for the expansion of Midosuji Avenue. The main hall is completely covered with gilded lacquer and has pillars, doors and panels painted with floral patterns. The living quarters of the monks called the Kuri faces the Midosuji Avenue. It is a modern structure made of ferroconcrete with an exterior that preserves the traditional appearance of a Kuri.
Image by twicepix on Flickr under Creative Commons License.