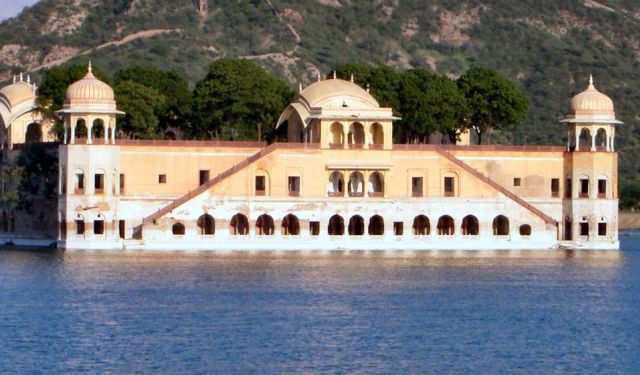 There is much to admire in the beautiful city of Jaipur, and the northern area is particularly picturesque. Set on a lake, it is a truly beautiful district with monuments and gardens that are a treat to the senses. The mountains to the north complete the area’s scenic landscape. Take our tour to see the best sights in Northern Jaipur.
How it works: Download the app "GPSmyCity: Walks in 1K+ Cities" from iTunes App Store or Google Play to your mobile phone or tablet. The app turns your mobile device into a personal tour guide and its built-in GPS navigation functions guide you from one tour stop to next. The app works offline, so no data plan is needed when traveling abroad.

The Hindu temple Govind Deo Ji is located in the City Palace complex. The temple is dedicated to Govind Deo Ji (Lord Krishna). The image of the deity (murti) was brought from Vrindavan here by Raja Sawai Jai Singh II, the founder of Jaipur. According to popular legend, Lord Krishna's image in the temple looks exactly like Krishna's form during his incarnation on Earth. For Vaishnavites, particularly followers of Lord Krishna, this is one of the most important temples outside Vrindavan. Thousands of devotees visit the temple daily and even larger number visit during Janmashtami.

Image by Knowledge Seeker on Wikimedia under Creative Commons License.
Sight description based on wikipedia
2

The Royal Gaitor is a wonderful palace set in a beautiful valley at the foot of a mountain. Its white marble exterior gives it a very majestic appearance. Look out for several important tombs that speak to the grandeur of Jaipur’s past. Maharaja Jai Singh II Chhatri’s tomb and the huge tomb of Sawai Jai Singhji Chhatri are both located here.
Image by Politvs on Wikimedia under Creative Commons License.
3

The Amber Road area is a wonderful place to shop for antiques, blue pottery, handicrafts, jewelry and souvenirs. You can find many brilliant gifts to take home at the many showrooms along this road. Look out for the delightful glazed blue pottery at Jaipur Blue Pottery Art Center, including all sorts of pots, mugs and jugs. Originating from Persian artisans, this type of pottery has become a hallmark of this region of India.
Image by chamko rani on Flickr under Creative Commons License.
4

Kanak Ghati is a beautiful garden near the lake on the outskirts of Jaipur. You can stroll around the beautiful fountain and ponds here, and visit several magnificent temples that pay testament to the quality of Indian architecture.
Image by Os Rúpias on Flickr under Creative Commons License.
5

Jal Mahal (meaning "Water Palace") is a palace located in the middle of the Man Sagar Lake in Jaipur city. The palace and the lake around it were renovated and enlarged in the 18th century by Maharaja Jai Singh II of Amber. The Jal Mahal palace has got an eye-popping makeover. Traditional boat-makers from Vrindavan have crafted the Rajput style wooden boats. A gentle splashing of oars on the clear lake waters takes you to Jal Mahal. You move past decorated hallways and chambers on the first floor to climb all the way up to the fragrant Chameli Bagh. Across the lake, you can view the Aravalli hills, dotted with temples and ancient forts, and on the other side, bustling Jaipur.

The most remarkable change is in the lake itself. The drains were diverted, two million tonnes of toxic silt were dredged from the bottom, increasing its depth by over a metre, a water treatment system was developed, local vegetation and fish reintroduced, the surrounding wetlands regenerated and five nesting islands created to attract migratory birds.

Image by Poco a poco on Wikimedia under Creative Commons License.
Sight description based on wikipedia
6

The Kanak Vrindavan Valley is an exotic garden located at the foot of Nahargarh hills. Here you can see a complex of dome-roofed temples with statues of Krishna. The area is named after the mythological Vrindavan, or land of Lord Krishna, because of the valley’s heavenly beauty. This picturesque spot also offers breathtaking panoramic views of the top sights of the city.
Image by xiquinhosilva on Flickr under Creative Commons License.