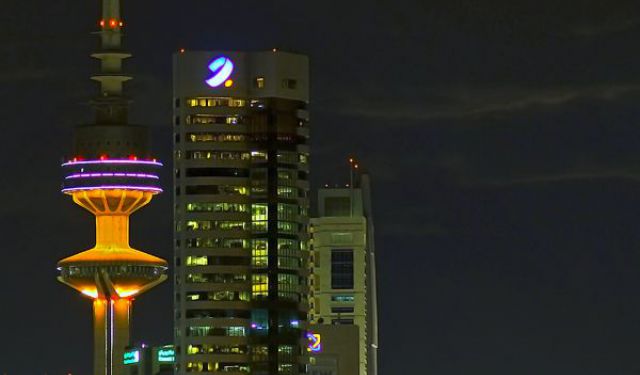 Kuwait City is a wonderful, modern and rich city. Many of its attractions are modern towers and buildings. There are several must-see landmarks in the northern part of the city. Take this self-guided tour to explore the sites in this part of Kuwait City.
How it works: Download the app "GPSmyCity: Walks in 1K+ Cities" from iTunes App Store or Google Play to your mobile phone or tablet. The app turns your mobile device into a personal tour guide and its built-in GPS navigation functions guide you from one tour stop to next. The app works offline, so no data plan is needed when traveling abroad.

Sea Bridge is located on the beach of Kuwait, not far from the famous Kuwait Towers. The bridge offers an amazing view of the towers and the sea. It is a long bridge that goes far into the sea and is a great place to take a walk. At night it is illuminated and is especially beautiful.
Image by radiant guy on Flickr under Creative Commons License.
2

The Kuwait Towers are a group of three slender towers in Kuwait City, standing on a promontory into the Persian Gulf. They were officially inaugurated on 26 February 1977 and are rated as a landmark and symbol of modern Kuwait. These three towers serve as water reservoirs. There is an observation deck with restaurants that offer a wonderful view of the city. The towers are thin and high with several spheres. They are especially beautiful at night, when they are illuminated. The main tower is 187 meters (613.5 ft) high and carries two spheres. The lower sphere holds in its bottom half a water tank of 4,500 cubic meters and in its upper half a restaurant for 90 persons, a cafe, a lounge and a reception hall. The upper sphere, which rises to 123 meters above sea level and completes a full turn every 30 minutes, holds a cafe. The second tower is 147 meters high and serves as a water tower. The third tower houses equipment to illuminate the two larger towers. The towers hold 9,000 cubic meters of water altogether. Although there are three towers, the structure is often referred to as Kuwait Tower in singular.
Image by Scott Stimeare on Wikimedia under Creative Commons License.
Sight description based on wikipedia
3

Aqua Park is a fantastic amusement park in Kuwait City on Gulf Road, where the main attractions and the most prominent landmarks of the city are located. It has many water rides and is a place for joy and recreation. It is important for tourists to know that on Tuesdays only women are allowed in the park. The park also has several cafes.
Image by Third Eye on Wikimedia under Creative Commons License.
4

One of Kuwait City’s skyscrapers, Al Babtain Tower, also called Waqf Tower, has a unique and interesting shape. Built recently, Al Babtain is the name of its owner.
Image by Minnesota National Guard on Flickr under Creative Commons License.
5

The Kuwait United Tower is a beautiful modern skyscraper of an unusual form that contributes to the cityscape of Kuwait. This unique tower is a masterpiece in architecture. People say that one can touch the clouds from there as it is the second highest tower in Kuwait City.
Image by Mohdalg on Wikimedia under Creative Commons License.
6

The Shia Shrine, in the center of Kuwait City, is located near Al Hamra Tower. Shia Muslims share fundamental beliefs with other Muslims, but recognize the authority of the Imams, the descendants of Muhammad.
Image by Farid al-Din on Wikimedia under Creative Commons License.

Kuwait City culture can be seen in its art and handicrafts. Many of the city’s museums and cultural centers are located on Gulf Road. The National Museum reflects the history and development of this wealthy country. There are also interesting museums set in houses displaying Bedouin art. Check out the most famous cultural spots in Kuwait City on this self-guided tour.

Kuwait City is a wealthy city, rich in oil reserves, located on the shore of the Persian Gulf. Arabs and Sunni Muslims live here. The locals are rather tolerant of westerners. Take this self-guided tour for a closer acquaintance with the everyday life of the city.