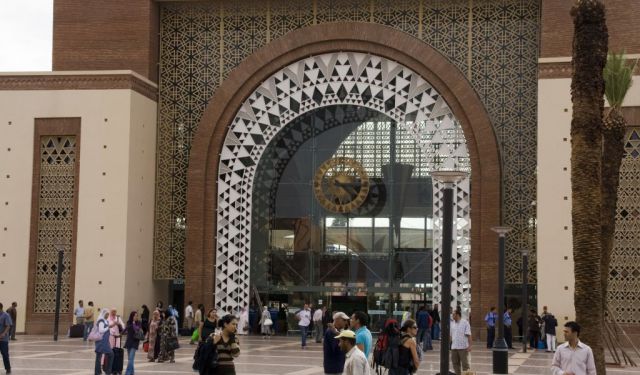 Image by Jacmin on Wikimedia under Creative Commons License.

Since 1985 the Medina of Marrakech has been listed as a UNESCO World Heritage Site. Walk the narrow streets and discover the best of cultural, historic, and religious sights in the north part of Medina. Take the time to explore the Dar Si Said and learn about Morocco's art. And of course don't hesitate to enjoy all the souks and shops along your journey. Just take the North Medina Walking Tour in Marrakech.
How it works: Download the app "GPSmyCity: Walks in 1K+ Cities" from iTunes App Store or Google Play to your mobile phone or tablet. The app turns your mobile device into a personal tour guide and its built-in GPS navigation functions guide you from one tour stop to next. The app works offline, so no data plan is needed when traveling abroad.

1) Royal Palace of Marrakech (must see)

The Royal Palace in Marrakech is not open to the public, but it is worthwhile going to see if you can take a photo of one of the members of the royal family or foreign presidents going in or out of its elaborate entrance.

It is perhaps the largest palace in the country and has been used as winter quarters by royal families for centuries. It is an enclave within the medina – or a city within the city.

The first palace was built after the Almohad tribe won the city in 1147 following many years of battles against the ruling Almoravides, who had made Marrakech their capital city. When the Almohad Dynasty was installed they pulled down almost all the buildings constructed by their rivals and built the Kasbah within the city walls.

Part of the Kasbah housed military and administrative staff, but most of it was given over to the royal quarters where the sultan lived and housed his harem. The Almohad Dynasty was succeeded by the Marinid Dynasty in 1269 and they enlarged the palace.

The Marinids were succeeded by the Wattasid’s in 1472 who were defeated by the Saadis in 1554. In 1666 the Alaouite Dynasty was installed and their descendants rule Morocco today.

During this time, although most of the buildings in the medina were either destroyed or pulled down so that each dynasty could stamp its name on the city, the palace was simply enlarged and renovated.

Today the capital of Morocco is Rabat, but this hasn’t diminished the importance of the Royal Palace in Marrakech. In 1989 the Unification Treaty of the Arab Maghreb and in 1994 the GATT contracts were signed here.


Image by Ian Swithinbank on Flickr under Creative Commons License.
2

Marrakech is often very hot and dusty and is always busy and noisy and after a while it’s necessary to escape and relax somewhere calm. Agdal Gardens is an excellent place for this.

The gardens cover an area of 400 hectares to the south of the Royal Palace. Agdal means walled meadow in Berber and the gardens have a pisé wall around them.

They were founded in 1157 as a private orchard for Sultan Abd al-Mu’min. They were renovated and enlarged in the 19th century during the Saadian Dynasty, which was when the wall was erected.

The oblong plots are full of apricot, fig, lemon, orange and pomegranate trees, linked by paths lined with olive trees.

There are several ponds and the whole area is irrigated by khettera – which are ingenious underground channels that bring water from the Ourika Valley in the High Atlas Mountains.

The largest pool is called the “Tank of Health” and was once used for teaching soldiers how to swim. Beside this pool you will see the minzah Dar el Hana, where various sultans would spend a few days during the summer months to escape the heat of the city. Another pavilion in the gardens is the Dar al Baida, which housed the sultan’s harem.
Image by Jerzy Strzelecki on Wikimedia under Creative Commons License.
3

The ramparts of Marrakech encircle the medina, or old town, and stretch for 19km. There are 20 gates leading to the medina, one of which is Bab Ksiba.

The gates all had names depending either on the tribes who used them, the craft practiced near them, or for the part of the city they led to.

In the 12th century the new Almohad Dynasty destroyed most of the buildings constructed by the defeated Almoravid Dynasty, and they built the Kasbah and created new gates in the walls of the city. Bab Ksiba is one of those gates.

As the gates served a utilitarian purpose, they are largely unadorned, apart from verses of the Koran engraved above their arch, so it is sometimes difficult to know which gate you are going through. Most of them have modern name-plates, but often these are covered in graffiti or have been pinched as souvenirs.

You can’t mistake the Bab Ksiba, as it has a huge and ancient Eucalyptus tree on its left hand side, and often the locals gather in its shade to catch up on news and exchange gossip.
Image by Maverickhawkesley on Wikimedia under Creative Commons License.
4

There are 20 gates in the Marrakech ramparts, the most elaborate of which is the magnificent Bab Agnaou.

This Bab served as the entrance of the palace in the medina and appears to have been more of a decoration than a defense. It was built in the 12th century on the order of the Almohad sultan Yacoub el-Mansour.

It takes its blue/ochre color from the Gueliz sandstone of which it is built. It is made up of four semi-circular carved arcs one over the other, with a frieze along the top inscribed with verses from the Koran in Koufic lettering. The decorations feature geometric floral patterns.

Two broken areas at each end of the top of the gate suggest that two slender towers once stood, which might account for its name – Agnaou in ancient Berber means “ram without corns”.

The palace was the northern part of the Kasbah and housed the royal family. The rest of the Kasbah was inhabited by the military and the administrative staff. The gate was renovated and reduced in size during the 16th century.

The gate today is the most famous and the most photographed of the gates in the ramparts, and like them it is a UNESCO World Heritage Site.
Image by Donarreiskoffer on Wikimedia under Creative Commons License.
5

The Marrakech Ramparts surround the Medina, or old town. They are steeped in history and seem to change colors depending on the time of day.

The ramparts were built in the 12th century, commanded by Sultan Ali ben Youssef as a defensive measure to protect the city against their rivals living in the High Atlas. Ben Youssef was the sultan of the Almoravides, a Berber dynasty, which reigned in Morocco between 1030 and 1147. One of their main rival tribes was the Almohades, who eventually defeated them and took over the empire.

The walls are a total of 19km long and 10 meters high, built of a mixture of earth, stone and lime on a wooden structure. This might not seem very solid for a city’s defense, but huge blocks of stone were difficult to come by and the walls were frequently repaired.

The walls have nearly 200 turrets where guards kept watch day and night. There are 20 gates, most of which were ascribed to a certain tribe or to a certain craft, such as the Bab el Debbagh, the “Gateway of the Tanneries”.

Why You Should Visit:
Among the best preserved and most photogenic walls you'll find in the Arab world.

Tip:
Take a carriage ride around the ramparts to fully experience them. Negotiate a sensible price ($15-$25) before you get on the carriage to avoid any arguments. Leave a tip and you'll be surprised at the response.
Image by gripso_banana_prune on Flickr under Creative Commons License.

A nice activity while in Marrakech is visiting the few palaces this city possesses. Some of them, refurbished and restored, successfully function today as museums. Others, on the other hand, are slowly turning into ruins, but still have a long story to tell and spectacular architecture to amaze with. Take the Marrakech's Palaces Tour and enjoy the mystic atmosphere of these grandiose...  view more

Most of the tour guides would introduce you to the most popular attractions, taking you on a tour to the imposing palaces, important religious sites, museums and, of course, some shopping places. However if you are looking forward to seeing a more uncommon Marrakech, this tour is just the thing you are looking for. Take this tour and discover the local traditions of a unique and unusual Marrakech.

Probably no shopping in your life will compare to this extraordinary experience: vivid, bright, juicy colors of carpets, clothes and shoes; enchanting smells of local perfumes and spices; crafts, handmade jewelry, pottery; and of course, the long shopping mazes and souks. All this is included in the tour below, so don't hesitate! This tour belongs on your "must do" list!

One of the first things your thirsty, adventurous mind starts wondering about when arriving in a new city is the culture of its people, especially when the city you're in is Marrakech. Everything here seems unique and authentic, blending together traditional African style and European influences. Take the tour below and enjoy the best of Marrakech's culture.

Also known as "The Red City", Marrakech is an out-of-the-ordinary getaway which combines the old historic atmosphere of Medina with a lively modern tourist sights of Gueliz. Take this orientation walk and discover the most popular attractions Marrakech has to offer, as listed below.

Dating back to the 19th century, Marrakech's Medina reveals an old Islamic capitol featuring important architectural historic and cultural sights, surrounded by beautiful ramparts. In 1985 it was listed as an UNESCO World Heritage Site. This walking tour will take you to the most popular attractions in the south part of Medina.