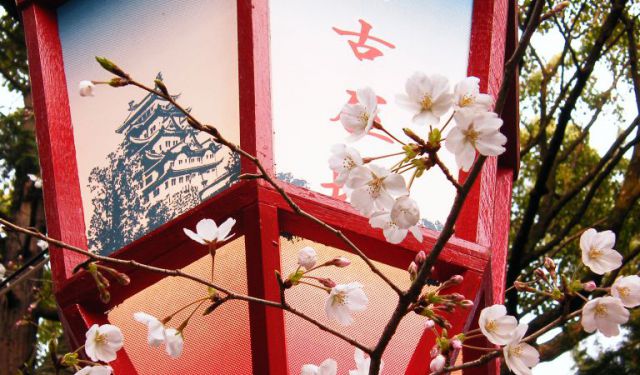 Image by emrank on Flickr under Creative Commons License.

North Nagoya is famous for housing the city’s most prominent architectural landmark, the magnificent Nagoya Castle. Other notable sights include the Meijo Koen Park, Nagoya City Hall, Gokoku Shrine and more. Take this self-guided tour of North Nagoya to discover top attractions of this part of the city.
How it works: Download the app "GPSmyCity: Walks in 1K+ Cities" from iTunes App Store or Google Play to your mobile phone or tablet. The app turns your mobile device into a personal tour guide and its built-in GPS navigation functions guide you from one tour stop to next. The app works offline, so no data plan is needed when traveling abroad.

The Johokubashi Church is one of only a handful of Catholic churches in the whole country. This rare place of worship provides a complete range of services traditional to the faith for both Catholic residents and visitors.
Image by Jojojoe on Wikimedia under Creative Commons License.
2

The Meijo Koen Park is a spacious open area located near the Nagoya Castle. This wonderful park has lots of beautiful flowers and trees that make it a great place for a relaxing walk. There are also a number of water fountains here, as well as lakes, statues and an original mill.
Image by rumpleteaser on Flickr under Creative Commons License.
3

Nagoya City Hall is constructed in a fusion Japanese and modern style. It survived the bombings of World War II. It is registered as a Tangible Cultural Property of Japan.

It is located close to the Aichi Prefectural Government Office. The present main buildings was built on September 6, 1933.

Image by Gnsin on Wikimedia under Creative Commons License.
Sight description based on wikipedia
4

The Gokoku Shrine is a wonderful religious building which is dedicated to the fallen heroes of the Aichi region who died protecting their country throughout history. Located south of the Nagoya Castle, the site also has several monuments, including the Battleship Yamato Monument and the Navy's Flight Reserve Students Monument.
Image by Ichibanto on Wikimedia under Creative Commons License.
5

The Nagoya Castle's Main Gate, originally known as Nishinomaru-enokida Gate, was destroyed by fire during World War II. Carefully rebuilt in 1959, it remains an excellent example of old Japanese architecture and a source of national pride to Japan.
Image by neepster on Flickr under Creative Commons License.
6

During the Edo period, Nagoya Castle was the center of one of the most important castle towns in Japan—Nagoya-juku— and it included the most important stops along the Minoji, which linked the Tōkaidō with the Nakasendō. The castle complex is made up of several enceintes, which are divided by the outer moat (Soto-bori) and inner moat (Uchi-bori). Each enceinte is protected by walls with turrets strategically located at each corner. Access from one enceinte to the next was controlled by guarded gates that were accessible by bridges. The castle is a good example of the type built on flat lands.

The Honmaru enceinte is in the centre of the complex, containing the main and minor donjon, along with the palace. The Ninomaru enceinte is located to the east, the Nishinomaru to the west, the Ofukemaru, also known as the Fukaimaru, to the northwest, and the Sannomaru around the east and south. Today's Meijō Park was part of the larger castle's grounds to the north, which were used as pleasure gardens, with a large pond.

The Ninomaru gardens and other areas such as the Ofukemaru have a wide variety of flora. In Spring, Japanese Cherry, wisteria, camellia, and peony bloom. In the summer it is iris, crape myrtle, plantain lily, and hydrangea; in autumn the confederate rose, Japanese quince and crape myrtle, and in winter the Japanese witch hazel, Japanese quince, wintersweet, and Japanese plum that bloom. During the summer, Sika Deer can be observed grazing in the moats that are dry and covered with grass.

Image by Fg2 on Wikimedia under Creative Commons License.
Sight description based on wikipedia
7

Located in the Nagoya Castle area, the Ninomaru Garden dates all the way back to the 17th Century. This traditional Japanese landscape garden is a great place to walk around in, and it’s also home to the Ninomaru Tea House, where you can still find traditional Japanese tea ceremonies.
Image by rumpleteaser on Flickr under Creative Commons License.