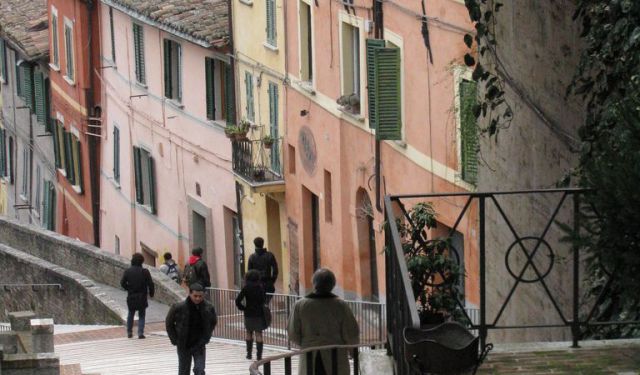 Image by Annabel Symington on Wikimedia under Creative Commons License.

The north end of Perugia is a fascinating area, as it is home to a number of historic monuments, old buildings and medieval arches. Here you will find the prominent aqueduct, Arco Etrusco, the Baroque Stuart Gallenga Palace, Porta Sant Angelo, Perugia City Walls and other attractions. Take the following tour to discover northern Perugia.
How it works: Download the app "GPSmyCity: Walks in 1K+ Cities" from iTunes App Store or Google Play to your mobile phone or tablet. The app turns your mobile device into a personal tour guide and its built-in GPS navigation functions guide you from one tour stop to next. The app works offline, so no data plan is needed when traveling abroad.

Via Appia is an old pedestrian street located near the aqueduct. Walking along Via Appia you can admire an impressive view of the old city, including medieval arches and houses and historic buildings.
Image by maresogno67 on Wikimedia under Creative Commons License.
2

2) Arch of the Aqueduct (Arco di Via Appia) (must see)

The Arch of the Aqueduct is one of numerous medieval arches in Perugia, located on Aqueduct Street. It was constructed in the late 13th century, probably at the time the aqueduct was built, which carried water from Mount Pacciano to Piazza IV Novembre. On either side you can see the foundations of the old Etruscan walls. The arch was renovated by Giulio Danti in 1516.
Image by scudsone on Wikimedia under Creative Commons License.
3

Located on Piazza Fortebraccio, this arch is one of the seven gates in the Etruscan walls of Perugia. Over time the arch has had several names, including Port Tezia, Borca Gate, Triumphal Arch, the Old Port and Port Pulchra. It was built in the late 3rd century BC and was taken by Augustus in 40 BC after his victory in the war of Perugia. It is the most integral and monumental Etruscan gate in the city, consisting of two trapezoidal towers and an arched facade. Above it you can see a Renaissance loggia.
Image by Francesco Gasparetti on Wikimedia under Creative Commons License.
4

Stuart Gallenga Palace, formerly Palazzo Antinori, dates back to the 18th century. Located on Piazza Fortebraccio, this Baroque palace was built by Giuseppe Antinori as a residence for Perugia’s noble family, Antinori. In 1875 the building was purchased by Stuart Gallenga Romeo, giving it its present name. In 1926 he gave the palace to the city, and in 1927 it became the headquarters of the Foreigner’s University of Perugia. The vestibule and the staircase at the entrance are of great architectural value. Inside you will find the Great Hall with a cycle of frescoes painted by Futurist Gerard Doctors in the 1930s, called the Apotheosis of Rome.
Image by Francesco Gasparetti on Wikimedia under Creative Commons License.
5

Monastero di Santa Caterina, located outside Porta Sant'Angelo on Via Giuseppe Garibaldi, was built by architect Galeazzo Alessi in the mid-16th century. Today it is home to branch offices of the Superintendence for Architectural Heritage, Landscape and Historical Anthropological Heritage of Umbria. This old brick façade contains 18th century frescoes by Mattia Batini.
Image by Orthodox33 on Wikimedia under Creative Commons License.
6

Tempio di Sant Michele Arcangelo, or the Church of St. Archangel Michael, is one of the oldest churches in Italy, dating back to approximately the 5th century. Built on the ruins of an earlier Roman temple, this religious building is an example of Palaeo-Christian art, reminiscent of Santo Stefano Rotondo in Rome. It features 16 columns and Gothic style arches. In its frescoes you can see mystic symbols of the Knights Templar, whose legendary history is full of secrets. A few meters from the entrance you can see a pentagram, a symbol linked to the cult of Venus, which was associated with black magic in the Middle Ages.
Image by Aracuano on Wikimedia under Creative Commons License.
7

Porta Sant Angelo is an impressive crenelated medieval gate located at the end of Via Giuseppe Garibaldi, the main street of Perugia’s historic district, which was surrounded by walls between the 13th and 14th centuries. Inside the gate you will find the Museum of the City Walls, where you can trace the city's urban development over the centuries, including Etruscan, medieval and Renaissance sections of the walls. Near the gate you will find the 13th century Church of St. Matthew.
Image by Gaspa on Flickr under Creative Commons License.
8

The Perugia City Walls, designed to keep invaders from entering, are still largely visible today, mostly on the west and north sides of the city. Perugia was surrounded by them between the 6th and 3rd centuries BC. It includes seven gates, six of which remain standing.
Image by John Spooner on Flickr under Creative Commons License.
9

Outside the Perugia City Walls you will see a steep street leading to the Convent of San Francesco del Monte, or Monteripido of Perugia. The first evidence of its construction was mentioned in 1290. Rebuilt in 1858, inside you will find impressive frescoes, furnishings and a beautifully decorated wooden ceiling.
Image by Gaspa on Flickr under Creative Commons License.