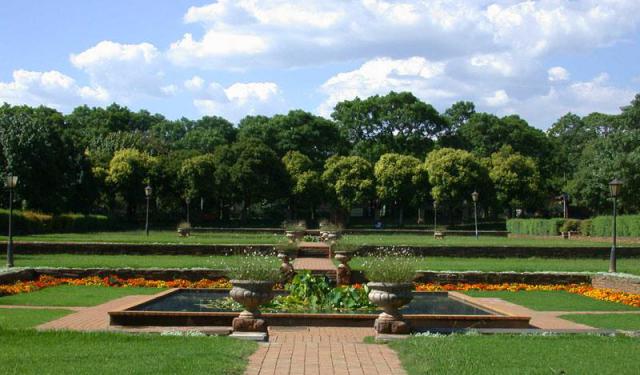 Image by Laurens on Wikimedia under Creative Commons License.

Pretoria is the main cultural center of South Africa. The following walking tour will lead you to the museums, galleries, theaters, and nightspots of the city's northern region and will show you the diversity of Pretoria's cultural life.
How it works: Download the app "GPSmyCity: Walks in 1K+ Cities" from iTunes App Store or Google Play to your mobile phone or tablet. The app turns your mobile device into a personal tour guide and its built-in GPS navigation functions guide you from one tour stop to next. The app works offline, so no data plan is needed when traveling abroad.

South African State Theatre is not just a theatre. It is a complex of venues capable of hosting all kinds of artistic and commercial events, from opera, ballet, cabaret, film festivals, and children's theatre to weddings, parties, and product launches. The theatre plays a leading role in developing and training local performing arts groups.
Image by stuart001uk on Flickr under Creative Commons License.
2

The Union Buildings, built from light sandstone, were designed by the architect Sir Herbert Baker in the English monumental style and are 285 m long. They have a semi-circular shape, with the two wings at the sides, this serves to represent the union of a formerly divided people. The clock chimes are identical to those of Big Ben in London.

Image by Davinci77 on Wikimedia under Creative Commons License.
Sight description based on wikipedia
3

Venning Park is a formal park with a rose garden, a tea garden, and many areas with colorful flowers that blossom all year round. It occupies an area of over seven acres, and is considered to be one of the most beautiful parks in Pretoria. The park is also famous for a variety of water features.
Image by Laurens on Wikimedia under Creative Commons License.
5

This museum, located on the campus of the University of Pretoria, houses 143 works of South Africa's most famous sculptor, Edoardo Villa. Villa, born in Italy, was first brought to South Africa as a prisoner of war, during World War II; after the war, he chose to remain in the country. Villa donated many of his works to the university, which opened the museum in 1995 to commemorate his 80th birthday.