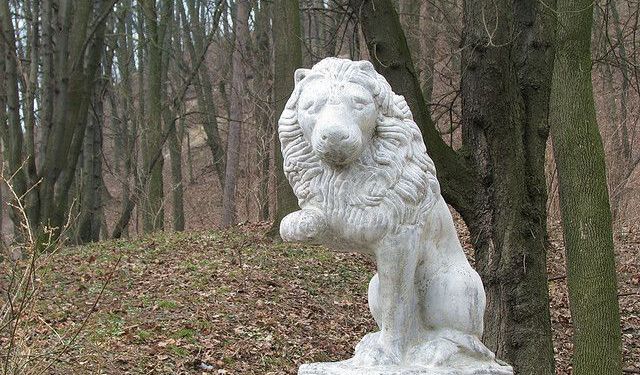 Image by bazylek100 on Flickr under Creative Commons License.

In the north section of Lviv, you will find some enlightening museums and beautiful churches. Memorials dedicated to Jews will tell you the story of the darkest period in the history of this nation. This self-guided tour will lead you through the top tourist attractions in the north part of Lviv.
How it works: Download the app "GPSmyCity: Walks in 1K+ Cities" from iTunes App Store or Google Play to your mobile phone or tablet. The app turns your mobile device into a personal tour guide and its built-in GPS navigation functions guide you from one tour stop to next. The app works offline, so no data plan is needed when traveling abroad.

1) Museum of Brewing (must see)

Lviv is known for its delicious beer. The Museum of Brewing tells the story of beer-making from old times to the present day. You will learn about brewing traditions in Lviv and that Lviv is the oldest beer-producing city in Ukraine. On display are old beer bottles, beer mugs from European countries, and barrels. In the tasting hall you can sample the best of Lviv beers. In addition, the museum shows an interesting film about the Ukrainian brewery.

The Jews appeared in Lviv in the thirteenth century, and prior to World War II the Jewish community here was the biggest in the Ukraine. There are several historical sites dedicated to the Jews in Lviv; one of them is the Holocaust Memorial dedicated to the numerous victims of the holocaust of the Jewish people.
Image by Vodnik on Wikimedia under Creative Commons License.
3

The Basilian monastery and Greek Catholic church of St. Onuphrius is located north of the Old Town in Lviv, at the base of Castle Hill. Records tell us a wooden church existed at this site in the 13th century during the reign of Leo I of Halych. During the second half of the 15th century a monastery was built next to the church. A stone church was built in 1550 and in 1585 a monastery surrounded with fortifications was added. The church was destroyed and rebuilt several times. Damaged by Turks in 1672, it underwent a major reconstruction in 1680. In 1776 the church was connected with the previously separate chapel of the Holy Trinity, adjoining it to the north. A new classicist bell tower was built in 1820 and in the years 1821-1824 the presbytery was extended and a sacristy added. The church's present day look dates to 1902 when the southern nave was constructed symmetrically and both were topped with hexagonal domes.
Image by Vodnik on Wikimedia under Creative Commons License.
Sight description based on wikipedia
4

4) Monument to Victims of Political Repressions

The Monument to Victims of Political Repressions was placed to remind visitors of this dark part of the Ukraine's history. It is one of the monuments in Lviv dedicated to victims of severe repressions and deportations. The monument itself reflects the tortures and sufferings which the Soviet people experienced.
Image by spoilt.exile on Flickr under Creative Commons License.
5

The Church of Saint Nicholas is located in the oldest part of Lviv near the Old Market Square. From here Lviv began its history. This church dates back to 1292. It was a very important church as it used to be the place of worship for Lviv's princes. This church is an excellent example of ancient Russian ecclesiastic architecture.
Image by Alex Zelenko on Wikimedia under Creative Commons License.
6

6) Church of St. John the Baptist

The Church of St. John the Baptist is considered to be one of the oldest architectural monuments in Lviv. It dates back to 1250 and was constructed by Prince Lev Danilovich. The architecture of the church was altered several times and new features were added through its history. The Museum of Lviv Ancient Relics is housed in the church, telling the history of Lviv from the time of its foundation. You will learn some curious things about the life of Prince Danylo Galytsky, the founder of this city. You can also admire works of art and religious relics that are on exhibit.
Image by Alex Zelenko on Wikimedia under Creative Commons License.
7

The Lviv High Castle is a historic castle located on one of Lviv's hills. It is currently the highest point in the city, 413 meters above sea level. The Castle Hill took its name from the High Castle (as opposite to the other, Low Castle), which was located on the hill from the 13th century to the late 19th century. The castle, a main defensive fort of the city during its existence, was rebuilt and repaired many times. In the 19th century, the then-destroyed castle was taken apart and new items were built in its place. The fortification was strengthened, trees were planted on the hill's slope, and a park was constructed. On the place where the castle once stood, a Union of Lublin Mound was constructed in 1869, dedicated to the 300-years of the Union of Lublin. Currently, an observation platform is located atop the kurgan. In 1957, a 141-meter tall television tower was constructed on top of the hill.
Image by VargaA on Wikimedia under Creative Commons License.
Sight description based on wikipedia

The eastern area of Lviv has some great historical monuments that are listed as UNESCO World Heritage Sites. You will find more memorials in this part of Lviv than in any other part of the city. Take this self-guided tour to explore the interesting places in the eastern part of Lviv.