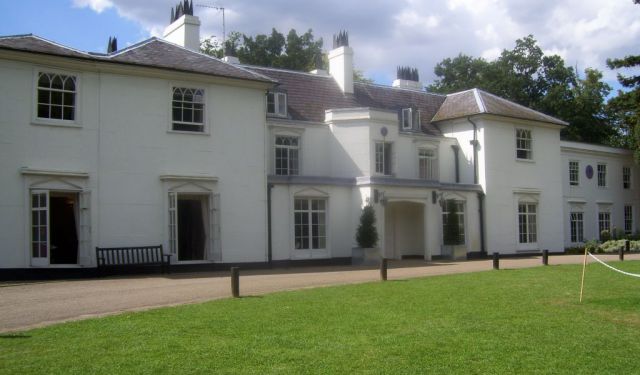 Image by Tom Warren on Wikimedia under Creative Commons License.

The northern area of Virginia Beach boasts a number of different attractions for the visitor. You can see historical sights such as old cottages and colonial style homes, some of which have been transformed into house museums. There are also a great antique shop and a Cinema Cafe. Take our tour to see the best spots in this part of town.
How it works: Download the app "GPSmyCity: Walks in 1K+ Cities" from iTunes App Store or Google Play to your mobile phone or tablet. The app turns your mobile device into a personal tour guide and its built-in GPS navigation functions guide you from one tour stop to next. The app works offline, so no data plan is needed when traveling abroad.

This church is the largest Catholic Church in the entire region. This large edifice typifies the American style of Catholic Church that differs noticeably from those in the rest of the world.
Image by Billy Hathorn on Wikimedia under Creative Commons License.
2

The Rosewood Memorial Park is full of beautiful monuments for the visitor to admire. This beautiful cemetery is very well kept, and makes for an interesting place in which to walk around in.
Image by amandabhslater on Flickr under Creative Commons License.
3

If you like watching a movie while you eat your dinner, you will definitely enjoy the Cinema Café. Here there is a huge choice of delicious meals you can enjoy while you watch movies right from your seat.
Image by Alpha on Wikimedia under Creative Commons License.
4

4) The Statue of Grace Sherwood

The statue of Grace Sherwood, also known as the Witch of Pungo, is probably the most famous monument in Virginia Beach. In 1698, Grace Sherwood was said to be guilty of bewitching somebody's crops. She was the last person known to have been convicted of witchcraft in Virginia. She was imprisoned and tortured. In fact, she was not a witch but a good woman who loved animals. She was also considered a special healer in her time, hence the statue’s location near a hospital.
5

The Lynnhaven House, which was built circa 1725, is an example of 18th century Tidewater Virginia vernacular architecture. Although it was founded by the Thelaball family, it is sometimes referred to as the Boush House or the Wishart House. The house was given the name the Lynnhaven House due to its close proximity to the Lynnhaven River, which flows on the same property. Now, it is located on five and a half acres.

This house reflects the social and economic status of Francis Thelaball, a middling plantation owner who built it for his family. Behind the historic house lies a small cemetery with plots that date back to the American Revolutionary War.

The 18th century home has had very few changes made throughout the years and is estimated to still have 85% of its original materials intact, which makes it one of the country's best-preserved buildings from that time period.


Image by NG71 on Flickr under Creative Commons License.
Sight description based on wikipedia

Virginia Beach has plenty to enjoy for art lovers visiting the city. The area nearest the coastline is of particular interest, as a number of heritage landmarks are located in this old part of the city. There are also many contemporary art galleries, museums and monuments around the city that highlight the cultural aspects of Virginia Beach. Take our Cultural Tour to see the best art spots in the...  view more