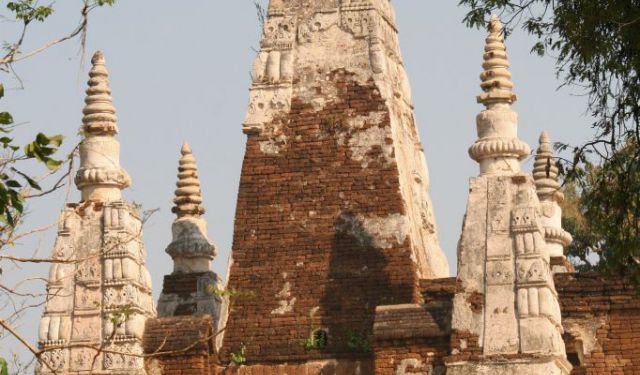 Image by Akuppa on Flickr under Creative Commons License.

Chiang Mai is a beautiful Asian city with a variety of tourist attractions. The city boasts an artsy atmosphere and many gorgeous temples scattered around town. There are several art galleries, museums and temples in the Northwestern part of Chiang Mai. It's also a district where you can experience Chiang Mai shopping. Take this self-guided tour to explore this part of Chiang Mai.
How it works: Download the app "GPSmyCity: Walks in 1K+ Cities" from iTunes App Store or Google Play to your mobile phone or tablet. The app turns your mobile device into a personal tour guide and its built-in GPS navigation functions guide you from one tour stop to next. The app works offline, so no data plan is needed when traveling abroad.

The Chiang Mai University faculty of fine arts with the help of the Government of Thailand established the museum to promote contemporary art and artists from Northern Thailand among the local people. It was built between 1996 and 1998. It is a small museum that has no permanent collection. Interesting themed exhibitions are held in its display halls. The museum maintains relationships with other similar facilities in Thailand and around the world and hosts a variety of changing exhibitions of art and sculpture all through the year.

Temporary exhibitions often include works by contemporary artists from other countries, local new artists and well known contemporary Thai artists. Visitors are assisted by knowledgeable art students in understanding the works displayed. The museum has a main exhibition hall and exhibition room at the back of the first floor, a gallery in front and another display hall at the back of the second floor. There is also a theater within the building. The Museum is located on Nimmanhemin Road opposite the Chiang Mai University auditorium.

Image by Tong Luo on Flickr under Creative Commons License.
2

2) Museum of World Insects and Natural Wonders (must see)

The Museum of World Insects and Natural Wonders is a unique museum in Chiang Mai that is dedicated to all types of insects and their habitats. It is run by the founder, insect enthusiast, Manop Rattanarithikul and his wife Dr. Rampa Rattanarithikul who has a doctorate in entomology.

Manop Rattanarithikul established the museum in 2002. He and his wife have done extensive research on the different types of insects in Thailand and other parts of the world. Manop Rattanarithikul is known as the Mosquito Man because of his in-depth knowledge of the 422 species of mosquitoes in Thailand. One species, the Toxorhynchites Manopi, is named after him.

Manop guides visitors around the museum and explains in detail the different species displayed. The entrance has a display of termite nests, honeycombed nests and other insect habitats. The upper floor has rows of display cabinets with every type of insect. There are stick insects, butterflies, tarantulas, centipedes and beetles in an array of colors. Fossils, reptiles and other objects like coins are also on display. The museum sells insect mounted gift boxes for visitors to take home as mementos of their visit to this unique museum.

Why You Should Visit:
To connect to science with a strong personal and spiritual touch and respect for nature. Quite interesting to see if you are used to Western nature museums.
Anyone visiting is sure to be wowed by what the museum has to offer and will leave with a renewed respect for nature and its little critters.

Image by Noodle snacks on Wikimedia under Creative Commons License.
3

Chiang Mai is considered the handicraft center of Thailand. There are many different shops along Nimmanhaemin Road that sell ceramics, antiques and other handmade things. You can find many great gifts to take home and all are quite inexpensive. There are also many restaurants, with both local and Western food, scattered all along the street.
Image by 23 dingen voor musea on Wikimedia under Creative Commons License.
4

The Wat Jed Yod or the Temple of the Seven Spires is a large quiet temple complex near a busy highway in Chiang Mai. It contains modern as well as ancient ruined assembly halls.

The Wat Jed Yod or Seven Spires Wat gets its name from the seven Chedis or Stupas that form the roof of an ancient assembly hall in the temple. It was here that the eighth World Buddhist Council was held in 1477 to revise the doctrines of the Buddha. It is designed as a replica of the Mahabodhi temple in Bodhgaya in India where the Buddha attained enlightenment and was built by King Tilokkarat. Another Chedi located within the temple complex contains the last remains of the King. The structure with the seven Chedis has architectural elements from Burma and China. There is also a modern Viharn or assembly hall in front of the ancient building.

The Wat Jed Leod is one of the least visited temples in Chiang Mai. Visitors who prefer visiting quieter attractions of the city, far from the madding crowd come here to see the 15th century sculptures and carvings on the walls of the old temple. There are also many large ancient trees that add to the greenery and serenity of the complex.
Image by Akuppa on Flickr under Creative Commons License.
5

Opened to the public in 1973 under the patronage of the King and Queen of Thailand and run by Chiang Mai's Fine Arts Department, the Chiang Mai National Museum is dedicated to the history of the Kingdom of Lanna of which the city was the capital. It is housed in a building designed using the architecture of old Lanna style structures with two floors and a unique traditional roof.

The Chiang Mai National Museum has six sections that include the background of the Lanna region from prehistoric times, the history of the Lanna Kingdom, trade and economy, art, Chiang Mai as part of Siam and Chiang Mai today. There are also dioramas showing Lanna under Burmese rule and the subsequent overthrow of the Burmese and other battles that were fought during the Lanna era. There is also an impressive collection of coins, weaponry, portraits and photographs of the Lanna Royal family.

Why You Should Visit:
It's always good to learn a little about the destination that you are visiting and this small museum, spread over two floors, will enlighten you on the history and culture of Northern Thailand.
There are plenty of exhibits to peruse and they are explained in both Thai and English. The standout display is the amazing ancient Buddha's Footprint which features tiny inlaid mother of pearl work.

Tip:
The place is very clean and well organized; you do have to leave your bags in a locker, but you can take your phone or camera – just no flash photography.