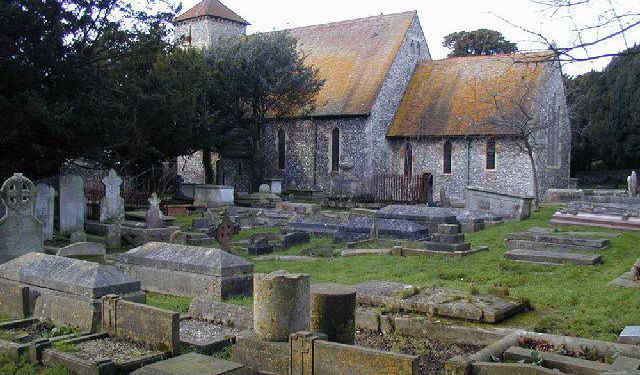 Image by Johanna on Wikimedia under Creative Commons License.

In the northern part of Brighton, you will find a number of interesting attractions. Here you will find old St Mary's Church, 13th-century St Peter's Church, historic Preston Manor House, Preston Park, Booth Museum of Natural History, St. Anne's Well Gardens and other amazing places. This tour will help you to discover the northern part of the city.
How it works: Download the app "GPSmyCity: Walks in 1K+ Cities" from iTunes App Store or Google Play to your mobile phone or tablet. The app turns your mobile device into a personal tour guide and its built-in GPS navigation functions guide you from one tour stop to next. The app works offline, so no data plan is needed when traveling abroad.

St. Ann's Well Gardens is a park in Hove, East Sussex about half a mile from the shore. The park is renowned for its chalybeate (iron bearing) spring, which is now named St. Ann's Well. In this case, the name "St. Ann" does not refer to any saint. Instead, the name was apparently based on a myth of Annafrieda, a Saxon lady whose lover was murdered. Her tears miraculously became the Chalybeate Spring which is now called St. Ann's Well.

St. Ann's Well Gardens has many native and exotic trees. It also has a scented garden that allow the visitor to experience many different smells. St. Ann's Well Gardens is owned and operated by Brighton and Hove City Council. As well as the scented garden, the park has playgrounds for children, with swings, slides etc. Dogs are forbidden in the children's areas, while the rest of the park is a popular place for local residents to exercise their pets.

Image by Simon Carey on Wikimedia under Creative Commons License.
Sight description based on wikipedia
2

St Mary and St Abraam Church is a Coptic Orthodox Church in Hove, in the English city of Brighton and Hove. It is one of 27 such churches in the British Isles, twelve of which are British Orthodox churches. The Race community in Brighton and Hove was founded in 1990; four years later it moved to its present site on Davigdor Road, on the Brighton/Hove border.

The tall red-brick building, in Early English style, has a large pointed-arch window in its eastern face and five smaller windows across the northern face, where the entrance is situated. The last service was held on 17 January 1993, and the church was declared redundant on 20 July 1993.The church has some noteworthy interior features. An enormous mahogany and oak iconostasis was installed in 2000: at 7.5 meters tall, it is said to be the tallest such structure in the world. Pope Shenouda III returned to the church on 13 August 2000 to dedicate the iconostasis, which depicts the Last Supper, Jesus Christ and several other holy figures across 24 icons. Father Zakaria Henein, an Egyptian priest who was in charge of the church at that time, also painted a large icon of Christ above the altar, despite having no formal art training.

Image by Simon Carey on Wikimedia under Creative Commons License.
Sight description based on wikipedia
3

R. W. Berry & Son is a small, second-hand furniture shop situated on Dyke Road. It houses a wide collection of renovated antique furniture including desks, dining tables, chairs, dressers, wardrobes, mirrors and clocks. The staff is friendly and will help you to make a good choice.

Image by AlejandroLinaresGarcia on Wikimedia under Creative Commons License.
4

Booth Museum of Natural History is a municipally-owned museum of natural history in the city of Brighton and Hove. It is part of "Royal Pavilion & Museums, Brighton and Hove". The museum opened in 1874 to house the British bird collections of Edward Booth. He donated the museum to the city in 1890. The museum continues to feature Victorian-style dioramas of British birds in their habitat settings, as well as collections of butterflies, and British fossils and animal bones.

Situated near St. Peter's Church and Preston Park, Preston Manor represents an historic house in Brighton, decorated in Edwardian style. Dating back to the 18th century, it features a rich collection of ceramics, furniture, glass, clocks, silver, decorative art and other objects which belonged to the Stanford family.

St Peter's Church is a former Anglican church in the Preston Village area of Brighton. The 13th-century building, standing on the site of two older churches, was restored in the late 19th century and again after a serious fire in 1906. It was the parish church of Preston until 1908, when the newly built St John the Evangelist's Church gained this status. The Diocese of Chichester declared St Peter's redundant in 1990, and it is now owned by the Churches Conservation Trust. It has Grade II listed status, reflecting its architectural and historical importance.

St Peter's Church is a flint building dressed with stone and with a roof of tiles, standing in a prominent position next to Preston Manor on higher ground than the rest of Preston Village. Built in the Early English style, it has a series of broad lancet windows—three on each side of the nave, and also in the chancel.
Image by The Voice of Hassocks on Wikimedia under Creative Commons License.
Sight description based on wikipedia
7

It is one of Brighton's largest parks, with 63 acres of lawns, formal borders and rose gardens, bowling greens, tennis courts and a small pond. It was bought in 1883 by Brighton Corporation from Mr William Bennett-Stanford who owned the Preston Manor estate and had begun to develop the park as enclosed pleasure grounds. The costs of the purchase and initial layout were funded with a bequest of £70,000 from a local bookmaker, William Edmund Davies in 1879. The park was formally declared open on 8 November 1884. The park remains green throughout the summer because of a non-drinkable underground water source, known as the Wellesbourne, which runs below Preston Park, London Road and The Level. The park is host to various annual events including the festival at the end of the Brighton & Hove Pride parade, the start of the Brighton Marathon, a circus during the Brighton Festival and a large starting event for the Take Part sports festival. Opposite the park, across the main London Road, is The Rockery—the largest municipal rock garden in Britain built up the side of a steep railway embankment.
Image by Les Chatfield on Wikimedia under Creative Commons License.
Sight description based on wikipedia