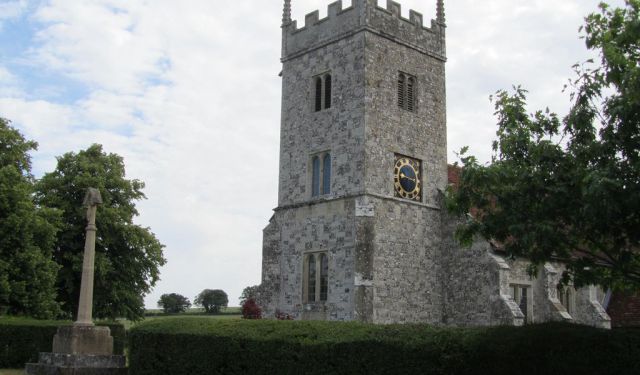 Image by Matthew Black on Flickr under Creative Commons License.

On this self–guided tour you will explore Salisbury's historical and modern landmarks that are located outside of the city center. The Old Sarum settlement, stunning St. Francis Church, Stratford-Sub-Castle, St. Lawrence Church and interesting old houses on Strafford Road all shouldn't be missed!
How it works: Download the app "GPSmyCity: Walks in 1K+ Cities" from iTunes App Store or Google Play to your mobile phone or tablet. The app turns your mobile device into a personal tour guide and its built-in GPS navigation functions guide you from one tour stop to next. The app works offline, so no data plan is needed when traveling abroad.

Victoria Park was established in 1887 and is considered to be the oldest park in the city. It is located in northern Salisbury, opposite St. Francis Church. The park is divided into two parts: southern and northern. The southern section features colorful flower beds, planted trees and shrubs, while the northern section includes a children’s playground, sport facilities and the city’s Victoria Bowls Club. There is also a pavilion and cafe at the park. Entry to the park is free.
Image by Andrew Smith under Creative Commons License.
2

St. Francis Church is located at the junction of Beatrice Road and Castle Road and was built in 1939. The consecration of this evangelical Anglican Church took place in 1940. It is modern-style building with concrete curved walls faced with red brick and stone. The roof is made of reinforced concrete, and there is a 70-foot-high tower on the south side of the church. The bells were taken from St. Giles at Imber. The congregation currently consists of about 200 people dedicated to exploring the Bible as God’s Word.
Image by Trish Steel under Creative Commons License.
3

Old Sarum is evidence of the ancient origin of Salisbury. It is believed that an early settlement was located on this site from 300BC to the beginning of the 13th century. The settlement stood on top of a hill at the junction of multiple important trade routes. William the Conqueror erected a palace and a fort here. Residents and conquerors created various defensive structures for the settlement and the ruins of these battlements can be seen today. In the 1090s a cathedral and bishop's palace were built, but soon after a storm partially demolished them. By 1219, a lack of space led to the decline of Old Sarum, and the bishop requested that the cathedral be relocated to New Sarum (Salisbury).
Image by Sebastian Ballard under Creative Commons License.
4

The Dairy Cottage at Stratford-Sub-Castle is thought to date back to the 17th century. The cottage is a one-story thatched building with an attic. The cottage was built with natural materials sourced locally: stone, dressing brick and flint. There is a garden and some outhouses, and the property extends up to the meadows. The west front of the house faces the roadside and provides a lively view of the street from inside.
Image by Nancy Oltman and Pat Hurley on Flickr under Creative Commons License.
5

This Grade II listed, 16th-century cottage is located at Stratford-Sub-Castle toward the southern end of the picturesque Woodford Valley. It is a black-and-white, half-timbered house with cobblestone plinths, common in this part of England. The interior features chambered beams and an open fireplace. The house is now under private ownership.
Image by theilr on Flickr under Creative Commons License.
6

Old Sarum View, an early 17th-century house at Stratford-Sub-Castle, sits at the junction of Stratford Road and Miln Lane. This is a two-story brick structure with a high attic and traditional thatched roof. The northwest and the southwest wings have a wooden frame, while the northeast and southeast wings were faced with brick in the 1700s. Inside Old Sarum View Cottage there are several rooms, an entrance hall and a chimney stack. The interior features plaster work with original moulded edging decorated with birds and flowers. The cottage used to serve as a village shop until the 1970s.
Image by Horia Varlan on Flickr under Creative Commons License.
7

Mawarden Court, built in 1649, was originally a rambling manor that included the house, barns and stables, small inner yard, two gardens, orchard, pasture and meadow. By 1793 the manor house was separated from the grounds. The current flint and stone structure has two gabled wings with a small gable at the center. Recently the garden was restored. A new rose garden was planted, and paths to the River Avon and surrounding woodland were added.
Image by Trish Steel under Creative Commons License.
8

St Lawrence's Church at Stratford-sub-Castle is situated to the north of Salisbury and close to the abandoned settlement of Old Sarum. The date of the foundation of this church is uncertain and it is first mentioned as a chapel annexed to St Martin's at Salisbury. The church was said to have been consecrated in 1326 but this could have been a rebuilt church, replacing an earlier one on the site. There is a 12th century font, but it is possible that this could have originated elsewhere. It is most probable that much of the stone came from the abandoned buildings at Old Sarum. Some features of the chancel are of the 13th century and there were alterations and repairs in the 15th century. From this period comes the waggon roof, with its interesting carved bosses, probably of 1461.

The nave was probably largely rebuilt in the 16th century and in 1711 the tower was rebuilt, most likely as a copy of the late medieval one. The building was restored in 1904-05 under the direction of W. D. Caroe and more repairs were carried out in 1926. Electric lighting was provided in 1948, and there was a further restoration in 1957-58. There are many pre-Victorian fittings, with an oak chancel screen of the 15th or early 16th century and many other internal fiitings of the early 18th century. In 1553 there were three bells, but one was sold in 1584. The two remaining bells are dated 1594 and 1767. The parish registers date from 1654, and those not in current use are held are held in the Wiltshire and Swindon History Centre at Chippenham.

Image by Trish Steel under Creative Commons License.
Sight description based on wikipedia
9

The Manor House, located at the junction of Phillips Lane and Stratford Road, was originally called Upper Farm. The name was changed to the Manor House in 1867. The house is two-story structure with remarkable brick chimneys. It is a late 16th- or early 17th-century manor made of flint and stone and roofed with tiles. The building has been renovated on multiple occasions, and its west side was entirely reconstructed around 1900. The entire internal wooden framework was rebuilt in the 1950s. In spite of all the alterations, the house has remained true to its original design.
Image by Mike Searle under Creative Commons License.