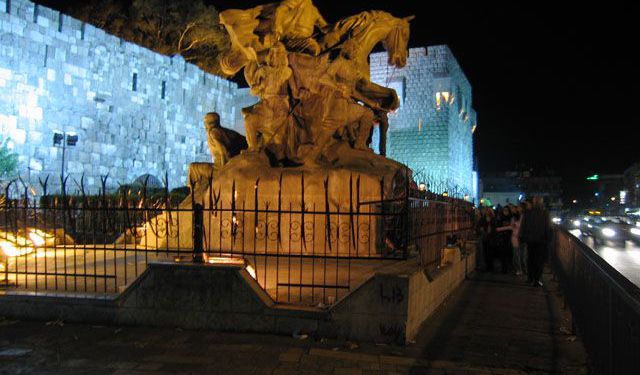 Image by Yosemite on Wikimedia under Creative Commons License.

Damascus has plenty of marvelous tourist attractions. Its northwest area is home to the ancient Al Dahdaah graveyard, the beautiful Al-Tawbah Mosque, the Museum of Historical Documents and Al Harikah Square. Follow the next self-guided tour to visit these amazing places and more!
How it works: Download the app "GPSmyCity: Walks in 1K+ Cities" from iTunes App Store or Google Play to your mobile phone or tablet. The app turns your mobile device into a personal tour guide and its built-in GPS navigation functions guide you from one tour stop to next. The app works offline, so no data plan is needed when traveling abroad.

Al Harikah Square is a famous commercial square that houses a number of shops and a beautiful fountain in its center. It had been a residential area up until it was bombed by the French military.
Image by gothopotam on Flickr under Creative Commons License.
2

The prayer hall is accessed through a door centered on the portico and flanked by windows with arched tympana. Adjoining the windows on both sides of the portico are three tile panels. The first panel on the east side is a tiled mihrab niche followed by a flat tiled panel depicting a niche. A similar panel is found on the west side of the entrance.

Image by Kazuyoshi Nomachi on Wikimedia under Creative Commons License.
Sight description based on wikipedia
3

3) Statue of Saladin (must see)

The Statue of Saladin, a bronze statue depicting the Kurdish Ayyubid Sultan Saladin, is located in front of the Citadel of Damascus. Designed by Syrian sculptor Abdallah al-Sayed, it was unveiled by the late Syrian president Hafez Assad in 1993 to mark the 800th anniversary of Saladin's death. The statue, which graces the main plaza of the city, depicts Saladin in the same pose and the same dress as he appears in a number of 19th-century Western depictions of the Crusades. On each side of Saladin's horse stand two soldiers and a Sufi. Behind the horse, two crusaders, Guy of Lusignan and Raynald of Châtillon, kneel. According to the sculptor, Saladin appears not as an individual warrior but as a leader embodying a wave of popular feeling against the Franks.
Image by Godfried Warreyn on Wikimedia under Creative Commons License.
Sight description based on wikipedia
4

Bardbeg, or Moaalaq Mosque, a gorgeous Mamluk style mosque, is made of black and white stones. This magnificent religious building features a beautiful minaret and is a fine example of local architecture.
Image by David Lisbona on Wikimedia under Creative Commons License.
5

Al-Tawbah Mosque, one of the oldest mosques in Damascus, is located in the northern part of the city. With its white dome, pleasant courtyard and beautiful ornaments, it is a wonderful attraction and a popular place of worship.
Image by Muhammad Baqâ Ibn Mullâ Khodâyquli on Wikimedia under Creative Commons License.
6

Al Dahdaah Graveyard, located in the northern part of Damascus, dates back to the First Islamic conquest of Damascus in 640 and is the largest burial ground in the city. Visitors will be impressed by its number of ancient graves.
Image by bogenfreund on Flickr under Creative Commons License.