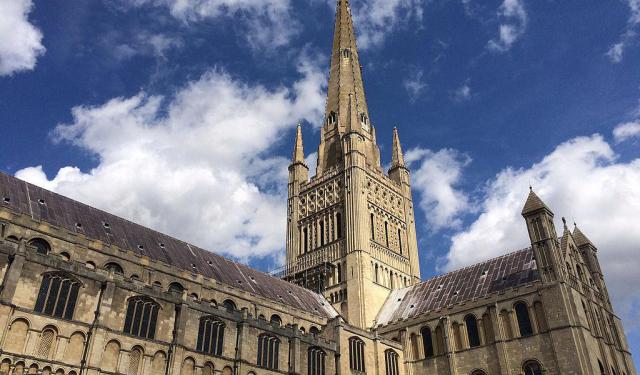 Image by Mkooiman on Wikimedia under Creative Commons License.

Containing a wide assortment of churches and cathedrals, Norwich has much to be proud of when it comes to its religious heritage. Each one is beautifully decorated and has its own story to tell. Check out Norwich’s most fascinating religious edifices in the following tour.
How it works: Download the app "GPSmyCity: Walks in 1K+ Cities" from iTunes App Store or Google Play to your mobile phone or tablet. The app turns your mobile device into a personal tour guide and its built-in GPS navigation functions guide you from one tour stop to next. The app works offline, so no data plan is needed when traveling abroad.

Norwich Cathedral is an English cathedral dedicated to the Holy and Undivided Trinity. It is the cathedral church for the Church of England Diocese of Norwich and is one of the Norwich 12 heritage sites. The cathedral was begun in 1096 and constructed out of flint and mortar and faced with a cream coloured Caen limestone. A Saxon settlement and two churches were demolished to make room for the buildings. The cathedral was completed in 1145 with the Norman tower still seen today topped with a wooden spire covered with lead. Several periods of damage caused rebuilding to the nave and spire but after many years the building was much as it is now, from the final erection of the stone spire in 1480.

The large cloister has over 1,000 bosses including several hundred carved and ornately painted ones. The cathedral is on the lowest part of the Norwich river plain with Mousehold heath, an area of scrubland, to the north. The total length of the building is 461 feet (140 m). Along with Salisbury and Ely the cathedral lacks a ring of bells which makes them the only three English cathedrals without them. One of the best views of the cathedral spire is from St. James's Hill on Mousehold Heath. Norwich Cathedral has a fine selection of 61 misericords, dating from three periods - 1480, 1515 and mid-19th century.

Image by Steven Duhig on Wikimedia under Creative Commons License.
Sight description based on wikipedia
2

St. Andrew's Church, built in 1506 in the Gothic style, is the second largest medieval parish church in Norwich. This Protestant church is very beautiful, with stained glass windows, columns supporting its impressive ceiling and a beautiful chapel with icons of saints. It also contains a wonderful collection of monuments, tombs and sculptures.
Image by Ian Hadingham on Flickr under Creative Commons License.
3

This small church is rather famous. Around the 14th century, Dame Julian of Norwich stayed here. In 1953 it was reconstructed. The exterior is lovely, made of red brick with round widows, a standard feature of Anglo-Saxon churches. Inside you will see sculptures of the twelve apostles, which are very beautiful and unique. It also contains two large and impressive stained glass windows.
Image by celesteh on Flickr under Creative Commons License.
4

St. John Timberhill Church, erected in 1832 in the Anglo-Saxon style, is rather large, containing a nave, chancel and two aisles. Its high arched windows are framed in gold fringe. Inside you will find a chancel screen, several crosses, a figure of Christ and monuments. The most notable monument is dedicated to Robert Page. Also there are choir stalls made of heavy wood, and an altar with a candelabrum over it.
Image by john jollivet on Flickr under Creative Commons License.
5

Located in the heart of the city, All Saints Church is a characteristic 15th century church. Its most interesting feature is the altar, which is beautifully decorated, with Christ in Majesty in the middle. There is a also a huge stained glass window above the altar with an image of Madonna and Child. Nearly every window is decorated with icons of saints.
Image by Mn on Wikimedia under Creative Commons License.
6

St. Stephen’s Church, thought to date back to Saxon times, was reconstructed in 1550, made of flint and white stone. Its interior is very beautiful, with columns supporting the wooden ceiling. At the end of the long narrow chapel is a huge arched stained glass window, and its walls are decorated with many monuments. Another major reconstruction took place in 1850.
Image by Radek Chrzempka on Flickr under Creative Commons License.
7

St Peter Mancroft is a parish church in the Church of England. It is the largest church in Norwich and was built between 1430 and 1455. It stands on a slightly elevated position, next to the market place. St Peter Mancroft is a member of the Greater Churches Group. The present building was begun in 1430, on the site of an existing church, and consecrated in 1455.

St Peter Mancroft is an ambitious building, 180 feet long and ashlar faced with a tower at the west end. It has a Norman foundation dating from 1075, a 1463 font, a 1573 Flemish tapestry, medieval glass and a memorial to Thomas Browne, author of Religio Medici. The small lead-covered spire with flying buttresses was added by A.E. Street in 1896. In 1850 two L-shaped trenches accommodating a number of acoustic jars were discovered beneath the wooden floor on which the choir stalls had previously stood. The earthenware jars were built into its walls at intervals of about three feet, with the mouths facing into the trenches. St Peter Mancroft has a ring of fourteen Whitechapel bells in the western tower, eleven of which date from 1775 and the latest of which dates from 1997.

Image by The Old Penfold on Flickr under Creative Commons License.
Sight description based on wikipedia
8

Built around 1400, St. Giles Church was constructed of knapped flint. This beautiful building has several high arched windows and marble columns. The color green dominates its well-lighted interior. It has a beautiful altar with two figures of saints behind it. In the center of the ceiling hangs a cross. It also boasts many sculptures and memorials to famous Norwich doctors such as Thomas Churchman and William Offley.
Image by Graham Hardy on Wikimedia under Creative Commons License.
9

The Cathedral Church of St John the Baptist is the Roman Catholic cathedral of the city of Norwich.

The Cathedral, located on Earlham Road, was constructed between 1882 and 1910 to designs by George Gilbert Scott, Jr. as a parish church dedicated to John the Baptist, on the site of the Norwich City Gaol. The funds for its construction were provided by Henry Fitzalan-Howard, 15th Duke of Norfolk. In 1976 it was consecrated as the cathedral church for the newly erected Diocese of East Anglia and the seat of the Bishop of East Anglia. It is the second largest Roman Catholic cathedral in England. In 2005, St John's Open Days proved to be very popular, resulting in many first time visitors coming to view the Cathedral. Celebrity chef Delia Smith is one of the regular worshipers at the cathedral.

Image by Colin-47 on Flickr under Creative Commons License.
Sight description based on wikipedia