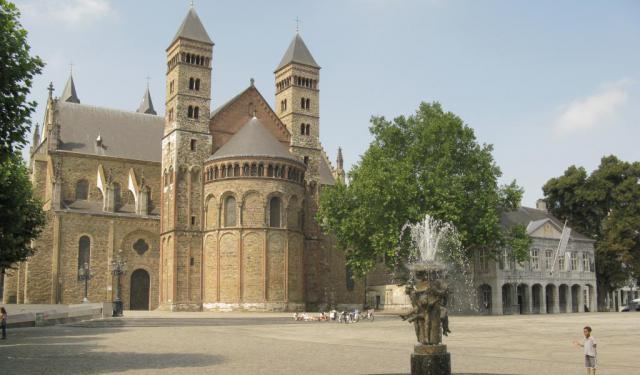 Image by >WouteR< on Flickr under Creative Commons License.

Maastricht is a charming city located on the banks of the River Maas. The city boasts numerous religious and secular buildings designed in the Gothic style. There are also many fine examples of Baroque, Romanesque and Renaissance architecture. This tour will guide you to some of Maastricht's most fascinating historic buildings.
How it works: Download the app "GPSmyCity: Walks in 1K+ Cities" from iTunes App Store or Google Play to your mobile phone or tablet. The app turns your mobile device into a personal tour guide and its built-in GPS navigation functions guide you from one tour stop to next. The app works offline, so no data plan is needed when traveling abroad.

Ursuline Convent was built in 1890 by architect John Kayser, and it is famous for its Neo-Gothic style. The design of the building was influenced by German Gothic architecture. The convent is made of glazed brick and the nave is decorated with stepped gables. Ursuline Convent was heavily damaged during WWII. Today the building houses a cultural center.
Image by Kleon3 on Wikimedia under Creative Commons License.
2

Built between 1267 and 1280, Dominikanerkerk is considered to be one of the oldest Gothic structures in the country. The church is located on a street bearing the same name, close to Vrijthof Square. The chapel was added in the 14th century, although a tower that was initially planned was never built. Today this former church houses a large book store and serves as a venue for concerts and lectures.
Image by Otter on Wikimedia under Creative Commons License.
3

The City Hall of Maastricht is a distinctive building located on Market Square. It was designed by Pieter Post, and the first stone was laid in 1659. It was finished in 1684 with the construction of the tower. The Hall represents the Revival style of architecture. The design takes into account the two rulers of that period- the Duke of Brabant and the Prince-Bishop of Liège. The left side of the building was Brabant’s and the right side was designed for Liège. Several original sections of the facade and interior have been renovated. The chimneys were demolished.
Image by Phernambucq on Wikimedia under Creative Commons License.
4

Het Dinghuis is a Gothic building erected around 1470. It is located in the center of the city at the end of one of Maastricht's busiest streets. Het Dinguis was the highest building in the city at the time of its construction. The facade is half-timbered and also built of Namur stone and marl. The Dinghuis has a large clock with only one hand and a bell that still functions to this day. Over the years, the building has served as a high court, a city prison and even a theater. Today the building is occupied by the Maastricht Tourist Office.
Image by Eva van Mossevelde on Wikimedia under Creative Commons License.
5

The former Jesuit Church is one of the city’s best examples of Baroque architecture. The church was designed by Jesuit architect Huyssens and was built at the beginning of the 17th century. When the Jesuit order was dissolved a century and a half later, the church was closed and turned into a theater.
Image by Otter on Wikimedia under Creative Commons License.
6

The Spaans, or Spanish, Government Building is one of the oldest non-religious edifices in the city. It is located at the city's central square. Its construction dates back to the 13th century, and it belonged to the local ruler Brabant. It was renovated and enlarged in the 17th century. The building combines the Gothic and Renaissance styles. Three Gothic windows bear the inscription of the Roman Emperor and the coat of arms of Hapsburg.
Image by Cumuluswiki on Wikimedia under Creative Commons License.
7

Sint-Janskerk is one of the most distinctive buildings in the city center. It was erected in honor of St. John the Baptist. The original church was built in the 13th century, but the current church dates back to the 14th century. The church has a distinctive red tower and a small bell called the “gate clock”. The building is one of many Gothic constructions in Maastricht. The church has a three-aisle nave and a choir. Inside you will find a Louis XVI-style pulpit from the 18th century, marble gravestones and several murals.
Image by Euku on Wikimedia under Creative Commons License.
8

The Sint-Lambertuskerk is a church built between 1914 and 1916 and was named after the Maastricht-born saint Lambert. At the time of its completion, it was the first church outside the old city wall. The church was designed in neo-Romanesque style on a cruciform plan. The church was initially operated as a Roman Catholic parish church. Soon after its completion in 1916, subsidence cracks developed in the structure. Ten years later, the church was restored and no further damage occurred until 1970. Beginning in 1970, portions of the structure began to sag and new cracks developed. Since 1985, the church has no longer been in use. As of 2010, the church was undergoing a renovation at a cost of 12 million euros.
Image by Michielverbeek on Wikimedia under Creative Commons License.
Sight description based on wikipedia