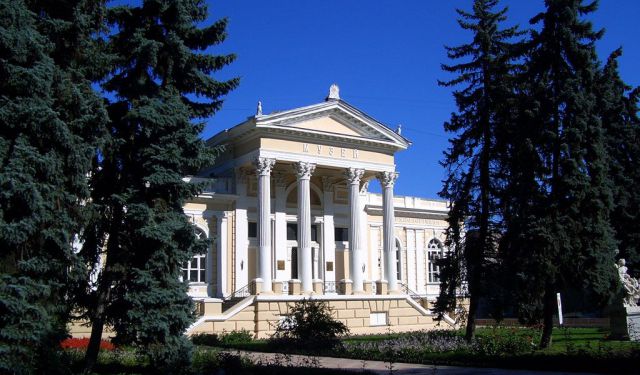 Image by Wastedump on Wikimedia under Creative Commons License.

Odessa is a prominent cultural centre in Ukraine, famous for its fascinating museums. Informative and interesting, they will tell you a lot of interesting things about the city’s history, sea life, prominent historic personalities, fine art and rich culture. Take the following self-guided tour to discover the most interesting museums in Odessa!
How it works: Download the app "GPSmyCity: Walks in 1K+ Cities" from iTunes App Store or Google Play to your mobile phone or tablet. The app turns your mobile device into a personal tour guide and its built-in GPS navigation functions guide you from one tour stop to next. The app works offline, so no data plan is needed when traveling abroad.

Situated near Customs Square, the Odessa Sea Port Museum, dedicated to François-Paul Sainte de Wollant, recounts the history of Odessa sea port, one of the largest ports in the Black Sea. The museum was founded in 1990 and houses 5 halls, where you will find numerous informative and interesting exhibits.

Image by Finitor on Wikimedia under Creative Commons License.
2

The Odessa Archaeological Museum, located on Lanzheronovskaya Street, is one of the oldest archaeological museums in Ukraine and the post-Soviet countries which was founded in 1825. Since 1997 Odessa archeological museum functions not only as a museum but also as institute of scientific research. The major directions of scientific research of Odessa museum are: archeology of primitive society in Northern Black Sea region, archeology of the Middle Ages. The museum conducts expositions, restorations and publishing activities.

The museums possesses more than 160000 exhibits: archeological finds of The Black Sea Northern region, the largest in Ukraine collection of Ancient Egypt (sarcophagi, stone slabs with hieroglyphics and fragments of papyrus, funeral inventory); Ancient Greece and Ancient Rome exhibits. The museum is also famous by its collection of coins and medals. There are over 50000 coins in the museum treasury: Ancient Greece, Ancient Rome, Byzantine Empire, Ancient Kievan Rus, coins of Russian Empire Romanovs' dynasty.

Image by ILESH on Flickr under Creative Commons License.
Sight description based on wikipedia
3

The Odessa Maritime Museum is located in the building that was initially the English Club until 1842. The museum documents the rich history of sailing and shipbuilding in the Odessa region from ancient times to nowadays. There is a wide collection of ship models, important documents, pictures, etc.
Image by Stan Shebs on Wikimedia under Creative Commons License.
4

The Odessa Wax Works Museum was founded in 1998 and is situated on Rishelievskaya Street, near the Odessa Opera and Ballet Theatre. The museum will surprise you with its amazing collection of fine wax sculptures of prominent historic people of Odessa, as well as famous contemporary heroes of music, film industry and animation.

The Odessa Numismatics Museum is a currency museum that preserves and exhibits ancient relics from the Northern Black Sea Region and Rus-Ukraine. The Museum has two branches located in the center of Odessa: at 33 Grecheskaya Str. — Exhibition of ancient and medieval coins, old and modern Ukrainian banknotes; antique pottery of the Northern Black Sea region and fine art of Kievan Rus'; and at 5 Catherine's Sq. — Coin Gallery.

In the early 1970s the museum first appeared in Odessa. It was given the name "Old Odessa" and set up in the watchtower of the old destroyed fortress located in Shevchenko Park. Over the last 10 years the museum has concentrated on the augmentation, preservation and study of historical relics and the cultural heritage of the Ukrainian people. This in turn has brought numerous awards from the Ukrainian Parliament, Government, National Bank of Ukraine and from the authorities of the Odessa region and Odessa city.

The museum maintains contacts with scientific, historical and cultural organizations in 100 countries of the World. The museum collections include over 2500 coins and other relics from different historical eras: from antiquity and the Middle Ages to modern times including the period of the formation of the modern Ukrainian state. The core of the collection is a collection of ancient coins minted by various city states, and especially of the Bosporan Kingdom which existed in the Northern Black Sea Region for almost a thousand years.

The Museum of Philiki Etairia was founded in 1979 as a branch of Historical and Folk Art Museum of Odessa. Now this museum is part of Odessa Hellenic Foundation for Culture and focuses on folk art, boasting an interesting collection.

The Odessa Museum of Local Lore is a fascinating museum that is situated on Gavannaya Street, near the City Garden. Founded in 1956, the museum displays interesting documents, publications, objects of applied and fine arts, numismatic collections, guns of the XVII-XIX centuries and other excellent exhibits relating to the history of the city and the province.