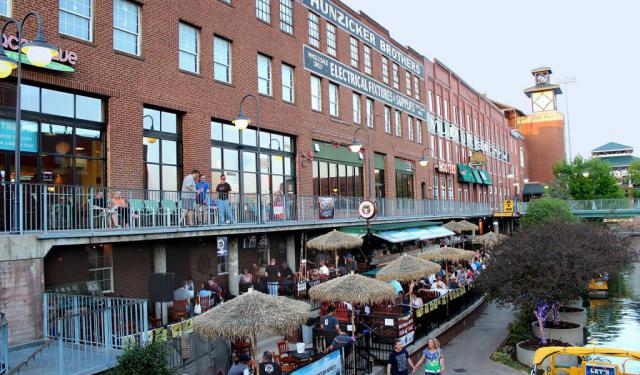 Image by Soonerfever on Wikimedia under Creative Commons License.

Oklahoma City, the capital of Oklahoma state, is known for its cowboy culture and capitol complex, surrounded by working oil wells. Other places of interest include Myriad Botanical Gardens, Oklahoma City Museum of Art, Bricktown, as well as the Oklahoma City National Memorial commemorating victims of the 1995 bombing of the Alfred P. Murrah Federal Building. To learn more about Oklahoma City attractions, follow this orientation walk.
How it works: Download the app "GPSmyCity: Walks in 1K+ Cities" from iTunes App Store or Google Play to your mobile phone or tablet. The app turns your mobile device into a personal tour guide and its built-in GPS navigation functions guide you from one tour stop to next. The app works offline, so no data plan is needed when traveling abroad.

The Gates of Time are monumental twin bronze gates that frame the moment of destruction - 9:02 - and mark the formal entrances to the Outdoor Memorial. 9:01, found on the eastern gate, represents the last moments of peace, while its opposite on the western gate, 9:03, represents the first moments of recovery. Both time stamps are inscribed on the interior of the monument, facing each other and the Reflecting Pool.

The Field of Empty Chairs consists of 168 empty chairs hand-crafted from glass, bronze, and stone represent those who lost their lives, with a name etched in the glass base of each. They sit on the site where the Murrah Building once stood. The chairs represent the empty chairs at the dinner tables of the victims' families. The Memorial has an average of 350,000 visitors per year.

Image by Daniel Mayer on Wikimedia under Creative Commons License.
Sight description based on wikipedia
2

The Oklahoma City Museum of Art (OCMOA) is a museum located in the Donald W. Reynolds Visual Arts Center in Oklahoma City, Oklahoma, USA. The museum features visiting exhibits; original selections from its own collection; a theater showing a variety of foreign, independent, and classic films each week; and a restaurant. OKCMOA is also home to the most comprehensive collection of Chihuly glass in the world including the fifty-five foot Eleanor Blake Kirkpatrick Memorial Tower in the Museum's atrium.

Oklahoma Tower is a notorious building, situated in the central bussiness district of oklhoma City. It was built in 1982 and is is 434ft (132m) tall Hving 31 floors this skyscraper is the fourth tallest building in Oklahoma City and was rnked the 8th in Oklahoma.
Image by Doug Loudenback on Wikimedia under Creative Commons License.
4

The Chase Tower is the tallest building in the Oklahoma City since 1971 and was ranked the 5th in Oklahoma state. This skyscraper is located in the central business district of Oklahoma City, being 152.4 meters (500 feet) high. It has got 36 floors, 10 elevators and houses Chase Bank, the Petroleum Club, law firms.
Image by rutlo on Wikimedia under Creative Commons License.
Sight description based on wikipedia
5

Bricktown Brewery opened in 1992 and is housed in the historical turn-of-the-century building on Oklahoma Avenue. It is considered one of the best breweries in the Southwest. They offer a full menu of American items specializing in BBQ, award winning beers as well as a variety of entertaining activities. There's a full bar on its two levels. Upstairs there are a couple of pool tables, darts, classic arcade games and more. Multiple TVs are mounted on the walls to watch the game being broadcast. They brew 5 handcrafted beers depending on the season. There is live entertainment on weekends. Hours: Monday to Thursday 11:00 am - 12:00 pm, Fridays & Saturdays 11:00 am - 1:30 pm, Sundays 11:00 am - 10:00 pm.
Image by Alan Glasco on Flickr under Creative Commons License.
6

TapWerks sits in the heart of the city’s Entertainment District. The city’s oldest Tap House has more than two hundred taps and offers more than one hundred bottled beers from around the world, the greatest selection in the State of Oklahoma. This ale house provides a unique, smoke-free dining environment featuring high ceilings and a large bar on the main floor. Upstairs there is a smoking zone, pool tables, dart boards, video games and a jukebox. On weekends they have live music performances. It’s a fun spot to hang out.
Image by dave_stone on Flickr under Creative Commons License.
7

Bricktown is an entertainment district just east of downtown Oklahoma City. The major attractions of the district are the Chickasaw Bricktown Ballpark, the navigable Bricktown Canal, and the 16-screen Harkins movie theatre. Toby Keith's I Love This Bar & Grill is located in Bricktown, as is the corporate headquarters of Sonic Drive-In. The district's boundaries include the Oklahoma River on the south, I-235 on the east.

District is as follows: An area bordered generally by the BNSF Railway; Reno Avenue; Centennial Expressway; and the railroad right-of-way between Main and NE 1st. Four railroad companies had freight operations east of the Santa Fe tracks in what is now Bricktown in the late 19th and early 20th century. The district contains a number of public sculptures and murals, including a monument to the Oklahoma Land Run. An annual Bricktown Art Festival is held in mid-July.

9) The Myriad Botanical Gardens (must see)

The Myriad Botanical Gardens is a 17-acre (69,000 m2) botanical garden located in downtown Oklahoma City, on the southwest corner of Reno and Robinson. The Gardens is home to multiple tiers of densely landscaped areas that surround a sunken lake. Its primary feature is the Crystal Bridge Tropical Conservatory - a 224-foot (68 m) living plant museum featuring towering palm trees, tropical plants and flowers, waterfalls, and exotic animals.

The first talk of cultivating a garden in downtown Oklahoma City began in 1964 when City leaders commissioned renowned architect I.M. Pei to create a revitalization plan for downtown Oklahoma City. The effort was led by Oklahoma City oil pioneer Dean A McGee (1904-1989), Founder and CEO of Kerr-McGee Oil Corporation. McGee took up the project of pursuing the Gardens, and continued working on their completion up until his death in 1989. The Myriad Botanical Gardens is home to several pieces of art.